There are several techniques used in recombinant DNA technology or gene manipulation. 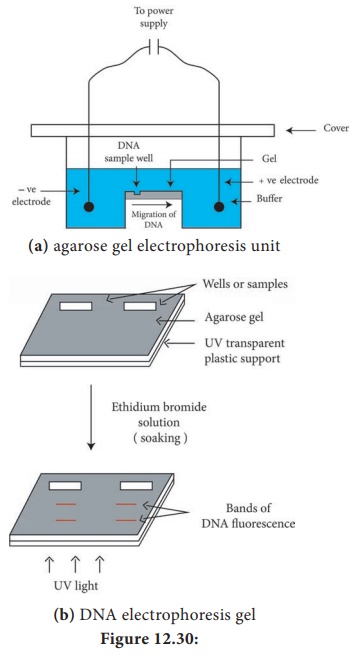 A genomic library is a collection of clones that contains at least one copy of every DNA sequence in an organism’s genome. Like libraries with books, genomic libraries are a great source of information; in this case, the information is about the genome. Specific sequences in cDNA libraries and genomic libraries can be identified via a number of approaches, including the use of specific antibodies, cDNA probes and oligonucleotide probes

Human artificial chromosome (HAC)-based vectors offer a promising system for delivery and expression of full-length human genes of any size into human cells, and a tool for determining human chromosome function. It does not have the problem of limited cloning capacity of other vectors, and it also avoids possible insertional mutagenesis caused by integration into host chromosomes by viral vector.

2. The gel is placed in an electrophoresis apparatus and covered with buffer solution.

3. The DNA samples along with tracer dye are placed in the wells of gel

4. Power supply is switched on and gel is run till the tracer dye reaches the end of the gel.

As the DNA is negatively charged, DNA fragments move through the gel towards the positive electrode. The rate of migration of DNA is dependent on the size and shape. In general, smaller linear fragments move faster than the larger ones. Hence, gel electrophoresis can be conveniently used for the separation of a mixture of DNA fragments, based on their size. The bands of the DNA can be detected by soaking the gel in ethidium bromide solution (Ethidium bromide can also be added to molten agarose prior to setting the gel). When activated by ultraviolet radiation, DNA base pairs in association with ethidium bromide, emit orange fluorescence. And in this way the DNA fragments separated in agarose electrophoresis can be identified (Figure 12.30b).

PAGE is composed of chains of acryl amide monomers crosslinked with methylene bisacryalmide units. The pore size of the gel is dependent on the total concentration of monomers and the cross links. PAGE is used for the separation of single stranded DNA molecules that differ in length by just one nucleotide. Agarose gels cannot be used for this purpose. This is because polyacrylamide gels have smaller pore sizes than agarose gels and allow precise separation of DNA molecule from 10–1500 bp.

HOTS: Explain how gel electrophoresis can be used to determine the size of a PCR product.

The PCR technique has already proven exceptionally valuable in many areas of molecular biology, medicine, and biotechnology. PCR technique has great practical importance and impact on biotechnology. Between 1983 and 1985 American biochemist Kary Mullis developed PCR technique that made it possible to synthesize large quantities of a DNA fragment without cloning it. Mullis received the 1993 Nobel Prize for Chemistry for his invention. PCR is a cell free amplification technique. 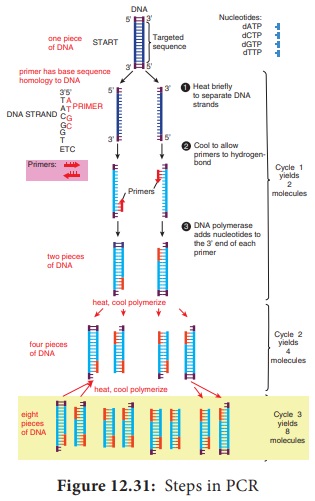 2. Two primers–These are synthetic oligonucleotides, usually about 20 nucleotides long. These are fragments with sequences identical to those flanking the targeted sequence.

Cloned genes and other DNA sequences often are analyzed to determine the arrangement and specific locations of restriction sites. The analytical process involves cleavage of the DNA with restriction enzymes, followed by separation of the resulting DNA fragments by agarose gel electrophoresis. The sizes of the DNA fragments are calculated, enabling restriction maps to be constructed. The many DNA fragments produced by cleaving genomic DNA show a wide range of sizes, resulting in a continuous smear of DNA fragments in the gel. In this case, specific gene fragments can be visualized only by transferring them to membrane filter by southern blotting, hybridizing a specific labelled probe with the DNA fragments, and detecting the hybrids. A similar procedure, Northern blotting is used to analyze the sizes and quantities of RNAs isolated from cell.

1. Denaturation: The target DNA containing the sequence to be amplified is heat denatured to separate its complementary strands at temperature 94 °C–95 °C.

2. Annealing: The temperature is lowered to 37 °C–55 °C so that the primers can hydrogen bond or anneal to the DNA on both sides of the target sequence. Because the primes are present in excess the targeted DNA strands normally anneal to the primers rather than to each other.

The three – step cycle (Figure 12.32) is repeated to obtain copies of target DNA in large numbers. At the end of one cylcle, the targeted sequences on both strands have been copied. When the three step cycle is repeated, the four strands from the first cycle are copied to produce eight fragments. The third cycle yields 16 products. Theoretically, 20 cycles will. produce about one million copies of the target DNA sequence. Each cycle of PCR takes about 3 – 5 minutes. 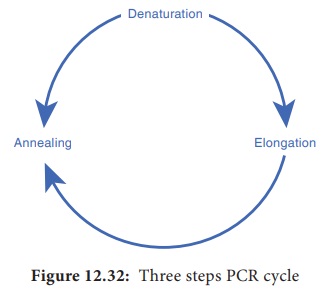 The PCR technique has now been automated and is carried out by a specially designed machine (Figure 12.33) PCR machines are now fully automated and microprocessor controlled. They can process up to 96 samples at a time. PCR machines can carry out 25 cycles and amplify DNA 105 times in as little as 57 minutes. 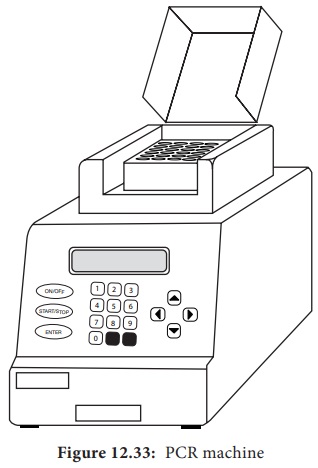 The PCR has many applications in research and in commercial arena, including generating specific DNA segments for cloning or sequencing, amplifying DNA to detect specific genetic defects, and amplifying DNA for fingerprinting in crime scene investigation.

PCR technology is improving continually. Various forms of PCR are available. RNA too can be efficiently used in PCR procedures. Cellular RNAs and RNA viruses may be studied even when the RNA is present in very small amounts (as few as 100 copies can be transcribed and amplified). Quantitative PCR is quite valuable in virology and gene impression studies. PCR is modified as per the specific demands of the situation. Thus there are many variations in the original PCR Examples nested PCR, inverse PCR, reverse transcription PCR, time quantitative PCR, RAPD, RFLP, AFLP.

Both PCR and Cloning allow for the production of many copies of a DNA sequence. What are the advantages of using PCR instead of cloning to amplify a DNA template?

What advantages are there to using a DNA polymerase for PCR that has proofreading activity?

In 1970s American molecular biologists Allan M. Maxam and Walter Gilbert and English biochemist Frederick Sanger developed some of the first techniques for DNA sequencing. Gilbert and Sanger shared the 1980 Nobel Prize for Chemistry for their work. Dideoxy procedure is one of the procedure used to sequence DNA.