Normally, genes and the characteristics they code for are passed down from parent to progeny. This is called vertical gene transfer. Bacteria and some lower eukaryotes are unique in that they can pass DNA from one cell of the same generation to another. The exchange of genes between two cells of the same generation is referred to as horizontal gene transfer. Mechanisms like transformation, transduction and conjugation takes place naturally and may bring about genetic variation and genetic recombination. These gene transfer mechanisms are also employed in genetic engineering to introduce desired gene into the cells. Introducing a foreign gene or recombinant DNA into the cells is one of the techniques used in genetic engineering. The success of cloning depends on the efficiency of gene transfer process. The most commonly employed gene transfer methods are transformation, conjugation, transduction, electroporation, lipofection and direct transfer of DNA. The choice of the method depends on the type of host cell (bacteria, fungi, plant, animal). Figure 12.15 shows methods of DNA transfer 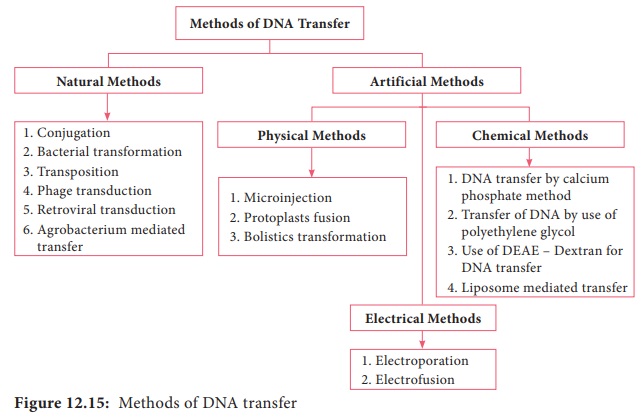 Artificial competence can be induced in laboratory by procedures that involve making the cell passively permeable to DNA. Typically, the cells are incubated in a solution containing divalent cations; most commonly, calcium chloride solution under cold condition, which is then exposed toTransformation is genetic alteration of a cell resulting from the direct uptake, incorporation and expression of exogenous genetic material (exogenous DNA) from its surroundings. Transformation occurs naturally in some species of bacteria, but it can also take place by artificial means in other cells. For transformation to happen, bacteria must be in a state of competence. Competence refers to the state of being able to take up exogenous DNA from the environment. There are two forms of competence: natural and artificial. Transformation works best with DNA from closely- related species. The naturally-competent bacteria carry sets of genes that provide the protein machinery to bring DNA across the cell membrane(s).

There are some differences in the mechanisms of DNA uptake by gram positive and gram negative cells. However, they share some common features that involve related proteins. The DNA first binds to the surface of the competent cells on a DNA receptor, and passes through the cytoplasmic membrane via DNA translocase. Only single stranded DNA may pass through, one strand is therefore degraded by nucleases in the process, and the translocated single-stranded DNA may then be integrated into the bacterial chromosomes. Figure 12.16 shows mechanism of transformation

Artificial competence can be induced in laboratory by procedures that involve making the cell passively permeable to DNA. Typically, the cells are incubated in a solution containing divalent cations; most commonly, calcium chloride solution under cold condition, which is then exposed to a pulse of heat shock. Electroporation is another method of promoting competence. Using this method, the cells are briefly shocked with an electric field of 10–20 kV/ cm which is thought to create holes in the cell membrane through which the plasmid DNA may enter. After the electric shock, the holes are rapidly closed by the cell’s membrane-repair mechanisms. 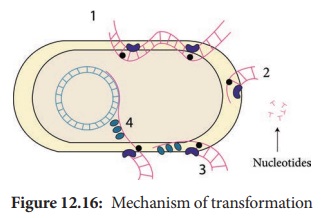 1. Binding of DNA; 2. Degradation of one strand; 3. Entry of ssDNA; 4. Integration into host chromosome.

The initial evidence for bacterial conjugation, came from an experiment performed by Joshua Lederberg and Edward L Tatum in 1946. Later in 1950, Bernard Davis gave evidence that physical contact of the cells was necessary for conjugation. During conjugation, two live bacteria (a donor and a recipient) come together, join by cytoplasmic bridges (e.g. pilus) and transfer single stranded DNA (from donor to recipient).

Inside the recipient cell, the new DNA may integrate with the chromosome (rather rare) or may remain free (as is the case with plasmids). Conjugation can occur among the cells from different genera of bacteria, while transformation takes place among the cells of a bacterial genus.

A plasmid called the fertility or F factor plays a major role in conjugation. The F factor is about 100 kilobases long and bears genes responsible for cell attachment and plasmid transfer between specific bacterial strains during conjugation. F factor is made up of

Thus, the F factor is an episome - a genetic material that can exist outside the bacterial chromosome or be integrated into it.

During F+ × F – mating or conjugation (Figure 12.17a) the F factor replicates by the rolling circle mechanism and a copy moves to the recipient. The channel for DNA transfer could be either the hollow F pilus or a special conjugation bridge formed upon contact. The entering strand is copied to produce double – stranded DNA.

F factor can integrate into the bacterial chromosome at several different locations by recombination between homologous insertion sequences present on both the plasmid and host chromosomes. The integration of F factor into bacterial chromosome results in formation of HFR (High Frequency Recombination) cell. When integrated, the Fplasmid’s tra operon is still functional; the plasmid can direct the synthesis of pili, carry out rolling circle replication, and transfer genetic material to an F- recipient cell. An HFR cell is so called because it exhibits a very high efficiency of chromosomal gene transfer in comparison with F+ cells. In F+ cells the independent F factor rarely transfer chromosomal genes hence the recombination frequency is low. Figure 12.17b shows formation of HFR cell. When an HFR cell is mated with F- cell the F- recipient does not become F+ unless the whole chromosome is transferred as explained in Figure 12.17c. The connection usually breaks before this process is finished. Thus, complete F factor usually is not transferred, and the recipient remains F-.

Because the F plasmid is an episome, it can leave (deintegrate) the bacterial chromosome. Sometimes during this process, the plasmid makes an error in excision and picks up a portion of the chromosomal material to form an F′ plasmid. Figure 12.17d shows formation of F′. During F′XF- conjugation (Figure 12.17e) the recipient becomes F′ and is a partially diploid since it has two set of the genes carried by the plasmid.

The natural phenomenon of conjugation is now exploited for gene transfer and Recombinant DNA technology. In general, the plasmids lack conjugative functions and therefore, they are not as such capable of transferring DNA to the recipient cells. However, some plasmids with conjugative properties can be prepared and used. 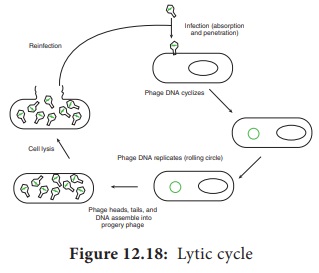 After infecting the host cell, a bacteriophage (phage for short) often takes control and forces the host to make many copies of the virus. Eventually the host bacterium bursts or lyses and releases new phages. This reproductive cycle is called a lytic cycle because it ends in lysis of the host.

1. Attachment - Virus particle attaches to a specific receptor site on the bacterial surface.

2. Penetration - the genetic material, which is often double stranded DNA, then enters the cell.

3. Biosynthesis - After adsorption and penetration, the virus chromosome forces the bacterium to make viral components-viral nucleic acids and proteins.

4. Assembly - Phages are assembled from the virus components. Phage nucleic acid is packed within the virus’s protein coat.

Bacterial viruses that reproduce using a lytic cycle often are called virulent bacteriophages (e.g. T phages) because they destroy the host cell. The genome of many DNA phages such as the lambda phage, after adsorption and penetration do not take control of its host and does not destroy the host. Instead the viral genome remains within the host cell and is reproduced along with the bacterial chromosome. The infected bacteria may multiply for long periods while appearing perfectly normal. Each of these infected bacteria can produce phages and lyses under appropriate environmental conditions. This relationship between phage and its host is called lysogeny (Figure 12.19). 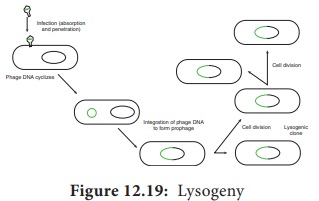 Bactera that can produce phage particles under some conditions are said to be lysogens or lysogenic bacteria. Phages which are able to establish lysogeny are called temperate phages

The latent form of virus genome that remains within the host without destroying the host is called the prophage.

The prophage usually is integrated into the bacterial genome. Sometimes phage reproduction is triggered in a lysogenized culture by exposure to UV radiation or other factors. The lysosomes are then destroyed and new phages released – This phenomenon is called induction (Figure 12.20).

Sometimes, bacterial genes are incorporated into a phage capsid because of errors made during the virus life cycle. The virus containing these genes then infects them into another bacterium, resulting in the transfer of genes from one bacterium to the other. Transduction may be the most common mechanism for gene exchange and recombination in bacteria.

There are two very different kinds of transduction.

(Figure 12.21a) occurs during the lytic cycle of virulent and temperate phages. During the assembly stage, when the viral chromosomes are packaged into protein capsids, random fragments of the partially degraded bacterial chromosome also may be packaged by mistake. The resulting virus particles often injects the DNA into another bacterial cell but does not initiate a lytic cycle. Thus in generalized transduction any part of the bacterial chromosome can be transferred. Once the DNA has been injected it may integrate into the recipient cell’s chromosome to preserve the transferred genes. About 70 to 90% of the transferred DNA is not integrated but is often able to survive and express itself. However, if the transferred DNA is degraded gene transfer is unsuccessful. 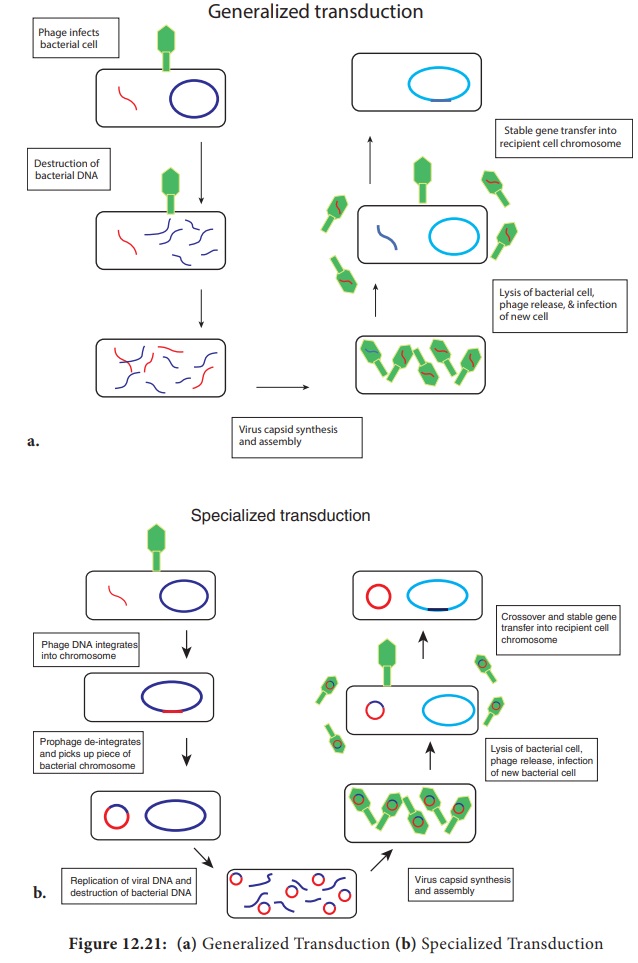 The chromosomes of bacteria, viruses, and eukaryotic cells contain pieces of DNA that move around the genome. Such movement is called transposition. DNA segments that carry the genes required for this process and consequently move about chromosomes are transposable elements or transposons. Transposons are also called jumping genes because they can jump from one DNA to another, resulting in mutation of the cell. They were first discovered in 1951 by Barbara McClintock whose significant discovery was ignored by scientific community for many years. She was awarded the Nobel Prize in 1983.