One of the practical applications of microbial genetics and the technology arising from it is the recombinant DNA technology.

One of the practical applications of microbial genetics and the technology arising from it is the recombinant DNA technology. The deliberate modification of an organism’s genetic information by directly changing its nucleic acid genome is called genetic engineering and is accomplished by a collection of methods known as recombinant DNA technology. Recombinant DNA technology opens up totally new areas of research and applied biology. Thus, it is an essential part of biotechnology, which is now experiencing a stage of exceptionally rapid growth and development. In general sense, recombination is the process in which one or more nucleic acids molecules are rearranged or combined to produce a new nucleotide sequence. Usually genetic material from two parents is combined to produce a recombinant chromosome with a new, different genotype. Recombination results in a new arrangement of genes or parts of genes and normally is accompanied by a phenotypic change

There are many diverse and complex techniques involved in gene manipulation. However, the basic principles of recombinant DNA technology are reasonably simple, and broadly involve the following stages (Figure 12.22). 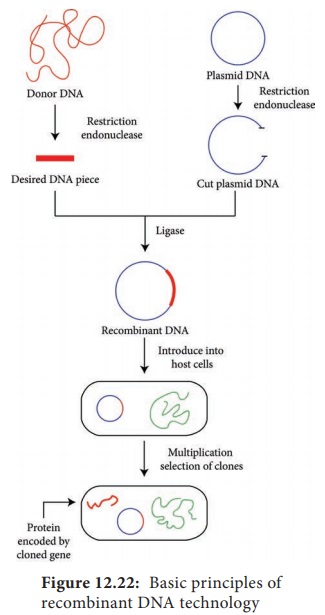 1. Isolation of DNA from the source (Donor)

2. Generation of DNA fragments and selection of the desired piece of DNA

3. Insertion of the selected DNA into a cloning vector (Example: a plasmid) to create a recombinant DNA or chimeric DNA.

4. Introduction of the recombinant vectors into host cells (Example: bacteria)

5. Multiplication and selection of clones containing the recombinant molecules

6. Expression of the gene to produce the desired product.

Cloning in the molecular biology sense (as opposed to cloning whole organisms) is the making of many copies of a segment of DNA, such as a gene. Cloning makes it possible to generate large amounts of pure DNA, such as genes, which can then be manipulated in various ways, including mapping, sequencing, mutating and transforming cells. An overview of cloning strategies in recombinant DNA technology is shown in Figure 12.23 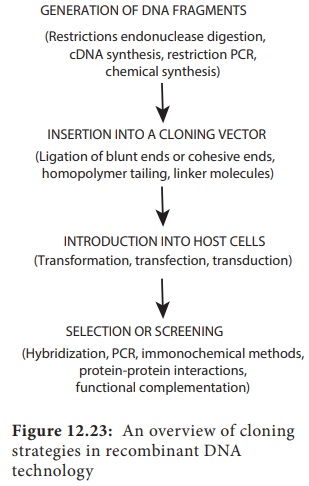