In the preceding lesson, our discussion focused extensively on dc circuits having resistances with either inductor () or capacitor () (i.e., single storage element) but not both. Dynamic response of such first order system has been studied and discussed in detail. The presence of resistance, inductance, and capacitance in the dc circuit introduces at least a second order differential equation or by two simultaneous coupled linear first order differential equations. We shall see in next section that the complexity of analysis of second order circuits increases significantly when compared with that encountered with first order circuits. Initial conditions for the circuit variables and their derivatives play an important role and this is very crucial to analyze a second order dynamic system.

Response of a series R-L-C circuit

Consider a series RLcircuit as shown in fig.11.1, and it is excited with a dc voltage source C−−sV.

Applying around the closed path for ,

The current through the capacitor can be written as Substituting the current ‘’expression in eq.(11.1)  and rearranging the terms,

Since the system is linear, the nature of steady state response is same as that of forcing function (input voltage) and it is given by a constant value. Now, the first part of the total response is completely dies out with time while and it is defined as a transient or natural response of the system. The natural or transient response (see Appendix in Lesson-10) of second order differential equation can be obtained from the homogeneous equation (i.e., from force free system) that is expressed by

and solving the roots of this equation (11.5) on that associated with transient part of the complete solution (eq.11.3) and they are given below.

The roots of the characteristic equation are classified in three groups depending upon the values of the parameters ,,RLand of the circuit

Case-A (overdamped response): That the roots are distinct with negative real parts. Under this situation, the natural or transient part of the complete solution is written as

and each term of the above expression decays exponentially and ultimately reduces to zero as and it is termed as overdamped response of input free system. A system that is overdamped responds slowly to any change in excitation. It may be noted that the exponential term t→∞11tAeαtakes longer time to decay its value to zero than the term21tAeα. One can introduce a factorξ that provides an information about the speed of system response and it is defined by damping ratio 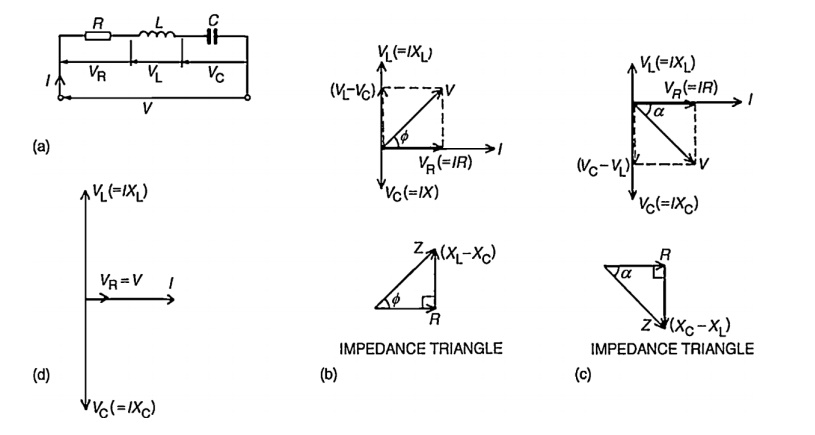 Consider a circuit in which R, L, and C are connected in series with each other across ac supply as shown in fig.

The ac supply is given by, V = Vm sin wt

The circuit draws a current I. Due to that different voltage drops are,

3.     Voltage drop across Capacitance C is Vc = IXc The characteristics of three drops are,

6.     Add that with VRby law of parallelogram to get supply voltage.

The phasor diagram depends on the condition of magnitude of VL and Vc which ultimately depends on values of XL and Xc.

Hence the resultant of VL and Vc will directed towards Vc i.e current is said to be capacitive in nature

So VL and Vc cancel each other and the resultant is zero. So V = VR in such a case, the circuit is purely resistive in nature.

In general for RLC series circuit impedance is given by, Z = R + j X

The average power consumed by circuit is,

Thus, for any condition, XL > Xc or XL < Xc General power can be expressed as