Deposition of fibrin and platelets in the vasculature leads to thromboembolic diseases that are responsible for considerable mortality and morbidity.

Deposition of fibrin and platelets in the vasculature leads to thromboembolic diseases that are responsible for considerable mortality and morbidity. Early thrombolytic therapy can decrease mortality and improve coronary artery patency in patients with acute myocardial infarction (AMI). During fibrinoly-sis, the inactive zymogen plasminogen is enzymati-cally converted to the active moiety, plasmin, which in turn digests the insoluble fibrin matrix of a thrombus to soluble fibrin degradation products. Tissue-type plasminogen activator (t-PA) exhibits fibrin-specific plasminogen activation with minimal systemic fibrinogenolysis. The relative absence of systemic fibrinogenolysis with t-PA means that there are fewer systemic side effects compared to other plasminogen activators. Mean t-PA antigen concen-trations at rest in humans are approximately 5 µg/mL and can increase 1.5- to 2-fold in venous occlusion (Holvoet et al., 1987).

Native t-PA is a serine protease synthesized by vascular endothelial cells as a single-chain polypep-tide of 527 amino acids with a molecular mass of 64 kDa (Pennica et al., 1983). Approximately 6% to 8% of the molecular mass consists of carbohydrate. A schematic of the primary structure of human t-PA is shown in Figure 2. There are 17 disulfide bridges and an additional free cysteine at position 83, and 4putative N-linked glycosylation sites recognized by the consensus sequence Asn-X-Ser/Thr at residues 117, 184, 218, and 448 (Pennica et al., 1983). In addition, the presence of a fucose attached to Thr61 via an O-glycosidic linkage has been reported (Harris et al., 1991). Two forms of t-PA that differ by the absence or presence of a carbohydrate at Asp184 have been characterized (Bennett, 1983): Type I t-PA is glycosylated at asparagine 117, 184, and 448; whereas 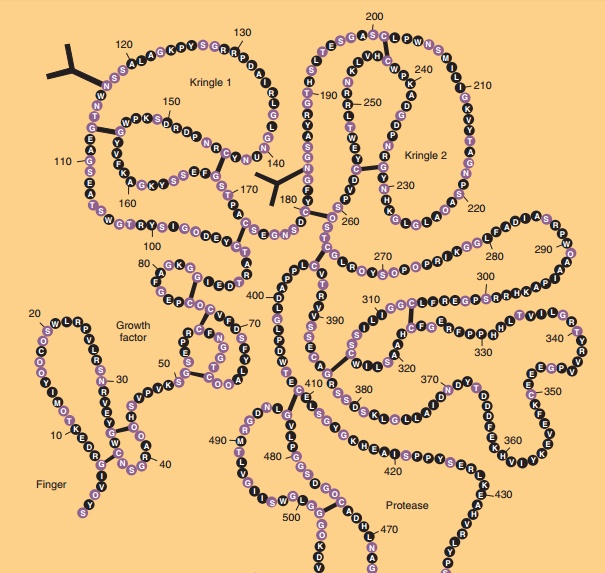 Type II t-PA lacks a glycosylation at asparagine 184. The asparagine at amino acid 218 is normally not occupied in either form of t-PA (Vehar et al., 1984b). Asparagine 117 contains a high-mannose oligosac-charide whereas Asn184 and Asn448 are of the complex carbohydrate type (Spellman et al., 1989). Complex N-linked glycan structures contain a dis-accharide Gal (1,4)GlcNac and terminate in sialic acid residues, while an oligomannose (high mannose)-type glycan contains only mannose in the outer arms.

During fibrinolysis, the single-chain t-PA poly-peptide is cleaved between Arg275 and Ile276 by plasmin to yield two-chain t-PA. Two-chain t-PA consists of a heavy chain (A-chain) derived from the amino terminus and a light chain (B-chain) linked by a single disulfide bridge between Cys264 and Cys395. The A-chain consists of the finger, growth factor, and two kringle domains. The finger domain and the second kringle are responsible for t-PA binding to fibrin and for the activation of plasminogen. The function of the first kringle is not known. The B-chain contains the serine protease domain consisting of the His-Asp-Ser triad that cleaves plasminogen (Pennica et al., 1983).