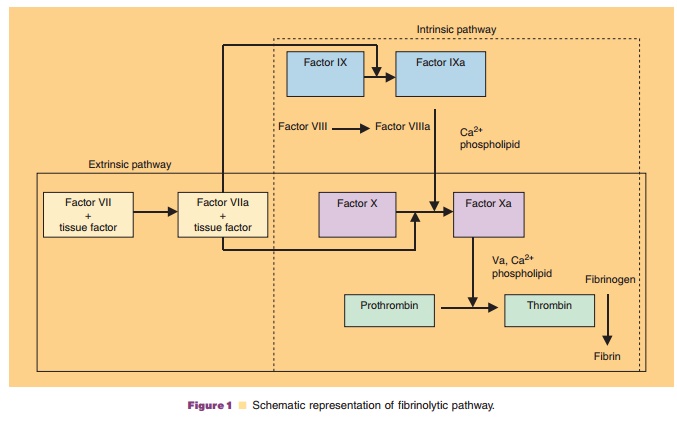 The potency of recombinant factor IX is deter-mined in IUs using an in vitro clotting assay. One international unit is the amount of factor IX activity present in a milliliter of pooled normal human plasma. The specific activity of BeneFix is greater than or equal to 200 IU/mg protein.

Recombinant factor IX (BeneFix ) is supplied as a sterile, non-pyrogenic, lyophilized powder in single-use vials containing nominally 250, 500, or 1000 IU per vial. The approved shelf life is 36 months at 2 C to 8 C. The product has been stored at room temperature (25 C) for up to 12 months. Freezing should be avoided to prevent damage to the diluent vial.

Recombinant factor IX should be reconstituted with the sterile water for injection (diluent) provided. After reconstitution, BeneFix should be injected intravenously over several minutes. The product does not contain a preservative and should be used within 3 hours of reconstitution.

The pharmacokinetics of recombinant factor IX and of plasma-derived factor IX are summarized in Table 2. The in vivo recovery using BeneFix was 28% less than the recovery using highly purified plasma-derived factor IX, whereas there was no difference in the biological half-life. Factor IX clotting activity is highly correlated (r¼ 0.97) with plasma concentra-tions of recombinant factor IX (White et al., 1998).

The dosage and duration of substitution treat-ment depends on the severity of factor IX deficiency, the location and extent of bleeding, the clinical condition, patient age, and the desired recovery in factor IX. The dose of BeneFix should be based on the empirical finding that 1 IU of factor IX per kilogram is expected, on average, to increase the circulating level of factor IX by 0.8 ± 0.2 IU/dL (range 0.4–1.4).

Higher doses of factor IX may be necessary in patients with inhibitors. If the expected levels of factor IX are not attained, or if bleeding is not controlled, biological testing may be merited to determine if factor IX inhibitors are present.

Since BeneFix is produced in a CHO cell line, it may be contraindicated in patients with known history of hypersensitivity to hamster protein and other consti-tuents in the preparation. During uncontrolled open-label clinical studies with recombinant factor VII, adverse events reported in more than 2% of patients included nausea, taste perversion, injection site reac-tion, injection site pain, headache, dizziness, allergic rhinitis, rash, hives, flushing, fever, and shaking.