Factor VIII (antihemophilia factor) is a plasma protein that functions as a cofactor by increasing the maximum catabolic capacity (Vmax) in the activation of factor X by factor IXa in the presence of calcium ions and negatively charged phospholipid.

Factor VIII (antihemophilia factor) is a plasma protein that functions as a cofactor by increasing the maximum catabolic capacity (Vmax) in the activation of factor X by factor IXa in the presence of calcium ions and negatively charged phospholipid (Jackson and Nemerson, 1980). The congenital absence of factor VIII is termed hemophilia A and afflicts approxi-mately 1 in 10,000 males (Antonarakis et al., 1987).

Factor VIII is synthesized as a single-chain polypeptide of 2332 amino acids (Eaton et al., 1987). Shortly after synthesis, cleavage occurs, and most plasma factor VIII circulates as an 80-kDa light chain associated with a series of 210-kDa heavy chains in a metal ion-dependent complex. There are 25 potential N-linked glycosylation sites and 22 cysteines (Vehar et al., 1984a).

The concentration of factor VIII in plasma is about 200 ng/mL (Hoyer, 1981). It is not known where factor VIII is synthesized although evidence suggests that several different tissues, including the spleen, liver, and kidney, may play a role. Factor VIII is normally covalently associated with a 50-fold excess of von Willebrand factor. Von Willebrand factor protects factor VIII from proteolytic cleavage and allows concentra-tion at sites of hemostasis. Circulating von Willebrand factor is bound by exposed subendothelium and activated platelets at sites of injury,Ser373, Arg740-Ser741, and Arg1689-Ser1690 results in procoagulant function (Vehar et al., 1984a). While cleavage at Arg740 is not essential for coagulant activity, cleavage at the other two sites is necessary. Although factor VIII is synthesized as a single-chain polypeptide, the single-chain polypeptide is cleaved shortly after synthesis. Most of the factor VIII in plasma exists as an 80-kDa light chain and a series of heavy chains. Factor VIII circulates as a heterodimer of the 80-kDa light chain and a variable (90–210 kDa) heavy chain in a metal ion-dependent complex.

Recombinant factor VIII (rFVIII) is available from three sources: Baxter Hyland, Bayer Corporation, and Wyeth. rFVIII products may be divided into three classes based on the use of human or mammalian-derived raw materials (Table 1). rFVIII from Baxter Hyland (Advate , Recombinate ) and Wyeth (Refacto ) is produced using transfected Chinese hamster ovary (CHO) cells, whereas that from Bayer (Kogenate ) is produced using trans-fected baby hamster kidney cells. A major difference between rFVIII from Bayer and Baxter Hyland is the presence of a Gal 1-> 3Gal carbohydrate moiety in the Baxter product (Hironaka et al., 1992). The recombinant product from Baxter and Bayer consists of full-length factor VIII which, like plasma-derived factor VIII, consists of a dimer of the 80-kDa light chain and a heterogeneous heavy chain of 90 to 210 kDa (Schwartz et al., 1990). The Wyeth product (moroctocog alfa, ReFacto ) is a deletion mutant in which the heavy chain lacks nearly the entire B-domain, which is not needed for clotting activity (Roddie and Ludlam, 1997). After proteolytic clea-vage by thrombin, the activated B-domain-depleted molecule is essentially identical to the activated full-length native rFVIII. 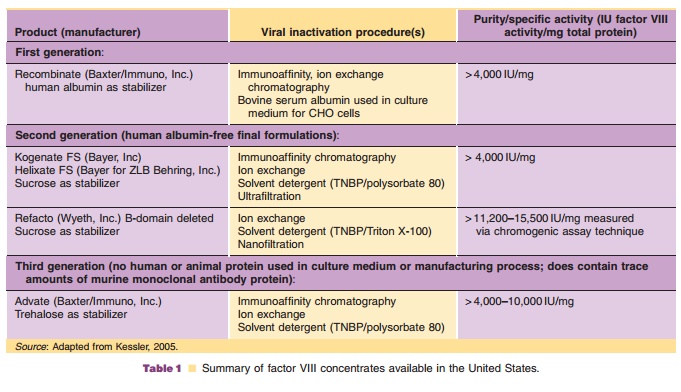 Advate recombinant antihemophilic factor-plasma/ albumin free method (rAHF-PFM, Baxter) is formu-lated as a sterile, non-pyrogenic, lyophilized cake for intravenous injection and is provided in single-dose vials, containing nominally 250, 500, 1000, or 1500 international units (IU). Biological potency is deter-mined using an in vitro assay that employs a factor VIII concentrate standard that is referenced to the World Health Organization (WHO) International Standard for factor VIII:C concentrates. The specific activity is 4000 to 10,000 IU per milligram of protein. The final product contains no preservative nor added human or animal components in the formulation. Recombinant antihemophilic factor is administered only by intravenous infusion following reconstitution with 5 mLsterile water for injection. The product contains mannitol, trehalose, sodium, histidine, Tris, calcium, polysorbate 80, and glutathione. Plastic syringes must be used since the protein can adhere to glass syringes.

rFVIII (Kogenate , Bayer; Recombinate , Baxter; Refacto , Wyeth) is supplied as sterile, single-dose vials containing 250 to 1000 IU of factor VIII. The preparation is lyophilized and stabilized with human albumin (Kogenate and Recombinate ) or polysor-bate 80 (Refacto ). Recently a reformulated product, Kogenate FS (Bayer), has become available. This product is similar to its predecessor Kogenatehistidine. The products contain no preservatives and should be stored at 2 C to 8 C. The lyophilized powder may be stored at room temperature (up to 25 C) for up to 3 months without loss of biological activity. Freezing should be avoided. Factor VIII should be reconstituted with the diluent provided. The reconstituted product must be administered intravenously by direct syringe injection or drip infusion within 3 hours of reconstitution.

rFVIII (Kogenate and Kogenate FS, Bayer Corporation; Recombinate and Advate, Baxter; ReFacto, Wyeth) is indicated in hemophilia A (classi-cal hemophilia) for the prevention and control of bleeding episodes.

The pharmacokinetics of plasma derived and rFVIII are summarized in Table 2. The increase in factor VIII concentration is dose proportional and the disposition is similar following single and chronic dosing. The mean biological half-life was similar for recombinant and plasma-derived factor VIII.

The incidence of inhibitors to recombinant and plasma-derived factor VIII in previously untreated patients is similar, about 20% and 10% to 15%, respectively (McMillan et al., 1988; Lusher et al., 1993). The risk of developing antibodies to rFVIII correlates with severity of disease and the intensity of exposure to factor VIII (Lusher et al., 1993).

Dosage of rFVIII (in IU) must be individualized to the needs of the patient, the severity of the deficiency and of the hemorrhage, the presence of inhibitors, and to the desired increase in factor VIII activity (in IU/dL, or percentage of normal). The in vivo percent elevation in factor VIII level may be estimated as follows (Abildgaard et al., 1966):

Trace amounts of mouse or hamster protein may be present in rFVIII as contaminants from the expression system. Therefore, caution should be exercised when administering rFVIII to individuals with known hypersensitivity to plasma-derived antihemophilic factor, or with hypersensitivity to biological preparations with trace amounts of murine or hamster proteins.