The pharmacokinetics of rt-PA have been studied in mice, rats, rabbits, primates, and humans. After intravenous administration, the plasma concentra-tions decline rapidly with an initial dominant half-life of less than 5 minutes in all species. Plasma clearance ranges from 27 mL/min in rabbits (Hotchkiss et al., 1988) to 29 mL/min in monkeys (Baughman, 1987), to 620 mL/min in humans (Tanswell et al., 1989). rt-PA exhibits non-linear (Michaelis–Menten) pharmacoki-netics at high plasma concentrations (Tanswell et al., 1990). The estimated Michaelis–Menten constant (Km) andVmax values estimated by simultaneously fitting multiple plasma concentration–time curves following several doses were 12 to 15 µg/mL and 3.7µg/mL/h, respectively, with little species variation in these parameters. The pharmacokinetics are essentially linear in cases where plasma concentrations do not exceed 10% to 20% of Km (i.e., 1.5–3 µg/mL). A pharmacokinetic summary of alteplase following intravenous administration in humans is presented in Table 4. These data show that rt-PA has an initial volume of distribution approximating plasma vo-lume, and a rapid plasma clearance. The initial half-life was less than 5 minutes. There was no difference in the pharmacokinetics following the different infu-sion regimens. A lower plasma clearance was notedfollowing intravenous bolus injection, possibly suggesting saturation of clearance mechanisms. 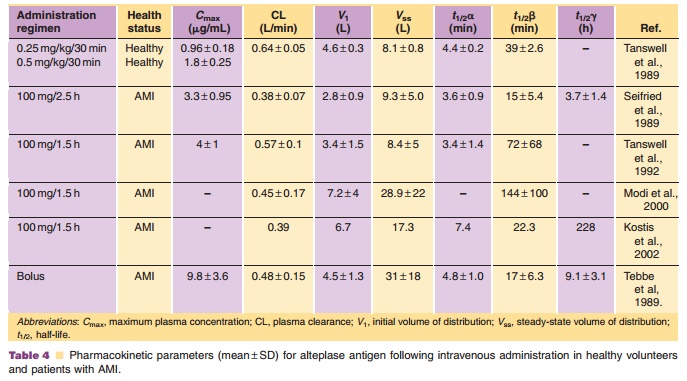 The primary route of alteplase clearance is via receptor-mediated clearance mechanisms in the liver. Three cell types in the liver are responsible for the clearance of t-PA: parenchymal cells, endothelial cells, and Kupffer cells. Kupffer cells and endothelial cells mediate t-PA clearance via the mannose receptor. Parenchymal cells clear t-PA via a carbohydrate-independent, receptor-mediated mechanism. Data suggest that this carbohydrate-independent clearance is mediated by the low-density lipoprotein receptor-related protein (Bu et al., 1993).

Recombinant human t-PA (alteplase t-PA) is indicated for use in the management of AMI in adults for the improvement of ventricular function following AMI, reduction of the incidence of congestive heart failure, reduction of mortality associated with AMI, and for the management of acute massive pulmonary embo-lism in adults. It is also indicated for the management of acute ischemic stroke if therapy is initiated within 3 hours after the onset of stroke symptoms and after exclusion of intracranial hemorrhage by cranial computerized tomography (CT) scan.

For the 3-hour regimen, the recommended dose is 100 mg administered as 60 mg in the first hour (6–10 mg as a bolus), and 20 mg over each of the second and third hours. For patients weighing less than 65 kg, the dose is 1.25 mg/kg over 3 hours. Infarct artery-related patency rates of 70% to 77% are achieved at 90 minutes with this 3-hour regimen (Vestraete et al., 1985). Patency grades of blood flow in the infarct-related artery are defined by the Thrombolysis in Myocardial Infarction (TIMI) scale and are assessed angiographically with TIMI Grade 0 representing no flow; Grade 1, minimal flow; Grade 2, sluggish flow; and Grade 3, complete or full, brisk flow.

The efficacy of the accelerated 90-minute regi-men was demonstrated in an international, multi-center trial, Global Utilization of Streptokinase and Tissue Plasminogen Activator for Occluded Coronary Arteries (GUSTO), that enrolled approximately 41,000 patients (The GUSTO Investigators, 1993a,b). The GUSTO trial demonstrated a higher infarct-related artery patency rate at 90 minutes in the group treated with rt-PA with heparin compared with streptokinase with either intravenous or subcutaneous heparin. The patency in the alteplase group was 81.3% compared with 53.5% to 59.0% in the streptokinase groups. In addition, the alteplase group had a reduced mortality (an additional 10 lives saved per 10,000 patients treated). The intracranial hemorrhage rate was ap-proximately 1%.

In a multicenter, open-label study in 461 patients with AMI randomized to receive 100 mg alteplase over 90 minutes or two 50-mg bolus doses 30 minutes apart, the 90-minute angiographic patency rate was 74.5% for the double bolus group and 81.4% in the infusion group (p¼ 0.08). The 30-day mortality rates were 4.5% in the bolus group and 1.7% in the infusion group (not significantly different) (Bleich et al., 1998). Similarly, the Continuous Infusion Versus Double-Bolus Administration of Alteplase (COBALT) trial in 7,169 patients with AMI showed a higher incidence of 30-day mortality in the double bolus alteplase group (7.98%) compared with the accelerated-infusion group (7.53%). There was also a slightly higher incidence of intracranial hemorrhage in the double bolus group (COBALT Investigators, 1997).

For acute ischemic stroke, the recommended dose is 0.9 mg/kg not to exceed 90 mg infused over 60 minutes, with 10% of the total dose administered as an initial intravenous bolus over 1 minute. The safety and efficacy of this regimen with concomitant use of heparin and aspirin during the first 24 hours has not been investigated.

The recommended dose for treatment of pul-monary embolism is 100 mg administered by intrave-nous infusion over 2 hours. Heparin therapy should be instituted or reinstituted near the end of or immediately following alteplase infusion when the partial thromboplastin time or thrombin time returns to twice normal or less.

Since thrombolytic therapy increases the risk of bleeding, alteplase is contraindicated in patients with a history of cerebrovascular accidents, or patients who have any kind of active internal bleeding, intracranial neoplasm, arteriovenous malformation, or aneurism or who have had recent intracranial or intraspinal surgery or trauma.

Recombinant human t-PA (Alteplase; Activase , Genentech, Inc; Actilyse , Boehringer Ingelheim) is supplied as a sterile, white to off-white lyophilized powder. rt-PA is practically insoluble in water, and arginine is included in the formulation to increase aqueous solubility. Phosphoric acid and/or sodium hydroxide may be used to adjust the pH. The sterile lyophilized powder should be stored at controlled room temperatures not to exceed 30 C, or refrigerated at 2 C to 8 C, and it should be protected from excessive light.

The powder is reconstituted by adding the accompanying sterile water for injection, USP to the vial, resulting in a colorless to pale yellow transparent solution containing 1 mg/mL rt-PA, with a pH of approximately 7.3 and an osmolality of approximately 215 mOs/kg. rt-PA is stable in solution over a pH range of 5 to 7.5. Since the reconstituted solution does not contain any preservatives, it should be used within 8 hours of preparation and should be refrigerated before use. The solution is incompatible with bacterio-static water for injection. Other solutions such as sterile water for injection or preservative-containing solutions should not be used for further dilution. The 1-mg/mL solution can be diluted further with an equal volume of 0.9% sodium chloride for injection, USP or 5% dextrose injection, USP to yield a solution with a concentration of 0.5 mg/mL. This solution is compatible with glass bottles and polyvinyl chloride bags.