Tenecteplase (TNKase TM, Genentech, Inc.) is a t-PA variant that has amino acid substitutions in three regions of t-PA.

Tenecteplase (TNKaseTM, Genentech, Inc.) is a t-PA variant that has amino acid substitutions in three regions of t-PA. Replacement of threonine at amino acid 103 by asparagine (T103N) incorporates a complex oligosaccharide carbohydrate structure at this position. Replacement of arginine at position 117by glutamine (N117Q) results in removal of the high mannose carbohydrate present at this site. A tetra-alanine substitution at positions 496 through 499 (KHRR496-499AAAA) contributes to increased fibrin specificity. These three design modifications result in a thrombolytic that, compared to the parent t-PA molecule, is approximately 10- to 14-fold more fibrin specific, is 80-fold more resistant to local inactivation, and has an 8-fold slower clearance in rabbits (Keyt et al., 1994). Allometric scaling of pharmacokinetic data in animals predicted that tenecteplase would have a 5-fold slower plasma clearance compared with alteplase (McCluskey et al., 1997).

Enzymatic removal of terminal sialic acid from tenecteplase has been shown to increase the clearance in rabbits and is likely due to increased exposure of underlying galactose sugars. This desialylation effect is more profound with tenecteplase than with alteplase and is probably due to the predominant mannose receptor-mediated clearance for alteplase. A second possible clearance pathway for tenecteplase is a non-carbohydrate mediated mechanism via the low-density lipoprotein receptor-related protein (LRP) that is also a clearance pathway for alteplase (Camani et al., 1998).

Tenecteplase is indicated for the reduction of mortal-ity associated with AMI. The recommended total dose of tenecteplase should not exceed 50 mg and is based on patient weight according to the following weight-adjusted dosing table (Wang-Clow et al., 2001):

Treatment should be initiated as soon as possible after the onset of AMI symptoms. Tenecteplase is contraindicated in patients with known bleeding diathesis or active internal bleeding, history of cerebrovascular accident, recent intracranial or in-traspinal surgery or trauma, intracranial neoplasm, arteriovenous malformation, aneurysm, or severe uncontrolled hypertension due to an increased risk of bleeding.

The clinical pharmacokinetics of tenecteplase have been examined in two studies (TIMI 10A and TIMI 10B). TIMI 10A was a Phase I pilot safety study in patients with AMI. Pharmacokinetic data were obtained in 82 patients following intravenous bolus doses of 5 to 50 mg. Tenecteplase plasma concentra-tions decreased in a biphasic manner with an initial half-life of 11 to 20 minutes and a terminal half-life of 41 to 138 minutes. Mean plasma clearance of tenecteplase ranged from 125 to 216 mL/min and decreased with increasing dose (Modi et al., 1998). 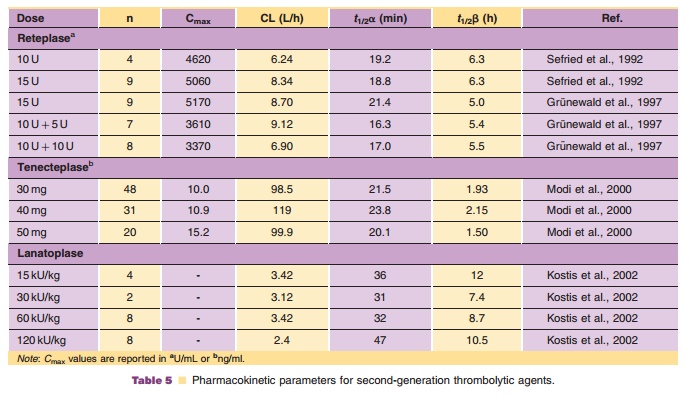 TIMI 10B was a dose-finding Phase II efficacy study comparing 30-, 40- and 50-mg doses of bolus tenecteplase to 100 mg alteplase administered via the accelerated infusion regimen. The pharmacokinetic data from TIMI 10B are summarized in Table 5. Tenecteplase plasma clearance was approximately 100 mL/min compared to 453 mL/min for accelerated alteplase. In contrast to TIMI 10A, no dose-dependent decrease in plasma clearance was noted in TIMI 10B, likely as a result of the narrower dose range examined. Additionally, the plasma clearances noted in TIMI 10B were slightly lower than those noted in TIMI 10A at comparable doses (Modi et al., 2000). The 30-, 40- and 50-mg doses in TIMI 10B produced TIMI grade 3 flow in 54.3%, 62.8%, and 65.8% of the patients, respectively. TIMI grade 3 flow was seen in 62.7% of patients in the accelerated alteplase group, not significantly different from that in the 40-mg tenecteplase group. An additional finding of this dose-finding efficacy trial was that dose-adjusted dosing is important in achieving optimal reperfusion (Cannon et al., 1998). In addition, tenecteplase resulted in a lower change from baseline in systemic coagulation factors compared with alteplase.

Tenecteplase is supplied as a sterile, white to off-white, lyophilized powder in a 50-mg vial under a partial vacuum. It should be stored at controlled room temperature not to exceed 30 C (86 F) or it should be stored refrigerated at 2 C to 8 C (36–46 F). Tenecteplase is intended for intravenous bolus injec-tion following reconstitution with sterile water for injection. Each vial nominally contains 52.5 mg tenec-teplase (comprising a 5% overfill), 0.55 g L-arginine, 0.17 g phosphoric acid, and 4.3 mg polysorbate 20. Biological potency of tenecteplase is determined by an in vitro clot lysis assay and is expressed in tenecte-plase-specific activity units. The specific activity of tenecteplase has been defined as 200 U/mg protein.