Time Zones of the World

People during the medieval period were using sundials and water clocks to observe the Sun’s meridian passing at noon.

Time Zones of the World

People during the medieval period were using sundials and water clocks to observe the Sun’s meridian passing at noon. In 17th century, the people started using pendulum clock which did not show accurate time while travelling in the sea. Later chronometer was invented in 1764. Chronometer measures time accurately and the mariners widely used this during the 19th century. But in many towns and cities clocks were set based on sunset and sunrise. The use of local solar time hindered the development of railways and telecommunications. A time zone is a region on the earth where uniform standard time should be maintained for transport, commercial and social purposes. For example, if different time zones were followed, the trains coming from different regions, sharing single track may meet with accidents.

The world time zone (Figure 2.17) was formed, relating longitude and the rotation of the earth. The Prime Meridian is the centre of time zone extending from 7½ºW and 7½ º E longitudes. The 24 hours time zone system had been developed so that all the time zones should be referred with respect to Greenwich Mean Time. Earth was divided into 24 time zones, each one zone for one hour of the day. It is because earth rotates 15º of longitude in one hour (360º divided by 24 hours). The time when solar noon occurs at the Prime Meridian is fixed as noon for all places between 7½º E and 7½º W. 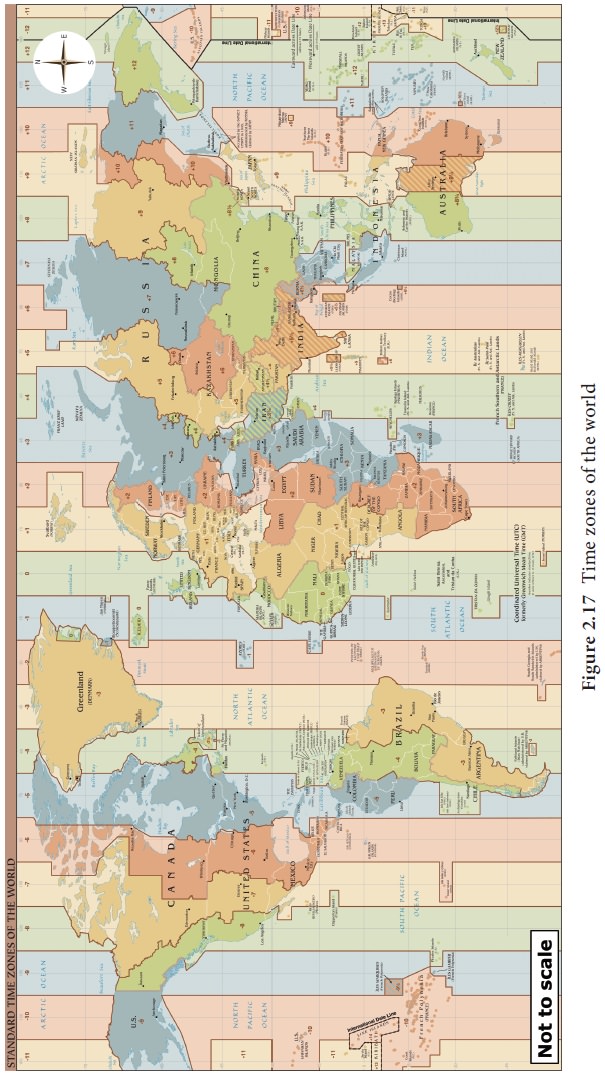 In the mid latitude countries of Europe, North America, Australia and South America, the day time are longer in summer than the night. In spite of employing daylight duration, the clocks are adjusted 1 hour forward in spring and 1 hour backward in autumn. This time is generally known as ‘the Daylight Saving Time’ (DST).

On its axis, the earth rotates 360 degrees every 24 hours. You can look at it as it takes one day to complete a full circle. Divided up into an hourly rate, the earth rotates 15 degrees every hour (360/24). This number plays an important role in determining time zones. You have already learned about the latitudes and longitudes and their importance in the lower classes.

An important factor in determining time zones is the lines of latitude and longitude, imaginary lines known as latitudes and longitudes dividing the earth. Latitude lines are drawn east - west and they measure the location in northern and southern hemisphere. The line starts at the equator and measure distance from 0 degrees to 90 degrees north and also 0 degrees to 90 degrees south. They also become shorter farther away from the equator. On the other hand, longitude lines are drawn north - south and they measure eastern and western hemisphere. They start at the Prime Meridian (or 0 degree) and measure from 0 degrees to 180 degrees east and 180 degrees west. Unlike lines of latitude, these lines are fairly equal in length. The origin of this spherical coordinate system is at 0 degree latitude and 0 degree longitude. This spot can be found in the Atlantic Ocean just south west of Africa. Also, the two lines connect at 180 degrees or at the International Date Line (Figure 2.18). This too helps to determining different time zones of the world. 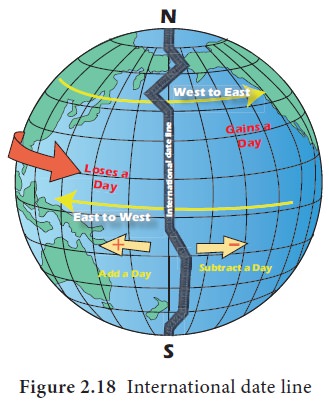 Together all of the above information can be used to calculate the difference of time between two locations.

Another calculation you may have to make is over the International Date Line. This line is strategically placed in the Pacific Ocean so that no two neighboring cities are one day apart in time. It can be difficult to calculate though the International Date Line when trying to determine the amount of time difference between locations on either side. This calculation is very similar to the situation with the Prime Meridian. We must start by finding the difference in longitude (or degrees) of the two places. We do this by adding the two numbers. Then, divide by the 15 degrees that occurs in one hour and this will give you the time difference between two locations through the International Date Line. And again, just add or subtract that difference from the time that we already know to come up with the new time in the new time zone.

Now we suppose imagine that we are going through the International Date Line. Pretend you are in Japan, which is 135 degrees east and you wanted to know what time it is in Hawaii, which is 150 West. Well, there is 45 (180–135) degrees difference between Japan and the IDL. Also there is 30 (180–150) degrees difference between the IDL and Hawaii. Therefore the difference in time is (45  30/15   5) 5 hours. Now the tricky part is that Japan and Hawaii are on different days. It is one day ahead on the left side of the IDL compared to the right side. If it is 3:00pm in Japan on Thursday that means it is 3:00 5 hours 8:00pm in Hawaii. However notice that when crossing the IDL we subtract a day going east. So, in Hawaii it is 8:00pm on Wednesday.

Now note that Latitudinal lines are imaginary horizontal lines over the Earth's globe. 0q longitudinal line is Equator. Earth completes one rotation on its axis in 24 hours and in the process turns a complete circle of 360q. This means Earth rotates 360q/24 15q in one hour. Every gain or loss of 1q longitude stands for 4 minutes.

d.        Adjust the time according to the direction of movement, (west or east). 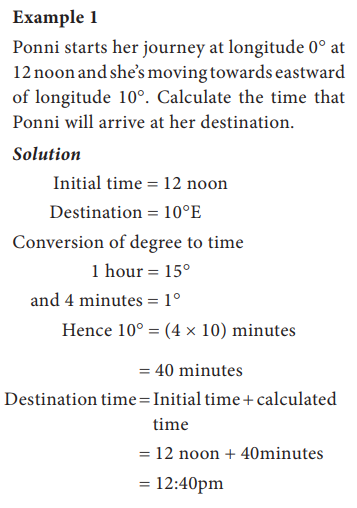 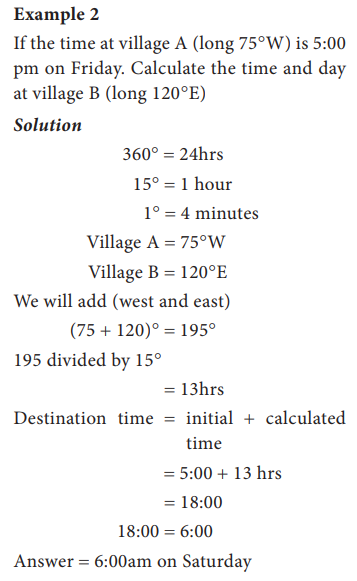 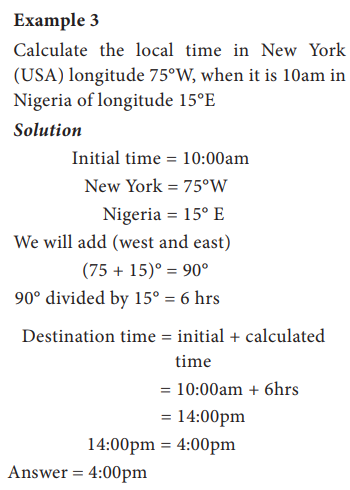