general, spring, summer, autumn and winter are the four seasons.

The seasons are caused due to the combined effect of the earth’s revolution and the tilt of its axis in the same direction throughout the year. In general, spring, summer, autumn and winter are the four seasons (Figure 2.12). The latitude at which the sun appears directly overhead changes as the earth orbits the sun. The sun appears to follow a yearly pattern of northward and southward motion in the sky, known as the ‘apparent movement of the sun’. It gives an impression that the sun is continuously swinging north and south of the equator. Actually it is the earth that is moving around the sun on its tilted axis. It varies when observed on a daily and monthly basis, at different times of the year. On 21 March and 23 September the sun rises precisely in the east and sets exactly in the west. 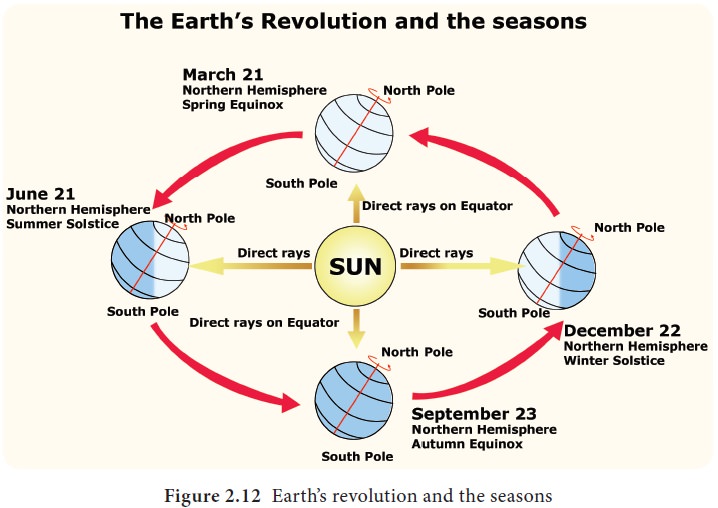 You already knew that the sunrays are vertical at noon. The vertical rays fall on a small area, giving more heat.

Position of the earth on 21 March

Position of the earth on 23 September. 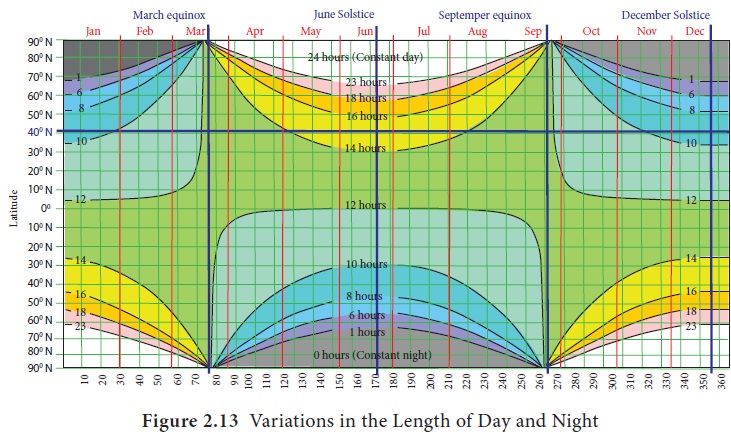 Position of the earth on 21 June

Position of the earth on 22 December

Let us understand the effect of the revolution of the earth on the length of the days and the nights. The duration of the daylight varies with latitude and seasons.

An eclipse is a complete or partial obscuration of light from a celestial body and it passes through the shadow of another celestial body. The eclipses are of two types. They are:

It occurs on New Moon days, when the moon is between the Sun and the Earth. Thus it obscures a part of the Sun viewed from the Earth, but only from a small area of the world. It lasts only for a few minutes. A partial solar eclipse (Figure 2.14) happens when the moon partially covers the disc of the sun. An annular solar eclipse occurs when the moon passes centrally across the solar disc. 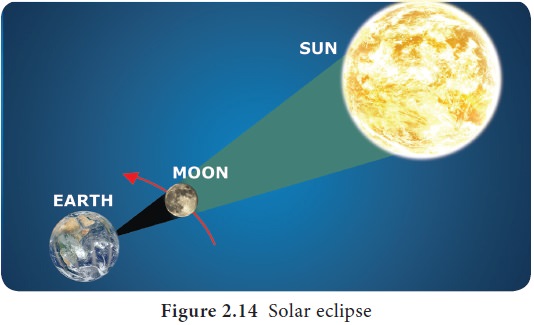 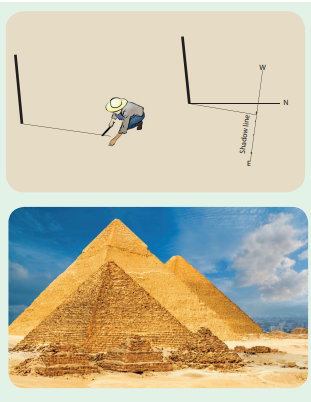 During a total solar eclipse, the moon’s shadow is short enough to cover the whole sun. The outer regions still glow and look bright as a ring. Such a phenomenon is called Diamond Ring. 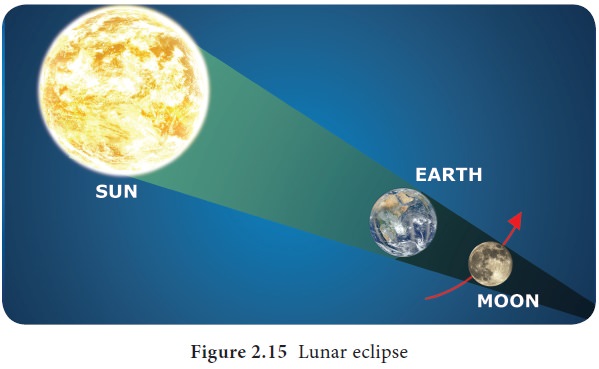 Phases of the Moon

The changing angles between the earth, the sun and the moon determine the phases of the moon. Phases of the moon (Figure 2.16) start from the ‘New Moon’ every month. Then, only a part of the Moon is seen bright called ‘Crescent’, which develops into the ‘first quarter’. With the increasing brightness it turns into three quarters known as ‘Gibbous’ and then it becomes a ‘Full Moon’. These stages are the waxing moon. After the full moon, the moon starts waning or receding through the stages of Gibbous, last quarter, crescent, and finally becomes invisible as dark New Moon. 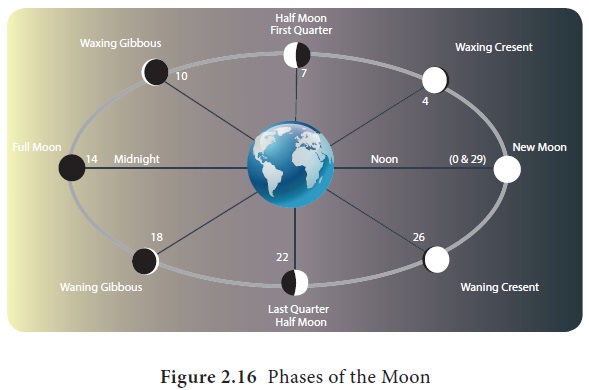 The varying lengths of daylight in different latitudes

Effects of the spherical shape of the earth

Variation in the amount of solar radiation received:

If the earth were a flat surface, oriented at right angle to the sun, all the places on the earth would have received the same amount of radiation. But the earth is spherical/ geoid. Hence the sunrays do not heat the higher latitudes of the earth as much as the tropics. On any given day only the places located at particular latitude receive vertical rays from the sun. As we move north or south of this location, the sun’s rays strike at decreasing angles. The yearly fluctuations in the angle of the sun’s rays and the length of the days change with the continual change of the earth’s position in its orbit around the sun at an inclination of 66½ to the orbital plane.

Difference in the angle of the sun’s rays striking different parts of the earth.

Away from the equator, the sun’s rays strike the earth’s surface at particular angle. The slanting rays are spread over a large area and do not heat with the same intensity as the direct rays. As we go pole wards, the rays spread over the regions beyond the Arctic and the Antarctic circles in an extremely slanting manner. This is how we get the various temperature zones.

As a result, the world has been divided into three distinct heat zones or temperature zones. They are the Torrid zone, Temperate zone and Frigid zone. You will learn more about it under the unit atmosphere.