The Sun is at the centre of our solar system. It is a yellow dwarf star, with a hot ball of glowing gases. Its gravity holds the solar system together and it keeps everything from the biggest planets to the smallest particles of debris in its orbit. Electric currents in the Sun generate a magnetic field that is carried out through the solar system by the solar wind.

By mass, the Sun is made up of about 70.6% hydrogen and 27.4% helium. The Sun's enormous mass is held together by gravitational attraction, producing immense pressure and temperature at its core. There are three main layers in the Sun's interior: the core, the radiative zone, and the convective zone (Figure 2.6). The core is at the centre. It is the hottest region, where the nuclear fusion reaction to give the sun power. Moving outward next come the radiative (or radiation) zone. Its name is derived from the way energy is carried outward through this layer, carried by photons as thermal radiation. The third and final region of the solar interior is named the convective (or convection) zone. It is also named after the dominant mode of energy flow in this layer. The boundary between the Sun's interior and the solar atmosphere is called the photosphere. It is what we see as the visible ‘surface’ of the Sun. 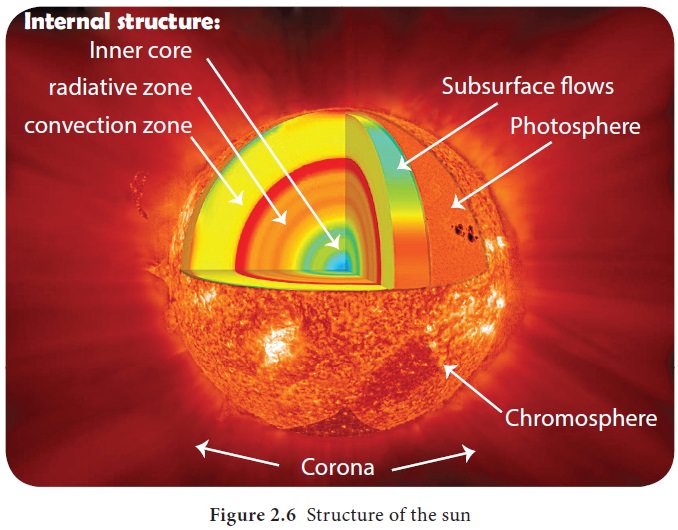 Did you know that the Sun has an atmosphere? The lower region of the solar atmosphere is called the chromosphere. Its name is derived from the Greek word chroma (meaning colour), for it appears bright red when viewed during a solar eclipse. A thin transition region, where temperature rises sharply, separates the chromospheres from the vast corona above. The uppermost portion of the Sun's atmosphere is called the corona, and is surprisingly much hotter than the Sun's surface (photosphere) The upper corona gradually turns into the solar wind. Solar wind is a flow of plasma that moves outward through our solar system into interstellar space.

Therefore, the Sun has six regions: the core, the radioactive zone, and the convective zone in the interior; the photosphere; the chromospheres; and the corona. The temperature of the sun’s surface is about 5,500 to 6,000 degrees Celsius.

At the core, the temperature is about 15 million degrees Celsius, which is sufficient to sustain thermonuclear fusion. This is a process in which atoms combine to form larger atoms and in this process, released, staggering amounts of energy. Specifically, in the Sun’s core, hydrogen atoms fuse to make helium.

Venus is hotter than Mercury because Venus has an atmosphere which is thicker and made almost entirely of carbon dioxide.