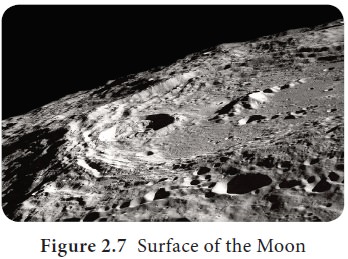 Hence, the observers on the earth could see only one side of the moon.

The moon is the fifth largest natural satellite in the solar system. The moon was likely to be formed after a Mars-sized body collided with Earth. There are many craters, high and steep mountains of different sizes which cast shadows on the Moon’s surface. The light which is reflected by the Moon will reach the Earth in just one and a quarter seconds.

Apollo 11 was the first manned mission to land on the Moon sent  by  NASA.  Two American Astronauts Neil Armstrong and Edwin Aldrin set foot on the moon’s surface on the waterless Sea of Tranquility on 20th July, 1969. They stayed there for 21 hours 38 minutes and 21 seconds on the moon. Michael Collins piloted Apollo 11.