The thyroid (thı̄′royd; shield-shaped) gland is made up of two lobes connected by a narrow band called the isthmus (is′mŭs; a constriction).

The thyroid (thı̄′royd; shield-shaped) gland is made up of two lobes connected by a narrow band called the isthmus (is′mŭs; a constriction). The lobes are located on each side of the trachea, just inferior to the larynx (figure 10.15a,b). The thyroid gland is one of the largest endocrine glands. It appears more red than the surrounding tissues because it is highly vascular. It is surrounded by a connective tissue capsule. The main function of the thyroid gland is to secrete thyroid hormones, which bind to nuclearreceptors in cells and regulate the rate of metabolism in the body (table 10.2). Thyroid hormones are synthesized and stored within the gland in numerous thyroid follicles, which are small spheres with walls composed of simple cuboidal epithelium (figure 10.15c,d). Each thyroid follicle is filled with the protein thyroglobulin (thı̄-rō-glob′ū-lin), to which thyroid hormones are attached. Between the follicles is a network of loose connective tissue that contains capillaries and scattered parafollicular cells, or C cells, which secrete the hormone calcitonin. 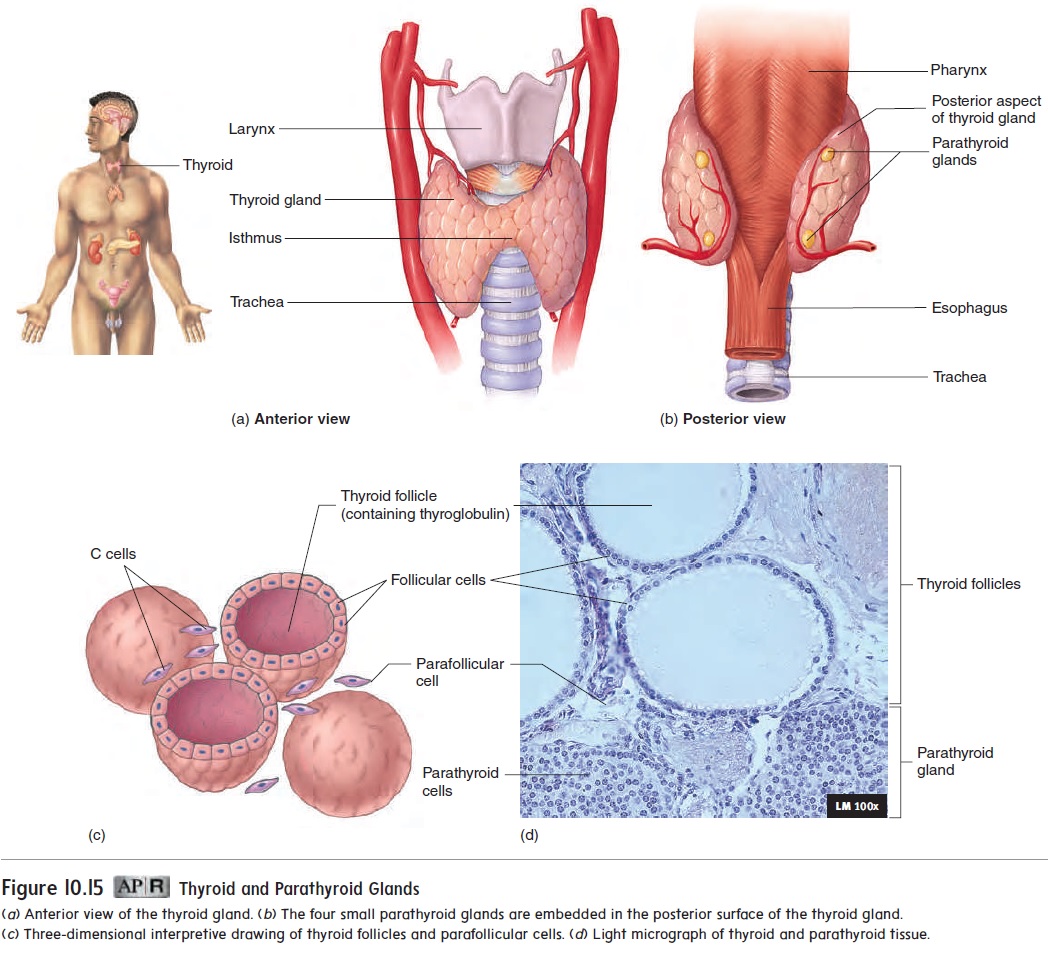 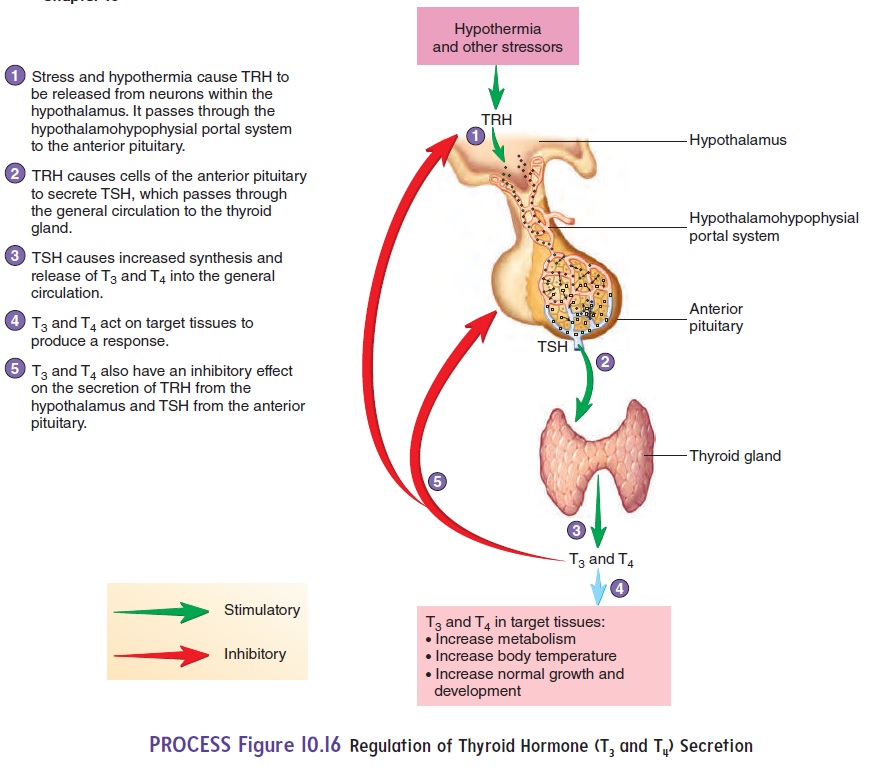 Without a normal rate of thyroid hormone secretion, growth and development cannot proceed normally. A lack of thyroid hor-mones is called hypothyroidism (hı̄′pō-thı̄′royd-izm). In infants, hypothyroidism can result in cretinism (krē′tin-izm), character-ized by mental retardation, short stature, and abnormally formed skeletal structures. In adults, the lack of thyroid hormones results in a decreased metabolic rate, sluggishness, a reduced ability to perform routine tasks, and myxedema (mik-se-dē′mă), which is the accumulation of fluid and other molecules in the subcutane-ous tissue. An elevated rate of thyroid hormone secretion, known as hyperthyroidism (hı̄-per-thı̄′royd-izm), causes an increased metabolic rate, extreme nervousness, and chronic fatigue. Gravesdisease is a type of hyperthyroidism that results when the immunesystem produces abnormal proteins that are similar in structure and function to TSH. Graves disease is often accompanied by bulging of the eyes, a condition called exophthalmia (ek-sof-thal′mē-ă) (see Systems Pathology, “Graves Disease”).

A lack of iodine in the diet results in reduced T3 and T4 synthesis. A deficiency of iodine is not as common in the United States as it once was. Table salt with iodine added to it (iodized salt) is available in grocery stores, and vegetables grown in soil rich in iodine can be shipped to most places.

In addition to secreting thyroid hormones, the parafollicular cells of the thyroid gland secrete a hormone called calcitonin (kal-si-tō′ nin) (see figure 10.15c). Calcitonin is secreted if the blood concentration of Ca2+ becomes too high, and it causes Ca2+ levels to decrease to their normal range (figure 10.17). Calcitonin binds to membrane-bound receptors of osteoclasts and reduces the rate of Ca2+ resaborption (breakdown) from bone by inhibiting the osteoclasts. Calcitonin may prevent blood Ca2+ levels from becoming overly elevated following a meal that contains a high concentration of Ca2+. 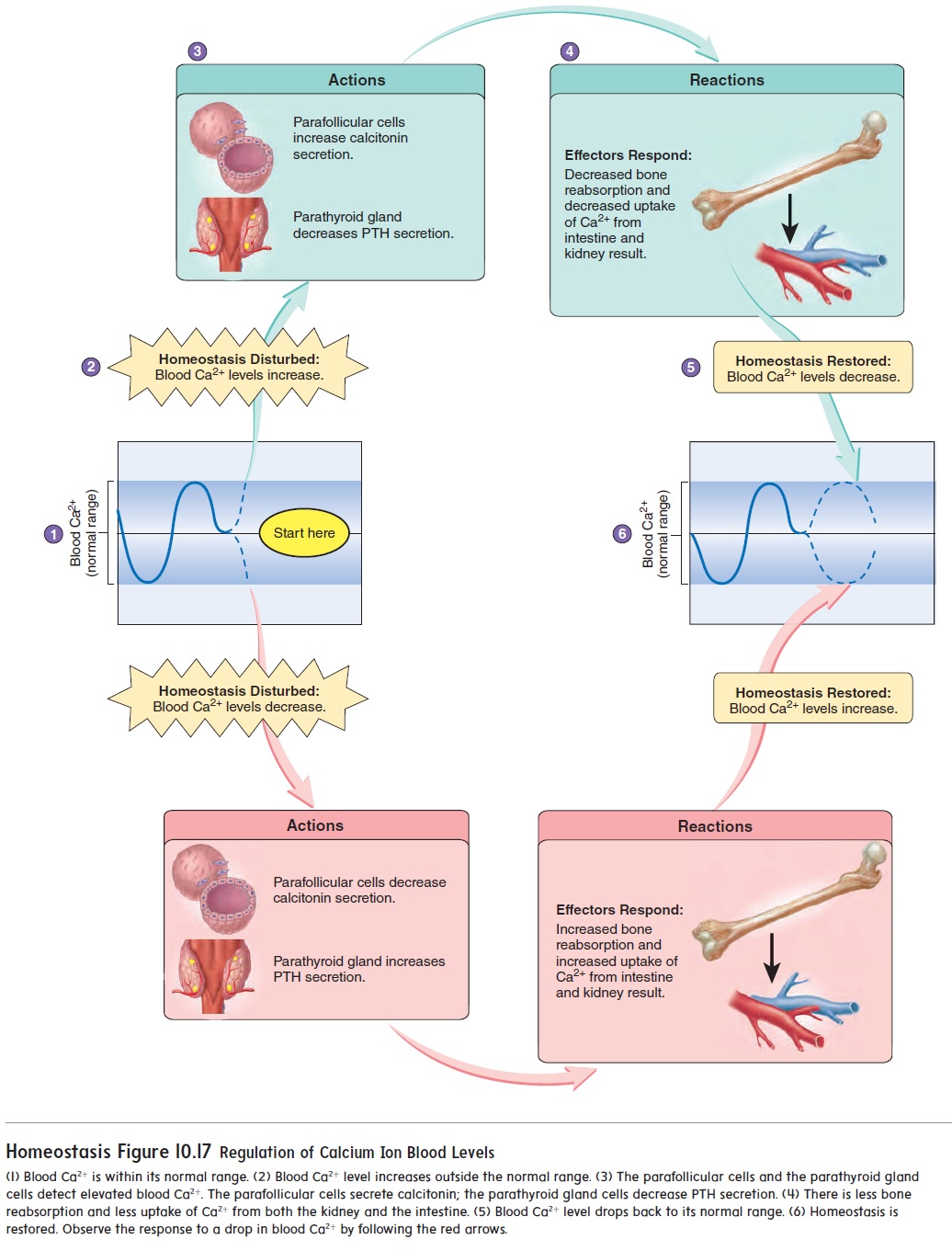