Pituitary and hypothalamus - Endocrine Glands and Their Hormones

The pituitary (pi-too′ i-tār-rē; pituita, phlegm or thick mucous secretion) gland is also called the hypophysis (hı̄-pof′ i-sis; hypo, under + physis, growth). It is a small gland about the size of a pea (figure 10.12, top).

The pituitary (pi-too′ i-tār-rē; pituita, phlegm or thick mucous secretion) gland is also called the hypophysis (hı̄-pof′ i-sis; hypo, under + physis, growth). It is a small gland about the size of a pea (figure 10.12,top). It rests in a depression of the sphenoid bone inferior to the hypothalamus of the brain. The hypothalamus (hı̄′ pō-thal′ ă-mŭs; hypo, under + thalamos) is an important auto-nomic nervous system and endocrine control center of the brain located inferior to the thalamus. The pituitary gland lies posterior to the optic chiasm and is connected to the hypothalamus by a stalk called the infundibulum (in-fŭn-dib′ŭ-lŭm; a funnel). The pituitary gland is divided into two parts: The anterior pituitary is made up of epithelial cells derived from the embryonic oral cavity; the posterior pituitary is an extension of the brain and is composed of nerve cells. The hormones secreted from each lobe of the pituitary gland are listed in table 10.2. 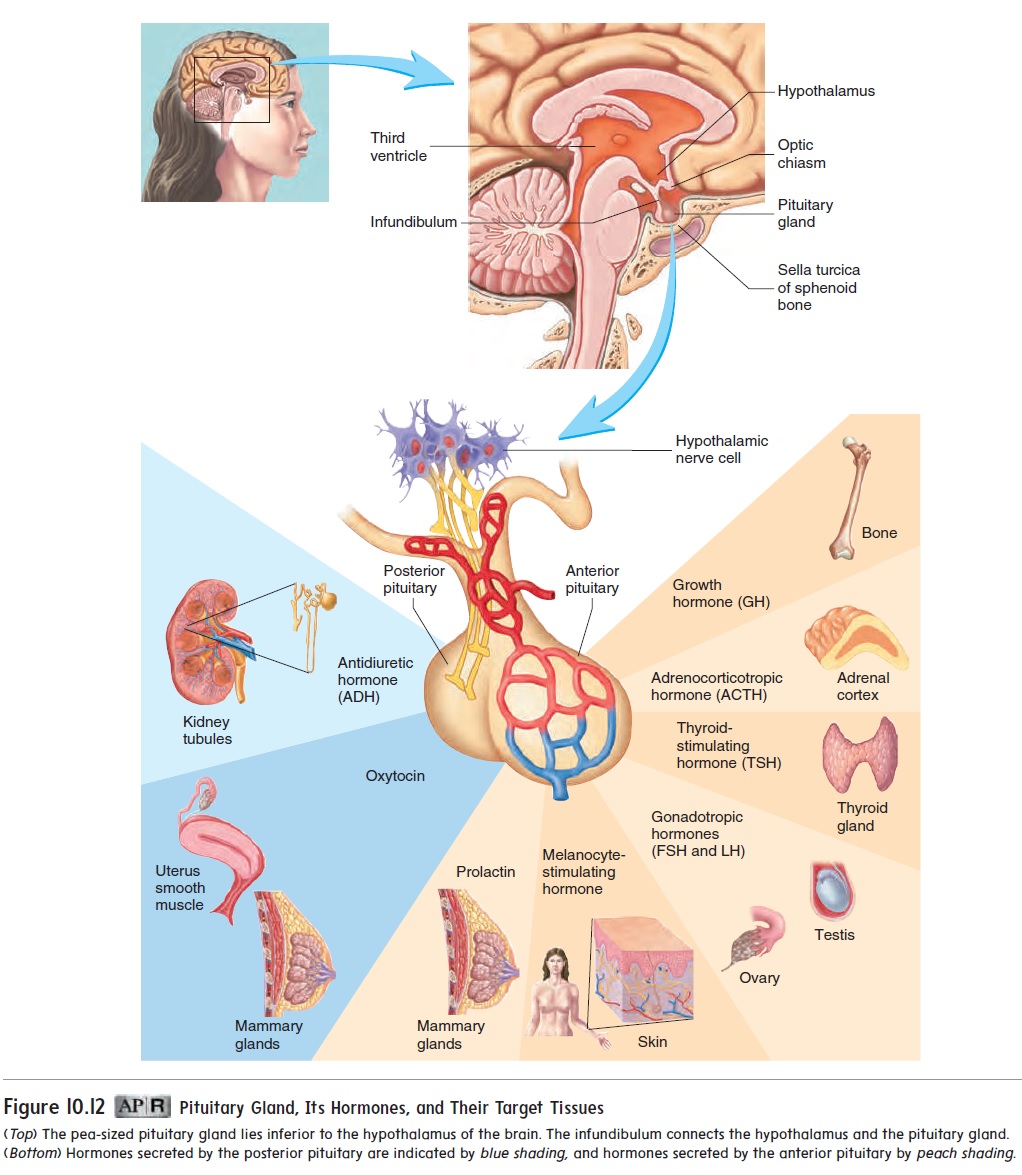 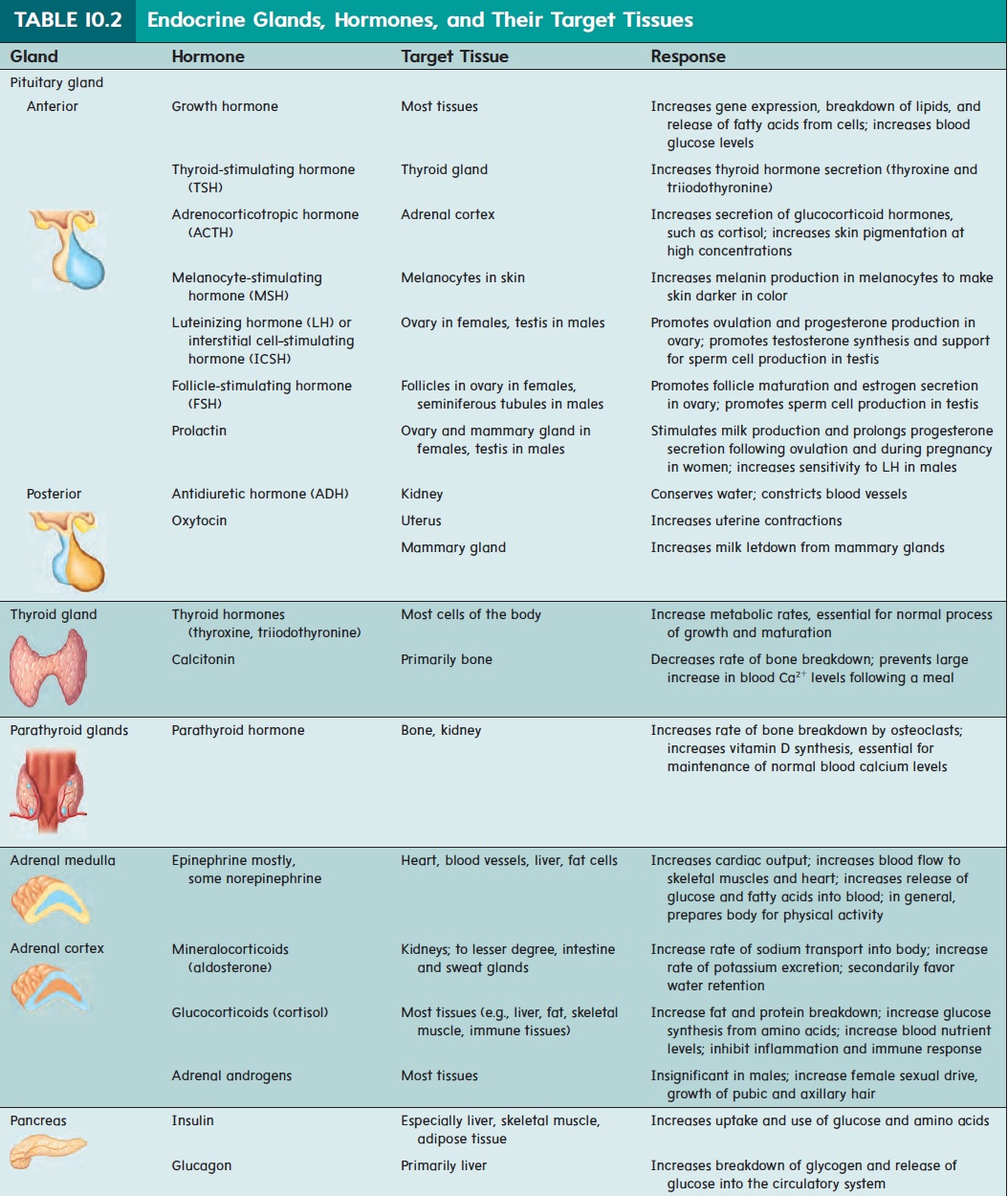 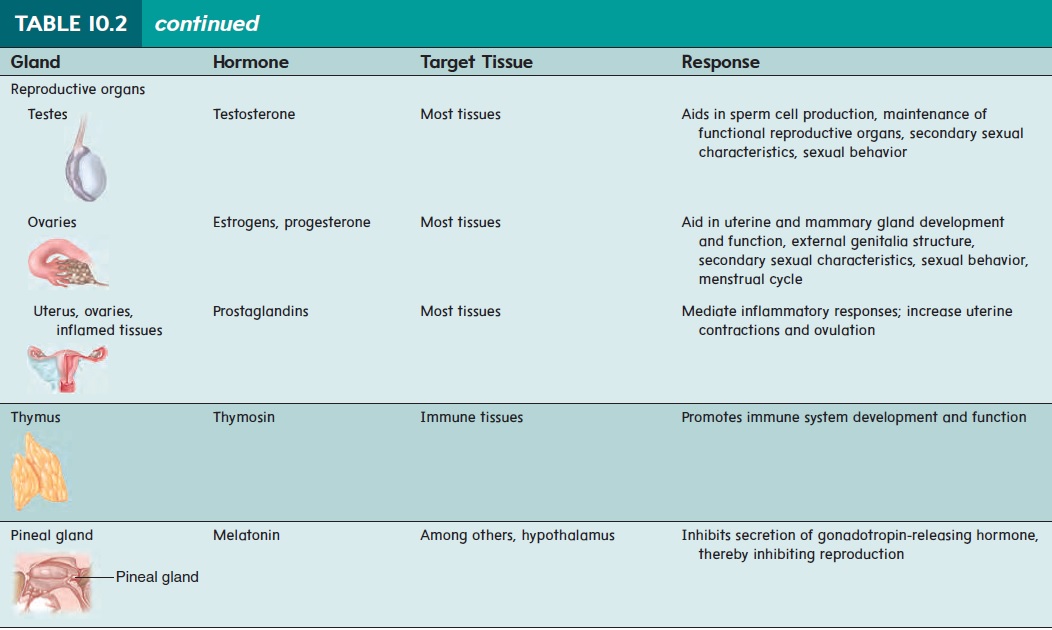 Hormonal Control of the Anterior Pituitary 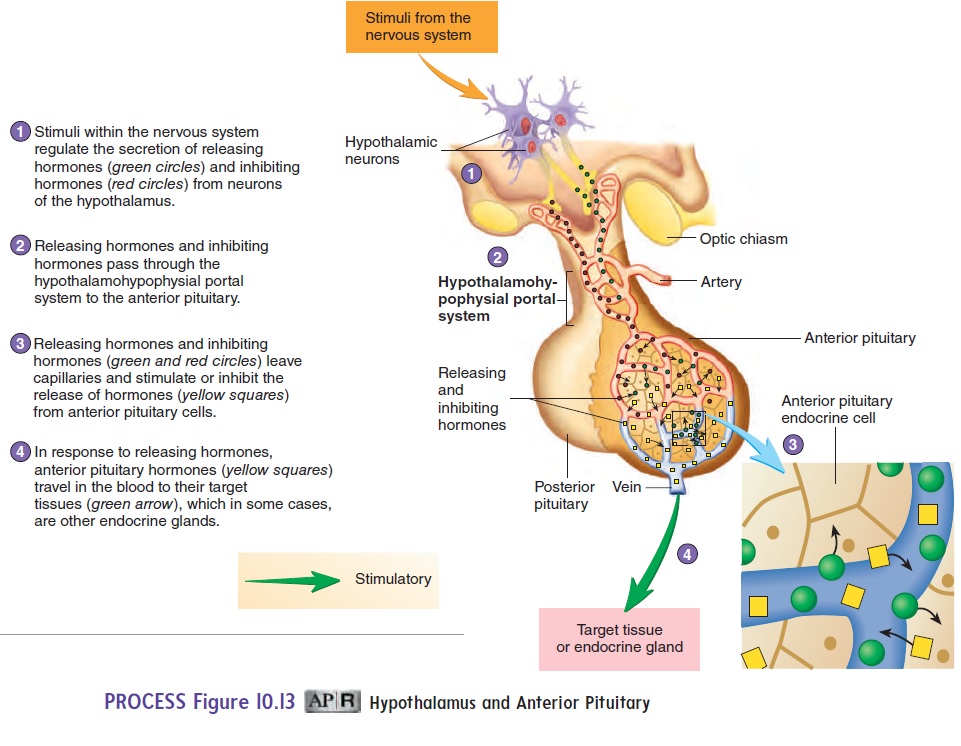 Direct Innervation of the Posterior Pituitary 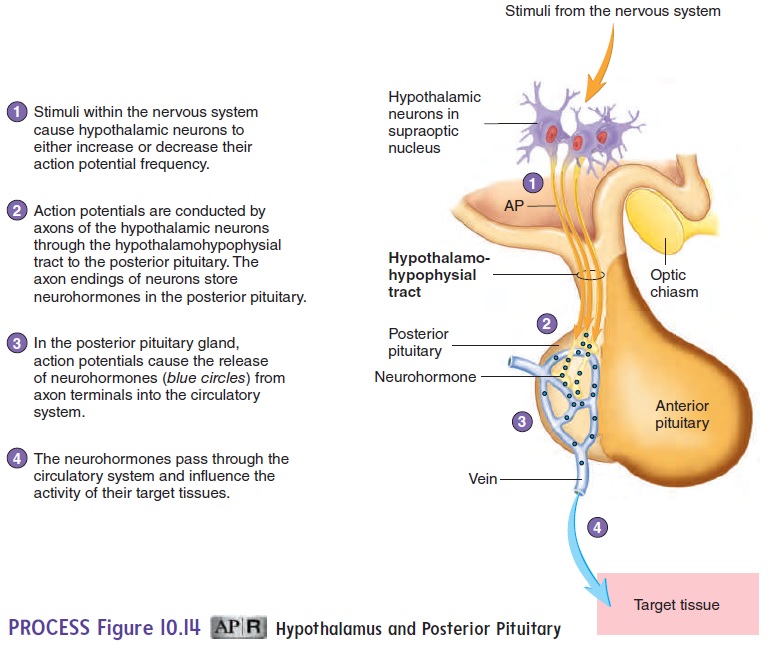 When these nerve cells are stimulated, action potentials from the hypothalamus travel along the axons to the posterior pituitary and cause the release of hormones from the axon endings.

Hormones of the Anterior Pituitary

Growth hormone (GH) stimulates the growth of bones, muscles,and other organs by increasing gene expression. It also resists protein breakdown during periods of food deprivation and favors lipid breakdown. Too little growth hormone secretion can result from abnormal development of the pituitary gland. A young per-son suffering from a deficiency of growth hormone remains small, although normally proportioned, and is called a pituitary dwarf (dw̄o rf). This condition can be treated by administering growth hor-mone. Because GH is a protein, it is difficult to produce artificially using conventional techniques. However, human genes for GH have been successfully introduced into bacteria using genetic engineering techniques. The gene in the bacteria causes GH synthesis, and the GH can be extracted from the medium in which the bacteria are grown. Thus, modern genetic engineering has provided a source of human GH for people who produce inadequate quantities.

Part of the effect of growth hormone is influenced by a group of protein hormones called insulin-like growth factors (IGFs), or somatomedins (sō ′ mă -tō -mē ′ dinz). Growth hormone increases IGF secretion from tissues such as the liver, and the IGF molecules bind to receptors on the cells of tissues such as bone and cartilage, where they stimulate growth. The IGFs are similar in structure to insulin and can bind, to some degree, to insulin receptors. Also, insulin, at high concentrations, can bind to IGF receptors.

Adrenocorticotropic (a-drē′nō-kōr′ti-kō-trō′pik) hormone (ACTH) binds to membrane-bound receptors on cells in the cortex ofthe adrenal glands. ACTH increases the secretion of a hormone fromthe adrenal cortex called cortisol (k̄o r′ ti-sol), also called hydrocorti-sone. ACTH is required to keep the adrenal cortex from degenerating. ACTH molecules also bind to melanocytes in the skin and increase skin pigmentation . One symptom of too much ACTH secretion is darkening of the skin. The rate of ACTH secre-tion is increased by a releasing hormone from the hypothalamus.

Gonadotropins (gō′nad-ō-trō′pinz) are hormones that bindto membrane-bound receptors on the cells of the gonads (ovaries and testes). They regulate the growth, development, and functions of the gonads. In females, luteinizing (loo′ t̄e -̆ı -n̄ı z-ing) hormone(LH) causes the ovulation of oocytes and the secretion of the sexhormones estrogen and progesterone from the ovaries. In males, LH stimulates interstitial cells of the testes to secrete the sex hormone testosterone and thus is sometimes referred to as interstitial (in-ter-stish′ăl) cell–stimulating hormone (ICSH). Follicle-stimulatinghormone (FSH) stimulates the development of follicles in the ova-ries and sperm cells in the testes. Without LH and FSH, the ovaries and testes decrease in size, no longer produce oocytes or sperm cells, and no longer secrete hormones. A single releasing hormone from the hypothalamus increases the secretion of both LH and FSH.

Prolactin (prō-lak′tin;pro,precursor+lact,milk) binds tomembrane-bound receptors in cells of the breast, where it helps pro-mote development of the breast during pregnancy and stimulates the production of milk following pregnancy. The regulation of prolactin secretion is complex and may involve several substances­ released from the hypothalamus. There are two main regulatory hormones; one increases prolactin secretion and one decreases it.

Melanocyte-stimulating (mel′ă-nō-sı̄t) hormone (MSH) binds to membrane-bound receptors on melanocytes and causes them to synthesize melanin. The structure of MSH is similar to that of ACTH, and oversecretion of either hormone causes the skin to darken. Regulation of MSH is not well understood, but there appear to be two regulatory hormones from the hypothalamus— one that increases MSH secretion and one that decreases it.

Hormones of the Posterior Pituitary

A lack of ADH secretion causes diabetes insipidus, which is the production of a large amount of dilute urine. The consequences of diabetes insipidus are not obvious until the condition becomes severe, producing many liters of urine each day. The large urine volume causes an increase in the concentration of the body fluids and the loss of important electrolytes, such as Ca2+, Na+, and K+. The lack of ADH secretion may be familiar to some who have ever had alcohol to drink. The diuretic actions of alcohol are due to its inhibition of ADH secretion.

Oxytocin (ok′sı̆-tō′sin; swift birth) binds to membrane-boundreceptors, and causes contraction of the smooth muscle cells of the uterus as well as milk letdown from the breasts in lactating women. Commercial preparations of oxytocin, known as Pitocin, are given under certain conditions to assist in childbirth and to constrict uterine blood vessels following childbirth.