Three types of stimuli regulate hormone release: humoral, neural, and hormonal. No matter what stimulus releases the hormone, however, the blood level of most hormones fluctuates within a homeostatic range through negative-feedback mechanisms . In a few instances, positive-feedback systems also regulate blood hormone levels.

Blood-borne chemicals can directly stimulate the release of some hormones. These chemicals are referred to as humoral stimuli because they circulate in the blood, and the word humoral refers to body fluids, including blood. These hormones are sensitive to the blood levels of a particular substance, such as glucose, calcium, or sodium. Figure 10.2 illustrates that when the blood level of a par-ticular chemical changes (calcium), the hormone (PTH) is released in response to the chemical’s concentration. As another example, if a runner has just finished a long race during hot weather, he may not produce urine for up to 12 hours after the race because his elevated concentration of blood solutes stimulates the release of a water-conservation hormone called antidiuretic hormone (ADH). Similarly, elevated blood glucose levels directly stimulate insulin secretion by the pancreas, and elevated blood potassium levels directly stimulate aldosterone release by the adrenal cortex. 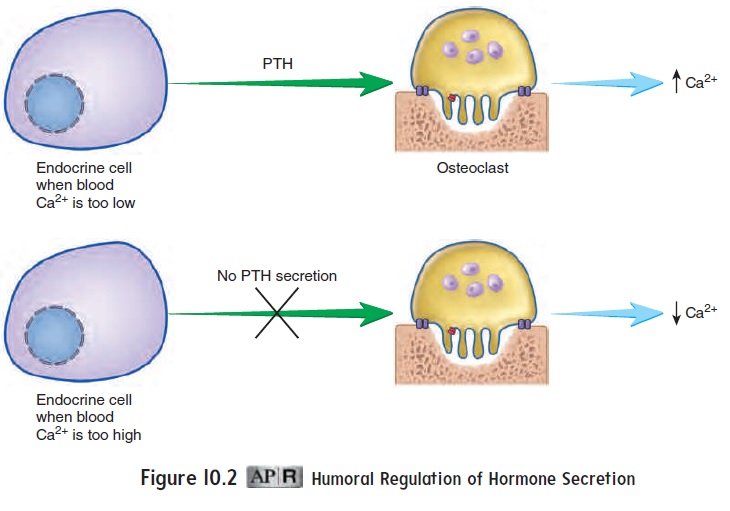 The second type of hormone regulation involves neural stimuli of endocrine glands. Following action potentials, neurons release a neurotransmitter into the synapse with the cells that produce the hormone. 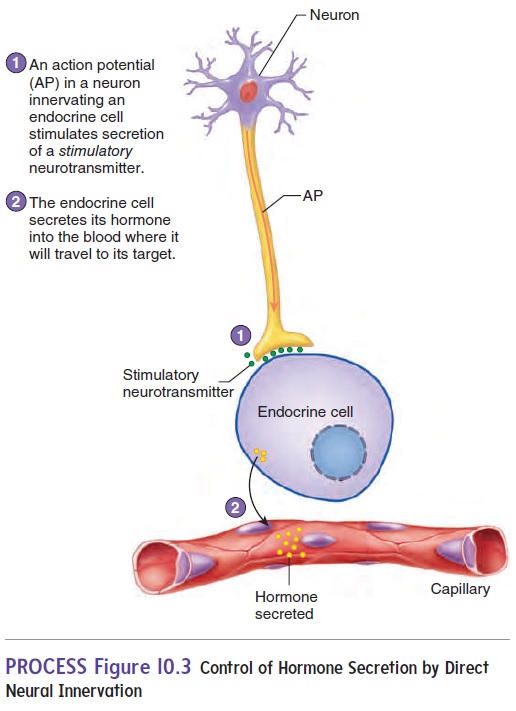 In some cases, the neurotransmitter stimulates the cells to increase hormone secretion. Figure 10.3 illustrates the neural control of hormone secretion from cells of an endocrine gland. For example, in response to stimuli, such as stress or exercise, the sympathetic divi-sion of the autonomic nervous system  stimulates the adrenal gland to secrete epinephrine and norepinephrine, which help the body respond to the stimulus. Responses include an elevated heart rate and increased blood flow through the exercising muscles. When the stimulus is no longer present, the neural stimulation declines and the secretion of epinephrine and norepinephrine decreases. 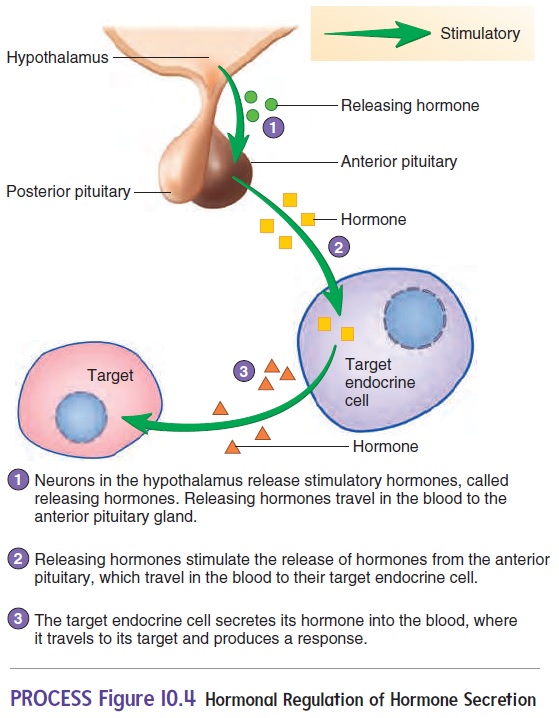 Neurons inhibit targets just as often as they stimulate targets. If the neurotransmitter is inhibitory, the target endocrine gland does not secrete its hormone.

Some hormones prevent the secretion of other hormones, which is a common mode of hormone regulation. For example, hormones from the hypothalamus that prevent the secretion of tropic hor-mones from the pituitary gland are called inhibiting hormones. Thyroid hormones can control their own blood levels by inhibiting their pituitary tropic hormone. Without the original stimulus, less thyroid hormone is released.

Regulation Of Hormone Levels In The Blood

1. Negative feedback. Most hormones are regulated by a  negative-feedback mechanism, whereby the hormone’s  secretion is inhibited by the hormone itself once blood levels  have reached a certain point and there is adequate hormone  to activate the target cell. The hormone may inhibit the action of other, stimulatory hormones to prevent the secretion ofthe hormone in question. Thus, it is a self-limiting system(figure 10.5a). For example, thyroid hormones inhibit thesecretion of their releasing hormone from the hypothalamusand their tropic hormone from the anterior pituitary. 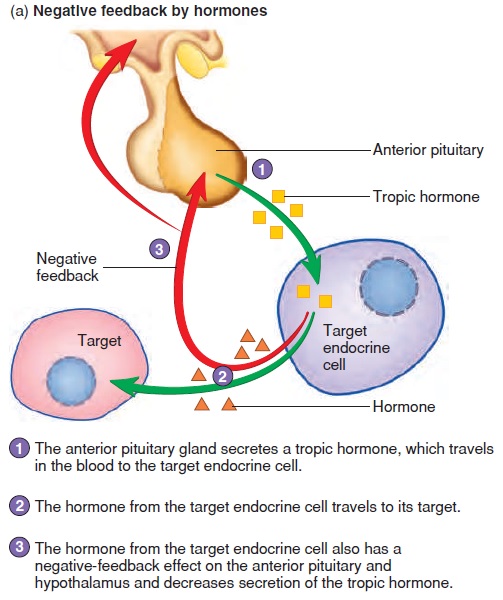 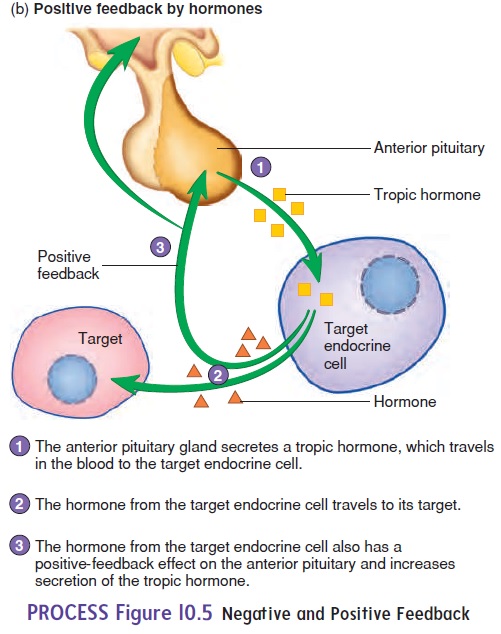 2. Positive feedback. Some hormones, when stimulated bya tropic hormone, promote the synthesis and secretionof the tropic hormone in addition to stimulating theirtarget cell. In turn, this stimulates further secretion of theoriginal hormone. Thus, it is a self-propagating system(figure 10.5b). For example, prolonged estrogen stimulationpromotes a release of the anterior pituitary hormoneresponsible for stimulating ovulation.