Hormone Receptors and Mechanisms of Action

A. Describe The General Properties Of A Receptor. B. Explain The Mechanisms Of Action For The Two Types Of Receptor Classes. C. Define Amplification, And Explain How, Despite Small Hormone Concentrations, Water-Soluble Hormones Can Cause Rapid Responses.

HORMONE RECEPTORS AND MECHANISMS OF ACTION

Hormones exert their actions by binding to proteins called receptors. A hormone can stimulate only the cells that have the receptor for that hormone. The portion of each receptor molecule where a hor-mone binds is called a receptor site, and the shape and chemical characteristics of each receptor site allow only a specific type of hormone to bind to it. The tendency for each type of hormone to bind to one type of receptor, and not to others, is called specificity (figure 10.6). For example, insulin binds to insulin receptors, but not to receptors for thyroid hormones. However, some hormones, such as epinephrine, can bind to a “family” of receptors that are structur-ally similar. Because hormone receptors have a high affinity for the hormones that bind to them, only a small concentration of a given hormone is needed to activate a significant number of its receptors. 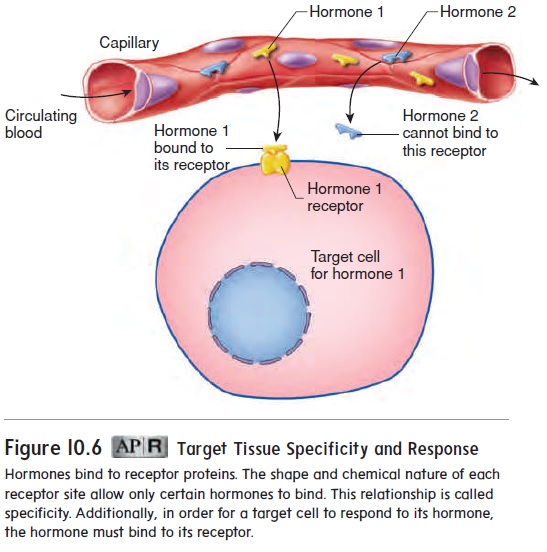 Lipid-soluble and water-soluble hormones bind to their own classes of receptors. Figure 10.7 provides an overview of receptor type and mechanism of action. 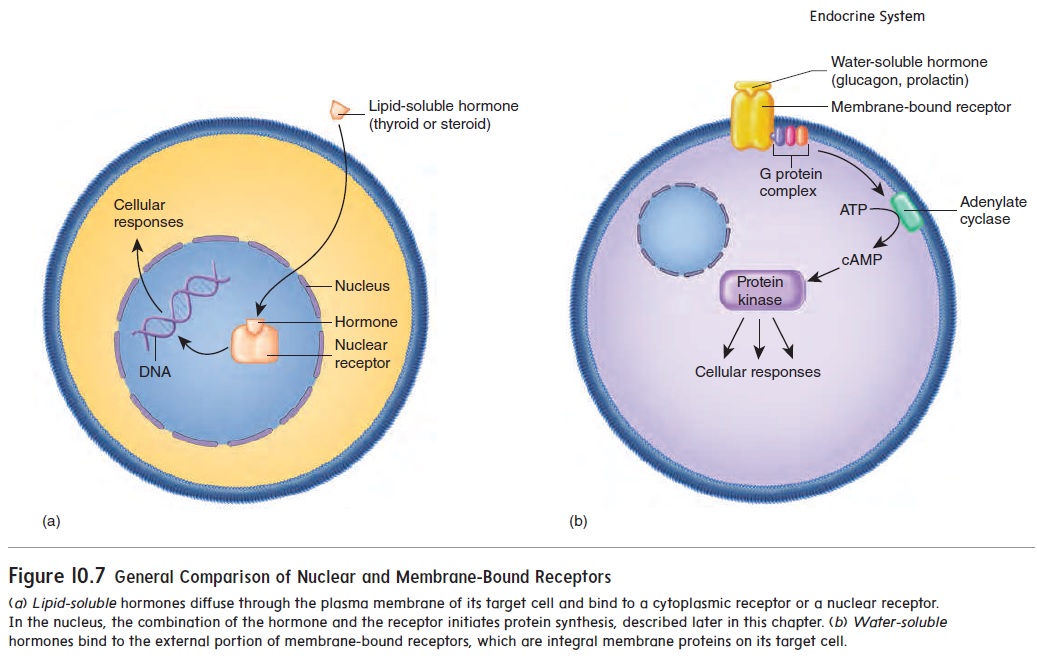 In addition to modulating gene transcription, it is now recognized that lipid-soluble hormones have rapid effects (less than 1 minute) on target cells. These effects are most likely mediated through membrane-bound receptors (see next section).

After lipid-soluble hormones diffuse across the plasma membrane and bind to their receptors, the hormone-receptor complex binds to DNA to produce a response (figure 10.8). 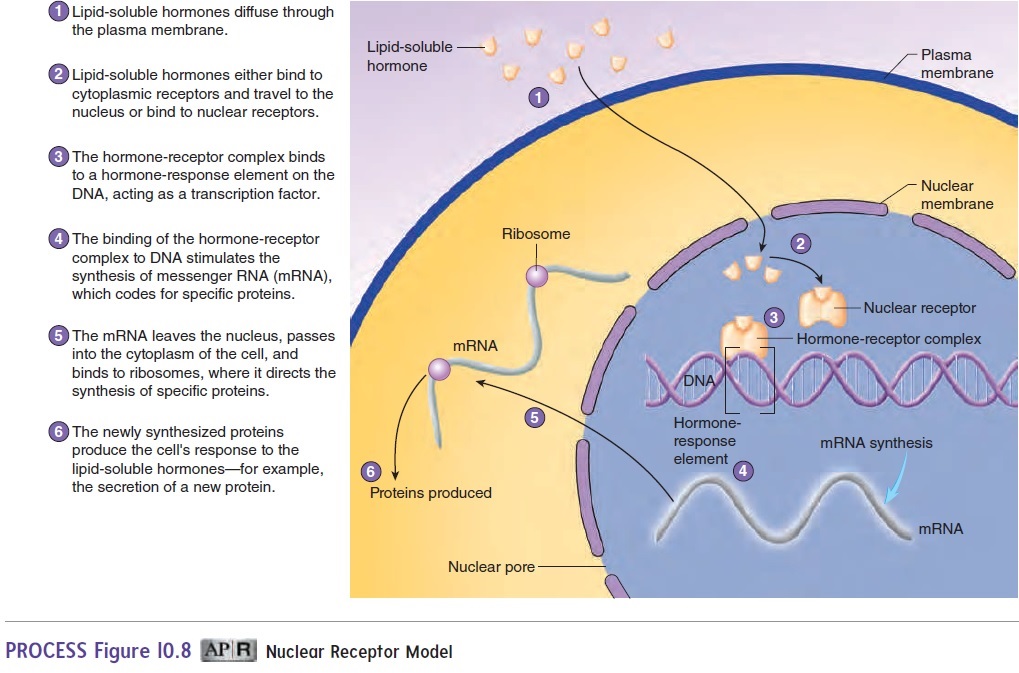 The receptors that bind to DNA have fingerlike projections that recognize and bind to specific nucleotide sequences in the DNA called hormone-­response elements. The combination of the hormone and itsreceptor forms a transcription factor because, when the hormone-receptor complex binds to the hormone-response element, it regulates the transcription of specific messenger ribonucleic acid (mRNA) molecules. Newly formed mRNA molecules move to the cytoplasm to be translated into specific proteins at the ribosomes. The newly synthesized proteins produce the cell’s response to the hormone. For example, testosterone stimulates the synthesis of proteins that are responsible for male secondary sex characteristics, such as the formation of muscle mass and the typical male body structure. The steroid hormone aldosterone affects its target cells in the kidneys by stimulating the synthesis of proteins that increase the rate of Na+ and K+ transport. The result is a reduction in the amount of Na+ and an increase in the amount of K+ lost in the urine. Other hormones that produce responses through nuclear receptor mecha-nisms include thyroid hormones and vitamin D.

Target cells that synthesize new protein molecules in response to hormonal stimuli normally have a latent period of several hours between the time the hormones bind to their receptors and the time responses are observed. During this latent period, mRNA and new proteins are synthesized. Hormone-receptor complexes are eventually degraded within the cell, limiting the length of time hormones influence the cells’ activities, and the cells slowly return to their previous functional states.

Many membrane-bound receptors produce responses through the action of G proteins. G proteins consist of three subunits; from largest to smallest, they are called alpha (α), beta (β), and gamma (γ) (figure 10.9, step 1). The G proteins are so named because one of the subunits binds to guanine nucleotides. In the inactive state, a guanine diphosphate (GDP) molecule is bound to the α subunit of each G protein. In the active state, guanine triphosphate (GTP) is bound to the α subunit. 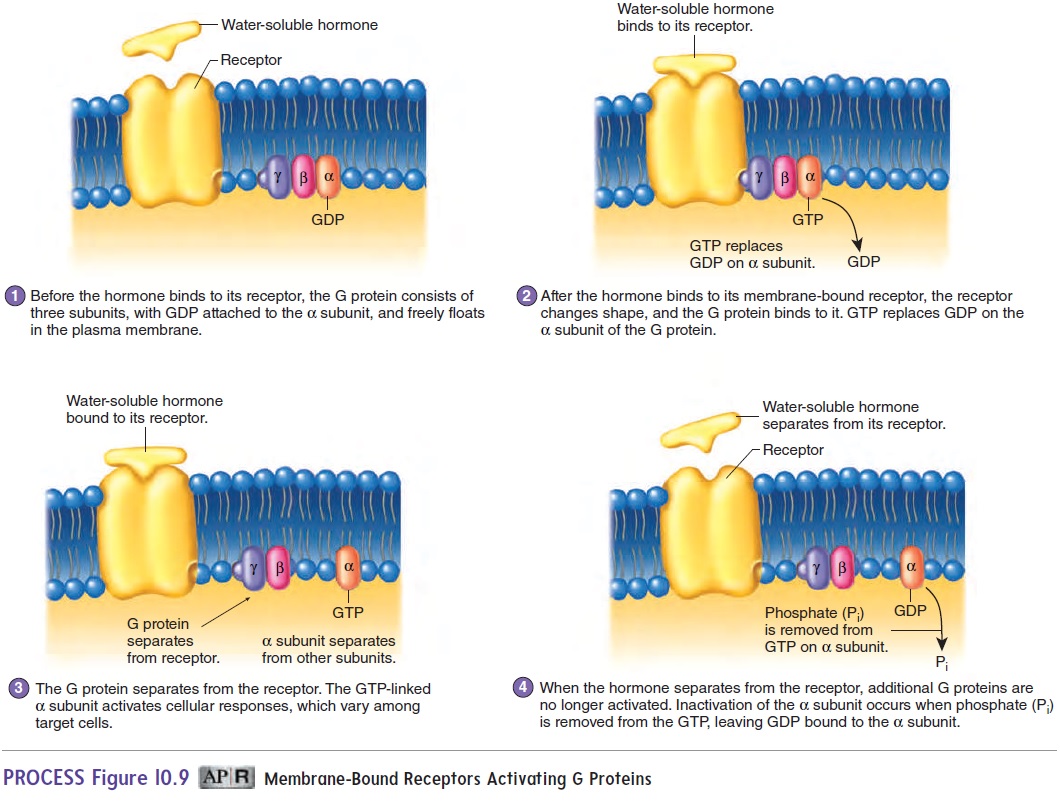 Activated α subunits of G proteins can alter the activity of enzymes inside the cell. For example, activated α subunits can influence the rate of cAMP formation by activating or inhibiting adenylate cyclase (a-den′ i-lāt sı̄′ klās), an enzyme that convertsATP to cAMP (figure 10.10). Cyclic AMP functions as a second messenger. For example, cAMP binds to protein kinases and acti-vates them. Protein kinases are enzymes that, in turn, regulate the activity of other enzymes. Depending on the other enzyme, protein kinases can increase or decrease its activity. The amount of time cAMP is present to produce a response in a cell is limited. An enzyme in the cytoplasm, called phosphodiesterase (fos′ fō-dı̄-es′ ter-ās), breaks down cAMP to AMP. Once cAMP levels drop, the enzymes in the cell are no longer stimulated.

Cyclic AMP can elicit many different responses in the body because each cell type possesses a unique set of enzymes. For example, the hormone glucagon binds to receptors on the surface of liver cells, activating G proteins and causing an increase in cAMP synthesis, which stimulates the activity of enzymes that break down glycogen into glucose for release from liver cells (figure 10.10).

Nuclear receptors work by activating protein synthesis, which for some hormones can take several hours (see “Action of Nuclear receptors” earlier). However, hormones that stimu-late the synthesis of second messengers can produce an almost instantaneous response because the second messenger influ-ences existing enzymes. In other words, the response proteins are already present. Additionally, each receptor produces thousands of second messengers, leading to a cascade effect and ultimately amplification of the hormonal signal. With amplification, a singlehormone activates many second messengers, each of which acti-vates enzymes that produce an enormous amount of final product (figure 10.11). The efficiency of this second­-messenger amplifica-tion is virtually unparalleled­ in the body and can be thought of as an “army of molecules” launching an offensive. In a war, the general gives the signal to attack, and thousands of soldiers carry out the order. The general alone could not eliminate thousands of enemies. Likewise, one hormone could not single-handedly produce millions of final products within a few seconds. However, with amplification, one hormone has an army of molecules working simultaneously to produce the final products. 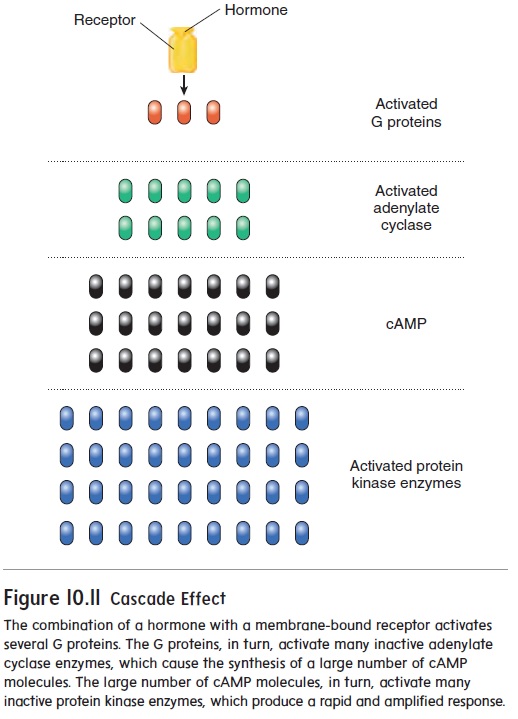 Both nuclear receptor and membrane-bound receptor hormone systems are effective, but each is more suited to one type of response than another. For example, the reason epinephrine is effective in a fight-or-flight situation is that it can turn on the target cell responses within a few seconds. If running away from an immediate threat depended on producing new proteins, a process that can take several hours, many of us would have already perished. On the other hand, pregnancy maintenance is mediated by steroids, long-acting hor-mones, which is reflected by the fact that pregnancy is a long-term process. Thus, it is important that our bodies have hormones that can function over differing time scales.