The thioamides methimazole and propylthiouracil are major drugs for treatment of thyrotoxicosis.

The thioamides methimazole and propylthiouracil are major drugs for treatment of thyrotoxicosis. In the United Kingdom, carbimazole, which is converted to methimazole in vivo, is widely used. Methimazole is about ten times more potent than propylth-iouracil and is the drug of choice in adults and children. Due to a black box warning about severe hepatitis, propylthiouracil should be reserved for use during the first trimester of pregnancy, in thy-roid storm, and in those experiencing adverse reactions to methi-mazole (other than agranulocytosis or hepatitis). The chemical structures of these compounds are shown in Figure 38–5. The thiocarbamide group is essential for antithyroid activity. 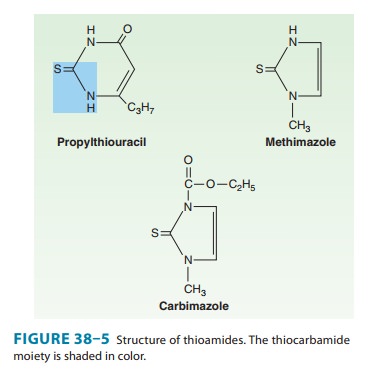 Methimazole is completely absorbed but at variable rates. It is readily accumulated by the thyroid gland and has a volume of distribution similar to that of propylthiouracil. Excretion is slower than with propylthiouracil; 65–70% of a dose is recovered in the urine in 48 hours.

In contrast, propylthiouracil is rapidly absorbed, reaching peak serum levels after 1 hour. The bioavailability of 50–80% may be due to incomplete absorption or a large first-pass effect in the liver. The volume of distribution approximates total body water with accumulation in the thyroid gland. Most of an ingested dose of propylthiouracil is excreted by the kidney as the inactive glucuronide within 24 hours.

The short plasma half-life of these agents (1.5 hours for propyl-thiouracil and 6 hours for methimazole) has little influence on the duration of the antithyroid action or the dosing interval because both agents are accumulated by the thyroid gland. For propyl-thiouracil, giving the drug every 6–8 hours is reasonable since a single 100 mg dose can inhibit iodine organification by 60% for 7 hours. Since a single 30 mg dose of methimazole exerts an anti-thyroid effect for longer than 24 hours, a single daily dose is effec-tive in the management of mild to severe hyperthyroidism.

Both thioamides cross the placental barrier and are concen-trated by the fetal thyroid, so that caution must be employed when using these drugs in pregnancy. Because of the risk of fetal hypothyroidism, both thioamides are classified as Food and Drug Administration pregnancy category D (evidence of human fetal risk based on adverse reaction data from investigational or market-ing experience). Of the two, propylthiouracil is preferable during the first trimester of pregnancy because it is more strongly protein-bound and, therefore, crosses the placenta less readily. In addition, methimazole has been, albeit rarely, associated with congenital malformations. Both thioamides are secreted in low concentrations in breast milk but are considered safe for the nursing infant.

The thioamides act by multiple mechanisms. The major action is to prevent hormone synthesis by inhibiting the thyroid peroxi-dase-catalyzed reactions and blocking iodine organification. In addition, they block coupling of the iodotyrosines. They do not block uptake of iodide by the gland. Propylthiouracil and (to a much lesser extent) methimazole inhibit the peripheral deiodina-tion of T4 and T3 (Figure 38–1). Since the synthesis rather than the release of hormones is affected, the onset of these agents is slow, often requiring 3–4 weeks before stores of T4 are depleted. 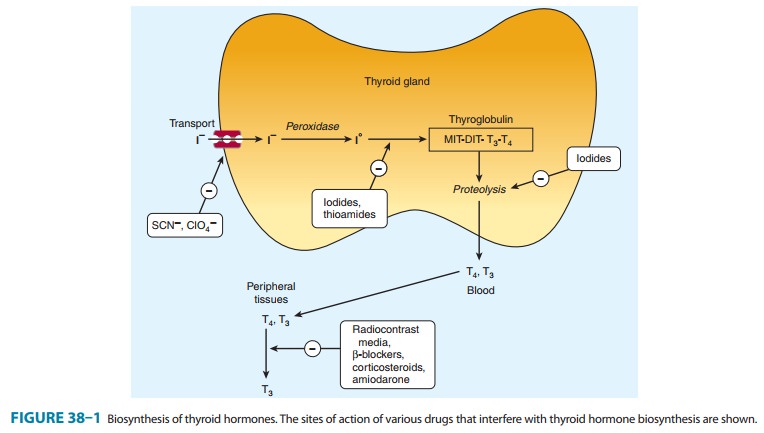 Adverse reactions to the thioamides occur in 3–12% of treated patients. Most reactions occur early, especially nausea and gastro-intestinal distress. An altered sense of taste or smell may occur with methimazole. The most common adverse effect is a maculo-papular pruritic rash (4–6%), at times accompanied by systemic signs such as fever. Rare adverse effects include an urticarial rash,vasculitis, a lupus-like reaction, lymphadenopathy, hypopro-thrombinemia, exfoliative dermatitis, polyserositis, and acute arthralgia. An increased risk of severe hepatitis, sometimes result-ing in death, has been reported with propylthiouracil (black box warning), so it should be avoided in children and adults unless no other options are available. Cholestatic jaundice is more common with methimazole than propylthiouracil. Asymptomatic eleva-tions in transaminase levels can also occur.

The most dangerous complication is agranulocytosis (granulo-cyte count < 500 cells/mm3), an infrequent but potentially fatal adverse reaction. It occurs in 0.1–0.5% of patients taking thioam-ides, but the risk may be increased in older patients and in those receiving more than 40 mg/d of methimazole. The reaction is usu-ally rapidly reversible when the drug is discontinued, but broad-spectrum antibiotic therapy may be necessary for complicating infections. Colony-stimulating factors (eg, G-CSF;) may hasten recovery of the granulocytes. The cross-sensitivity between propylthiouracil and methimazole is about 50%; there-fore, switching drugs in patients with severe reactions is not recommended.