The discoveries made during the twentieth century proved that atoms of all elements are made up of smaller components -electron, proton and neutron.

The discoveries made during the twentieth century proved that atoms of all elements are made up of smaller components -electron, proton and neutron. An electron from hydrogen atom is no different from electron of a carbon atom. In the same manner, protons and neutrons of all elements also have same characteristics. These particles that make up the atom are called Subatomic Particles. 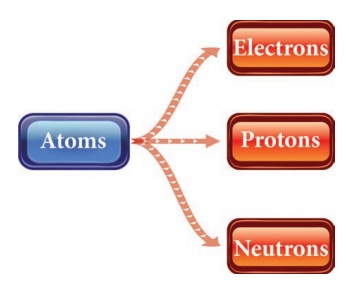 The proton is the positively charged particle and its located in the nucleus. Its positive charge is of the same magnitude as that of the electron’s negative charge.

Neutron is inside the nucleus. The neutron does not have any charge. Excepting hydrogen (protium), the nuclei of all atoms contain neutrons.

This is a negatively charged particle. Electrons revolve around the nucleus of the atom in specific orbits. The mass of an electron is negligible as compared to that of a proton or neutron. Hence, the mass of an atom depends on the number of protons and neutrons in the nucleus.

Protons and Neutrons are the two types of particles in the nucleus of an atom. They are called nucleons.The total negative charge of all an electrons outside the nucleus is equal to the total positive charge in the nucleus. That makes the atom electrically neutral.

Charge and mass of the sub atomic particles:

Let us learn the characteristics of the subatomic particles through the following activity. Label the parts in the given diagram and answer the following. 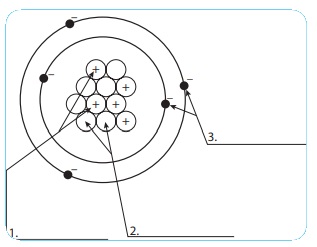