The final act of spawning may take place in the water column, above the bottom, in contact with plants and rocks, and in some special cases, out of water.

The final act of spawning may take place in the water column, above the bottom, in contact with plants and rocks, and in some special cases, out of water. In external fertilizers, behaviors associated with spawning often involve rapid swimming, quivering, vibrating, fin spreading, and enfolding of the female with the male’s fins or body. The breeding tubercles and contact organs common in many fishes (see above) may help maintain contact between members of a pair and may also stimulate the female. Internally fertilizing species also engage in elaborate courtship sequences. Male Guppies perform a variety of actions involving following, luring, biting, and sigmoid swimming that display their fins and body coloration until a female allows them to approach and copulate. The sequence and types of displays by the male serve as a species-isolating mechanism in that females reject males of the wrong species after viewing their courtship displays (Keenleyside 1979).

Species-specific sounds may also be produced during the spawning act itself. For example, in the simultaneously hermaphroditic hamlets, the “male” emits a courtship call and the “female” a spawning call. As individuals switch roles during a prolonged spawning bout, they also switch the sounds they produce (Lobel 1992).

Although the great majority of fishes spawn as part of large groups, pairing of individual males and females within these groups is common. Short-term pair formation probably assures efficient gamete release and fertilization; haphazard release of gametes could result in a large proportion of eggs going unfertilized because sperm become inviable and are rapidly diluted in open water, and eggs become unfertilizable within minutes after release (Hubbs 1967; Petersen et al. 1992). Codfishes spawn in large aggregations, but males establish small territories, actively court individual females using visual, tactile, and acoustic signals, and the pair moves synchronously to the surface where gametes are released while the genital openings of both fish are in close contact (Brawn 1961). Aggressive defense of females and pair spawning also occurs in schooling tunas (Magnuson & Prescott 1966). Pair spawning characterizes most epinepheline seabasses, which also form large breeding aggregations.

Group spawning, involving more than two fish, usually involves one female accompanied by several males (Fig. 21.6). This is the pattern in group-spawning minnows, suckers, salmon, smelt, wrasses, and surgeonfishes. In groups of Bluehead Wrasse, males release sperm in direct proportion to the number of eggs released by the female and the number of competing males in the group (Shapiro et al. 1994). In fishes with alternative mating systems, such as wrasses and parrotfishes on coral reefs, some individuals spawn as pairs whereas others spawn in multiple male groups (see above). Truly random spawning associations, as described for promiscuous species, occur most frequently in water column spawners or in such benthic spawners as herring (Keenleyside 1979). 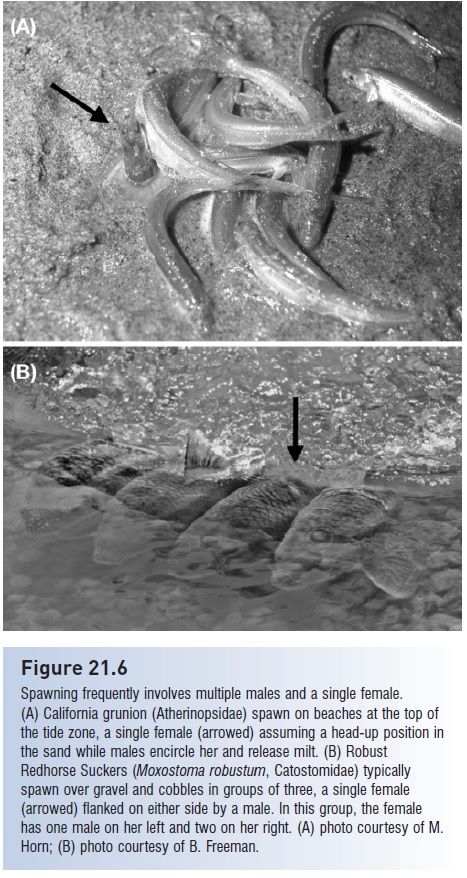 Spawning frequently involves multiple males and a single female. (A) California grunion (Atherinopsidae) spawn on beaches at the top of the tide zone, a single female (arrowed) assuming a head-up position in the sand while males encircle her and release milt. (B) Robust Redhorse Suckers (Moxostoma robustum, Catostomidae) typically spawn over gravel and cobbles in groups of three, a single female (arrowed) flanked on either side by a male. In this group, the female has one male on her left and two on her right. (A) photo courtesy of M. Horn; (B) photo courtesy of B. Freeman.

Water column spawners on coral reefs often rush rapidly upward and release their gametes at the top of the rush, sometimes near the surface. Speeds approach 40 km/ h in the Striped Parrotfish, Scarus croicensis (Colin 1978). This pattern has been observed in more than 50 species in over 18 families. Its function(s) are debated. Movement up in the water column places the eggs out of reach of many benthic or near-benthic invertebrate and vertebrate zooplanktivores and into currents that promote dispersal. However, by moving away from the reef, spawning adults face the conflicting threat of piscivores (e.g., Sancho et al. 2000a, 2000b). Not surprisingly, well-defended spawners (e.g., larger seabasses, trunkfishes, porcupinefishes) move higher in the water or spawn more slowly than smaller, more vulnerable species (Thresher 1984). For many species, the spawning rush may serve as a final synchronizing event in the courtship sequence and may also help evade the sneakers and streakers that abound close to the reef (e.g., Sancho 1998). Left unanswered is the question of why surface rushes are uncommon in other habitat types.

Substrate-spawning fishes are less likely to form large groups than water column spawners; they also release fewer eggs at each spawning. Males typically set up territories over appropriate spawning substrate, chase away intruding males, and court passing females. Females enter the territory and deposit one or a few adhesive eggs while the male folds his body or fins around her and presses her against the substrate. Sperm release occurs almost immediately, again in part because sneaker and streaker males are always nearby. Paternity can be assured, from the male’s point of view, if females facilitate fertilization by taking sperm into the mouth, as happens in many cichlids (Fig. 21.7).

An interesting variation on oral fertilization occurs in callichthyid catfishes of the genus Corydoras, the popular armored catfishes of the aquarium trade. In these catfishes, the female places her mouth over the genital opening of the male and drinks his sperm. She then passes the sperm rapidly through her digestive system, extrudes eggs which are held between her pelvic fins, and releases the male’s sperm to fertilize the eggs, which are then deposited on the substrate.Sperm drinking could be one way of a female maximizing control over which male fertilizes her eggs. Sperm viability in the female’s gut may be facilitated by the specialized nature of the callichthyid intestine, which is modified for air breathing (see  Air-breathing fishes). Callichthyids pass air bubbles rapidly from their mouths to their intestines, perhaps preadapting them for passing sperm through quickly and unharmed (Kohda et al. 1995).

Fishes that spawn on the bottom generally use available structure to protect their eggs. Many eggs are adhesive and stick to plants, rocks, woody debris, shells, or other hard substrates (e.g., herring, silversides, cichlids). Some eggs have tendrils or projections that wrap around plants and debris (e.g., skates, halfbeaks, flyingfishes). Eggs of the Port Jackson Shark (Heterodontidae) have an augerlike whorl around their exterior. Females lay these eggs in cracks and water motion apparently serves to screw the egg deeper into the substrate. California Grunion (Leuresthes tenuis, Atherinopsidae) spawn on sandy beaches after high tides on dark nights following a full or new moon. Capelin (Mallotus villosus, Osmeridae) also ride waves up beaches and deposit their eggs in the sand, although subtidal spawning is more common. A few fish species use live invertebrates as a spawning site. Marine snailfishes,Careproctus spp. (Liparidae), lay their eggs inside the gill chambers of various crabs. Species of bitterling, Rhodeus (Cyprinidae), use freshwater mussels as a spawning site. The male first defends and displays over a particular mussel. The female deposits eggs into the gill chamber of the bivalve using her long ovipositor, after which the male ejaculates over the incurrent siphon of the mussel. Eggs develop inside the mussel and emerge as free-swimming young (Breder & Rosen 1966).

The act of spawning brings together fish that may normally be solitary, territorial, or extremely sensitive to predators, often at locales they seldom frequent. Spawning aggregations are especially common among coral reef species, engaged in by at least 164 species in 26 families, the best known being seabasses, snappers, wrasses, parrotfishes, and surgeonfishes (Claydon 2005). As a possible mechanism to help overcome behaviors that would be counterproductive at this critical moment in a fish’s life, many fishes exhibitspawning stupor. When in a spawning aggregation or mode, species that are normally difficult to approach or are very active instead move slowly, in an almost trancelike state. They take little or no evasive action when approached by predators or divers. Spawning stupor has been observed in minnows, suckers, mullets, silversides, seabasses, pompanos, and snappers (Johannes 1981; Helfman 1986; Johannes et al. 1999). Most observations are anecdotal, leaving open an excellent opportunity for quantified or manipulative investigations that have grown in importance because aggregating spawners are especially vulnerable to overexploitation (e.g., Fewings & Squire 1999, Sadovy & Cheung 2003).