Many fishes spawn in nests. Nests may be no more elaborate than a simple depression that either or both sexes excavate in the bottom by fanning vigorously with the fins or by swimming rapidly in place (e.g., lampreys, Bowfin, trahiras, sunfishes).

Many fishes spawn in nests. Nests may be no more elaborate than a simple depression that either or both sexes excavate in the bottom by fanning vigorously with the fins or by swimming rapidly in place (e.g., lampreys, Bowfin, trahiras, sunfishes). In lampreys and salmon, the eggs are covered with additional sand or gravel and then abandoned, whereas in other species the male remains to guard the exposed eggs. Many species spawn in a rock crevice or space on or under a shell or rock or in a hollowed log that has been excavated or picked clear of growth and debris (e.g., ictalurid catfishes, sculpins, poachers, darters, cichlids, damselfishes, clingfishes, sleepers, gobies). Some damselfishes “sandblast” a surface clean by spitting sand against it and then fanning it with their fins. The European Wrasse, Crenilabrus melops, lines a rock crevice with different types of algae. Softer algae at the back of the crevice serve as a substrate for spawning, whereas tougher, stickier coralline algae are packed into the outer portion of the crevice to protect the eggs.

Burrows are excavated and later guarded by lepidosirenid lungfishes, ictalurid catfishes, jawfishes, tilefishes, and gobies. Males of some stream minnows construct nest mounds by piling as many as 14,500 small stones, 6–12 mm in diameter, that are carried in the mouth to the nest site from as far as 4 m away (e.g., Nocomis, Semotilus, Exoglossum). Eggs deposited by the female fall into the interstices between the stones and are covered by additional stones; the nest is guarded and kept free of silt by the male (Breder & Rosen 1966; Keenleyside 1979; Potts 1984; Thresher 1984; Wallin 1989, 1992; Johnston 1994). In African cichlids  males build nests in sand, some of elaborate design (Fig. 21.5). These structures have been likened to the bowers of bowerbirds because they are primarily display, courtship, and spawning stations from which the female picks the eggs up in her mouth almost as quickly as they are laid (Fryer & Iles 1972; McKaye 1991). 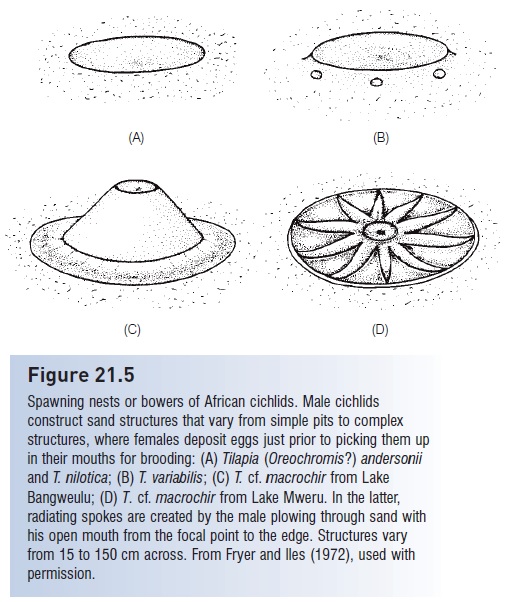 Nests can also be constructed of intrinsically produced materials, sometimes combined with extrinsically gathered objects. Gouramis and Siamese Fighting Fishes (Anabantoidei) and Pike Characins produce bubble or froth nests, consisting of mucus-covered bubbles that stick together in a mass. Some anabantoids add plant fragments, detritus, sand, and even fecal particles to the bubble mass. Male sticklebacks pass a mucoidal, threadlike substance manufactured in the kidneys out through the cloaca, using it to bind together pieces of leaves, grasses, and algal filaments that create a cup or tunnel nest in which a female deposits eggs. All of these structures are tended by the male following spawning (Wootton 1976; Keenleyside 1979).