Extent and diversity of care - Parental care of Fishes

Parental care is surprisingly common, widespread, and diverse in fishes .

Extent and diversity of care

Parental care is surprisingly common, widespread, and diverse in fishes (Breder & Rosen 1966; Blumer 1979, 1982; Baylis 1981; Potts 1984; Keenleyside 1991; Sargent & Gross 1994, DeMartini & Sikkel 2006). Although most species scatter or abandon eggs upon or after fertilization, approximately 90 of the c. 460 families of bony fishes include species that engage in some form of defense or manipulation of eggs and young (Table 21.2; Mank et al. 2005 put the number closer to 30%, or 150 families). Parental care is more necessary for demersal or adhesive eggs that are likely to be found by predators searching along the bottom or among plants or other structure. Hence it is not surprising that few if any species with pelagic, floating eggs provide care for them.

A classification of reproductive guilds in teleost fishes, based largely on spawning site and parental care patterns. Specific examples of many groups are given in Table 20.1. From Moyle and Cech (2004) and Wootton (1990, 1999), based on Balon (1975, 1981) with modifications.

Parental care includes: construction and maintenance of a nest; burying eggs once deposited in the nest; chasing potential egg and fry predators from the nest; fanning or splashing eggs or young with the mouth, fins, or body to provide oxygen and to flush away sediments and metabolic wastes; removal of dead or diseased eggs; cleaning eggs by taking them into the mouth and then returning them to the nest; carrying eggs or young in the mouth or gill chambers, in a ventral brood pouch, or externally on the head, back, or belly; coiling around the egg mass to prevent desiccation; retrieving eggs or young that wander from the nest or aggregation; accompanying foraging young and providing refuge or defense when predators approach; secreting specialized mucus that inhibits pathogen growth or that freeswimming young eat; and provisioning young or aiding them in the capture of food.

Internal gestation of young is a special type of parental care shown by many Chondrichthyes but occurs in only 14 families of bony fishes. Placental connections, common in Chondrichthyes, occur in only one osteichthyan family, the Mexican goodeids (Blumer 1979; Wourms 1988) (Fig. 21.8), although transfer of nutrients directly from mother to developing young (matrotrophy) has been demonstrated in poeciliid livebearers and sebastine scorpaenids (Marsh- Matthews et al. 2001; DeMarais & Oldis 2005; DeMartini& Sikkel 2006), and its analog (patrotrophy?) is thought to occur in pregnant male seahorses and pipefishes (e.g., Haresign & Shumway 1981; Berglund et al. 1986a, 1986b).

Well-developed (near-term) embryos in the ovary of a Mexican goodeid, the Butterfl y Splitfin, Ameca splendens; 13 embryos are visible. The anterior third of the ovary is not shown. Fingerlike extensions projecting forward from the ovary are trophotaenia, which are epithelial structures that grow from the embryos’ anal regions and serve to take up nutrients provided by the mother. Trophotaenia have evolved convergently in goodeids, ophidioids, and embiotocid surfperches. of, oocytes; om, ovarian mesentery; os, ovarian septum, ow, ovarian wall. Regrettably, A. splendens is considered to be extinct in the wild, although it is commonly kept and bred in aquaria (IUCN 2006). Drawing by Julian Lombardi, from Wourms et al. (1988), used with permission.

Although much guarding involves simple behavior derived from everyday activities, such as fanning eggs with the pectoral fins to maintain adequate oxygen levels (e.g., Green & McCormick 2005), some parental activities represent surprisingly unique specializations. For example, in many seahorses and pipefishes, females lay their eggs at the entry to brood pouches on the male’s belly, a structure that varies in complexity within the family.

A male Nurseryfish, Kurtus gulliveri, with eggs attached to his occipital crest. Length about 15 cm. Drawing originally in Weber (1913), reproduced in Berra (2001).

The pregnant male fertilizes the eggs and retains and protects the eggs and young inside the pouch, helping them osmoregulate and providing them with oxygen and perhaps nutrition until they reach a relatively advanced stage of development(e.g., Wilson et al. 2003a). “Birth” involves contractions and contortions by the male that expel the young from the pouch. In the kurtoid nurseryfishes, an advanced perciform suborder of the southwestern Pacific, males develop a unique, downward-bent, hook on their foreheads to which the eggs are attached and carried until hatching (Fig. 21.9). The hook develops as a modification of the supraoccipital crest of the skull and is covered by highly vascularized, folded skin. Just how the eggs get there is a matter of conjecture (Berra & Humphrey 2002).

One of the most unusual parental patterns is shown by the Spraying Characin (Copella, Lebiasinidae), which deposits its eggs out of water. The male and female line up under a leaf and leap together as much as 10 cm into the air, turning upside down and adhering to the leaf ’s underside momentarily. 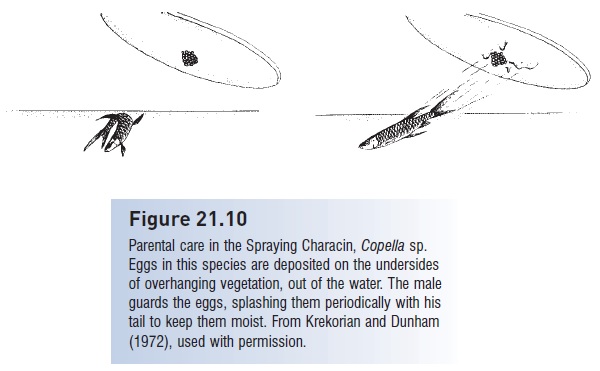 Parental care in the Spraying Characin, Copella sp. Eggs in this species are deposited on the undersides of overhanging vegetation, out of the water. The male guards the eggs, splashing them periodically with his tail to keep them moist. From Krekorian and Dunham

In this manner, a dozen or so fertilized eggs are stuck repeatedly to the leaf. Over the next 2–3 days, the male moistens the egg mass by splashing it at 1 min intervals with flips of his tail, correcting for refraction at the water’s surface (Fig. 21.10). Newly hatched young fall into the water (Krekorian & Dunham 1972).

Preventing desiccation of eggs exposed to air also explains unusual parental care in intertidal species. Several small, elongate intertidal fishes coil their bodies around the egg mass as the tide goes out, thus trapping a small pool of water in which the eggs sit. This behavior has been recorded for pricklebacks, gunnels, and wolf-eels (Blumer 1982). Other fishes that spawn in the intertidal, such as temperate wrasses and sculpins, cover the eggs with algae, thus controlling desiccation during low tides (Potts 1984). Rockhopper Blennies, Andamia tetradactyla, spawn in supralittoral nests in crevices that are above the high water mark for about 12 h daily, the male remaining with the eggs throughout the day (Shimizu et al. 2006). Depositing eggs above the intertidal – covered with algae, deposited among rocks, or buried in sand – has many surprising advantages, once desiccation is prevented. Higher incubation temperatures, higher oxygen concentrations, and reduced predation are among the considered benefits (e.g., DeMartini 1999).

A few fishes provide food for their young via epidermal secretions. Such trophic provisioning has been observed in bagrid catfishes and in several cichlids, including discus (Symphysodon), Midas Cichlid, as well as members of the genera Aequidens, Etroplus, and Oreochromis (Fig. 21.11A). This form of parental care is suspected in numerous other cichlids, and in a bonytongue and a damselfish. Thickened scales and increased mucus production have been identified in the adults of provisioning species. The importance of provisioning relative to other food sources of the young is unclear (Noakes 1979). Many sharks, and perhaps the living coelacanths, produce trophic eggs that are eaten by developing embryos prior to hatching. One bagrid catfish in Lake Malawi, Africa, feeds trophic eggs to free-living juveniles. Bagrus meridionalis young position themselves under the vent of the guarding female and apparently ingest eggs as they are extruded by the mother; 40% of the young in a nest may have such eggs in their stomachs. Circumstantial evidence indicates that the parental male also helps feed the young by uncovering invertebrates present in the nest or even by spitting out invertebrates captured elsewhere into the nest (LoVullo et al. 1992).

Epidermal secretions serve additional, care-giving functions Recent studies have shown that guarding males have specialized regions of their bodies that produce mucus with antimicrobial functions that directly benefit developing young. Nest-guarding male Fringed Darters, Etheostoma crossopterum, have a mucus-cell-rich region on the top of their heads. Lab tests showed that the mucus had both antibacterial and antifungal activity, and egg clutches with a guarding male present had lower mortality and signifi - cantly reduced rates of fungal and bacterial infection (Knouft et al. 2003). Earlier observations suggested that the male actively coats the eggs with mucus. Male Redlip Blennies, Ophioblennius atlanticus, and Peacock Blennies, Salaria pavo, produce a mucus enriched with antimicrobial substances from their specialized, sexually dimorphic, anal glands (Giacomello et al. 2006). When tending eggs, the males frequently rub their anal region over the nest surface, which could serve to transfer mucus to the eggs. Antimicrobial activity is turning up increasingly as different taxa are explored, and a new class of antibiotic peptides called piscidins has been isolated in fish mucus (Noga & Silphaduang 2003). It is a short adaptive jump from producing mucus to using such mucus to aid the survival of developing young, and it would not be surprising to find such parental specializations in other species.

The bottom of the ocean, lake, or a stream is a relatively hazardous environment for defenseless eggs, and many species carry the eggs rather than leave them deposited on the substrate. Mouth or oral brooding is the most common form of egg-carrying, having been documented in at least six families (sea catfishes, lumpfishes, cardinalfishes, cichlids, jawfishes, gouramis); gill chamber brooding occurs in North American blind cavefishes. Eggs are picked up, usually by the male, shortly after fertilization. In the case of some cichlids, eggs are fertilized in the female’s mouth, where they are retained (see Fig. 21.7). In cichlids, oral brooding extends well beyond hatching. Free-swimming young forage as part of a shoal near the female. When predators approach, the female signals the young by backing slowly with the head down. The young swim towards her head and she sucks them into her mouth (Fig. 21.11B). Some predatory cichlids will ram the head region of females that are carrying young, forcing them to spit a few out, which are then engulfed by the predator (McKaye & Kocher 1983). 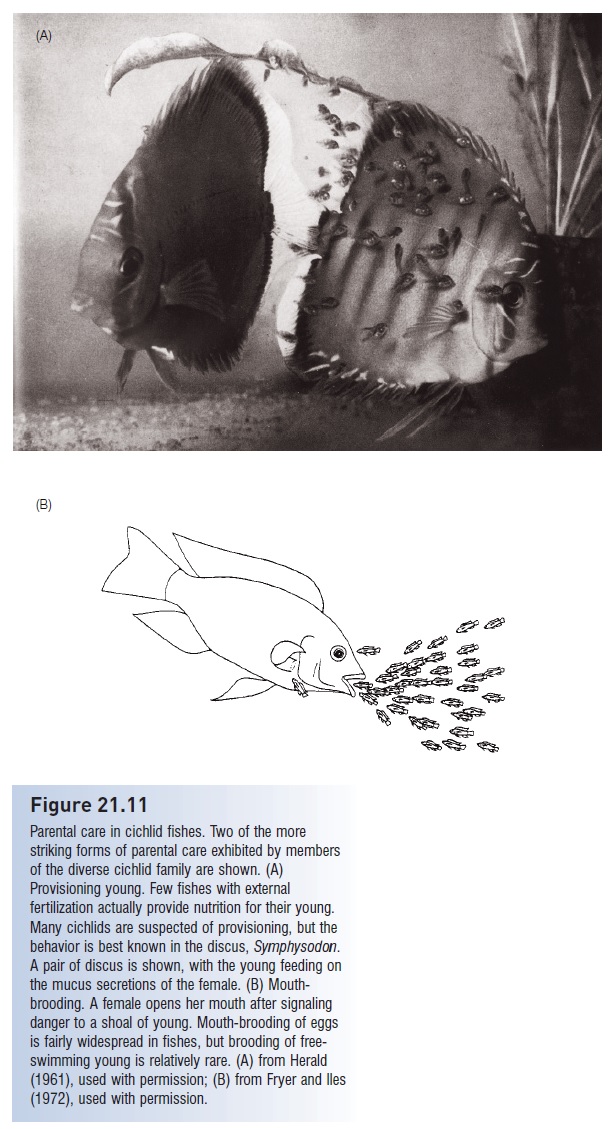 Parental care in cichlid fishes. Two of the more striking forms of parental care exhibited by members of the diverse cichlid family are shown. (A) Provisioning young. Few fishes with external fertilization actually provide nutrition for their young. Many cichlids are suspected of provisioning, but the behavior is best known in the discus, Symphysodon. A pair of discus is shown, with the young feeding on the mucus secretions of the female. (B) Mouthbrooding. A female opens her mouth after signaling danger to a shoal of young. Mouth-brooding of eggs is fairly widespread in fishes, but brooding of freeswimming young is relatively rare. (A) from Herald (1961), used with permission; (B) from Fryer and Iles (1972), used with permission

Other forms of external carrying include attachment of eggs to the male’s lower lip (suckermouth armored catfishes) or head (nurseryfishes), or the belly of either parent (bagrid and banjo catfishes) (Breder & Rosen 1966; Balon 1975a; Blumer 1982; Berra & Humphrey 2002).