Mating systems are defined by the number of mating partners an individual has during a breeding season.

Mating systems are defined by the number of mating partners an individual has during a breeding season (Table 21.1). The three most common categories are promiscuous, polygamous, and monogamous. Promiscuous breeders are those in which little or no obvious mate choice occurs, where both males and females spawn with multiple partners, either at one time or over a short period. Such spawning has been documented for the Baltic Herring (Clupeidae), Guppies (Poeciliidae), Nassau Groupers (Serranidae),humbug damselfish colonies (Pomacentridae), cichlids, and the Creole Wrasse (Labridae) (Thresher 1984; Barlow 1991; Turner 1993).

Polygamy, where only one sex has multiple partners, takes multiple forms. Polyandry, where one female mates with several males (and presumably not vice versa), is relatively uncommon, so far documented only in an anemonefish (Pomacentridae) (Moyer & Sawyers 1973). Polyandry might also be descriptive of female ceratioid anglerfishes which have more than one male attached (see  The deep sea). Polygyny is the most common form, involving males as the polygamous sex. Territorial males that care for eggs and young are frequently visited by several females, as in sculpins, sunfishes, darters, damselfishes, and cichlids. Polygyny can also develop into harem formation, where a male has exclusive breeding rights to a number of females that he may guard. Harems have been observed in numerous cichlids and in several coral reef families (e.g., tilefishes, anthiine serranids, damselfishes, wrasses, parrotfishes, surgeonfishes, triggerfishes).

Many polygynous animals form leks, which are traditional areas where several males congregate for the sole purpose of displaying to females (Emlen & Oring 1977). Females are often attracted to a male in response to his central position within the lekking ground, or to the vigor of his display and bright plumage. Lekking is common in birds and mammals, in which only the female provides parental care. Some African cichlids come closest to forming true leks. Large numbers (c. 50,000) of male Cyrtocara eucinostomus congregate along a shallow 4 km long shelf in Lake Malawi and build sand nests and display to passing females each morning. Females spawn and then mouthbrood eggs elsewhere. The male aggregations break up each afternoon, when fish feed (McKaye 1983, 1991). Some fishes form “leklike” aggregations of males (e.g., Arctic Char, Atlantic Cod, damselfishes, wrasses, parrotfishes, surgeonfishes), but the display ground is also an appropriate place for launching or caring for eggs, which stretches the definition of lekking (Loiselle & Barlow 1978; Moyer & Yogo 1982; Figenschou et al. 2004; Windle & Rose 2007). In a unique variation on leklike behavior, female triggerfish (Odonus niger, Balistidae) form a communal display ground for 1 day before spawning, after which they all mate with a single, nearby male (Fricke 1980).

In monogamous systems, fish live in pairs that stay together and mate, or mate with the same individual repeatedly and exclusively, regardless of pairing at nonmating times. Strongly pairing species include North American freshwater catfishes, many butterfl yfishes and angelfishes, most substrate guarding and some mouthbrooding cichlids, and anemonefishes; in the butterfl yfishes, pairs may remain together for several years and probably mate for life (Reese 1975). Monogamous coral reef fishes commonly spawn with the same partner on a daily basis over an extended period without ensuing care of young, whereas freshwater species such as cichlids spawn over a limited time and then both parents typically care for the young. Monogamy has evolved independently in many groups, often in conjunction with territoriality and paternal care (Whiteman & Côté 2004). Monogamy is also known in freshwater bonytongues, bagrid and airsac catfishes, and snakeheads, and among at least 18 marine families, including pipefishes and seahorses, hermaphroditic hamlets, jawfishes, cardinalfishes, tilefishes, hawkfishes, damselfishes, wrasses, blennies, gobies, wormfishes, surgeonfishes, triggerfishes, filefishes, and pufferfishes (Barlow 1984, 1986; Thresher 1984; Turner 1993, Whiteman & Côté 2004). 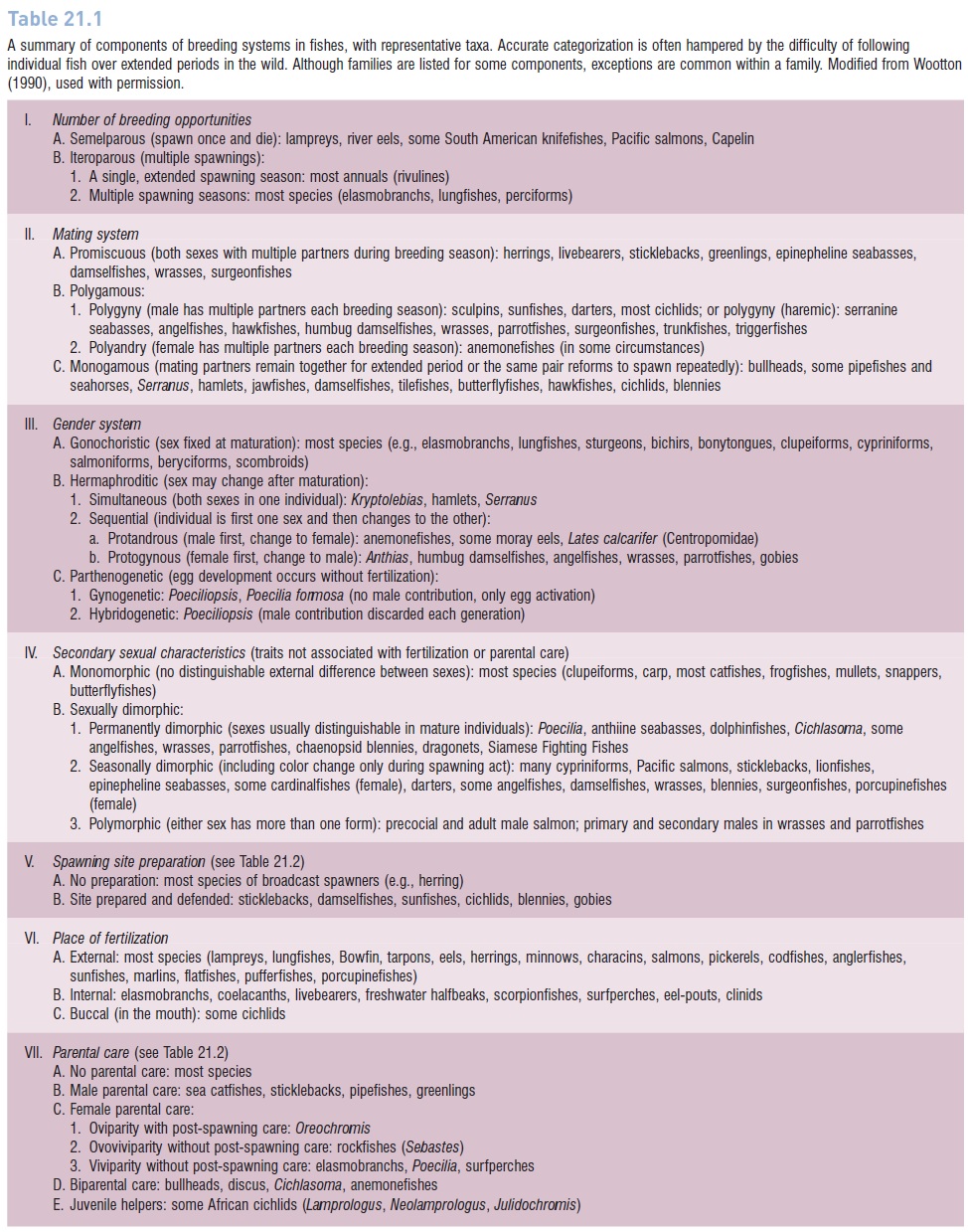