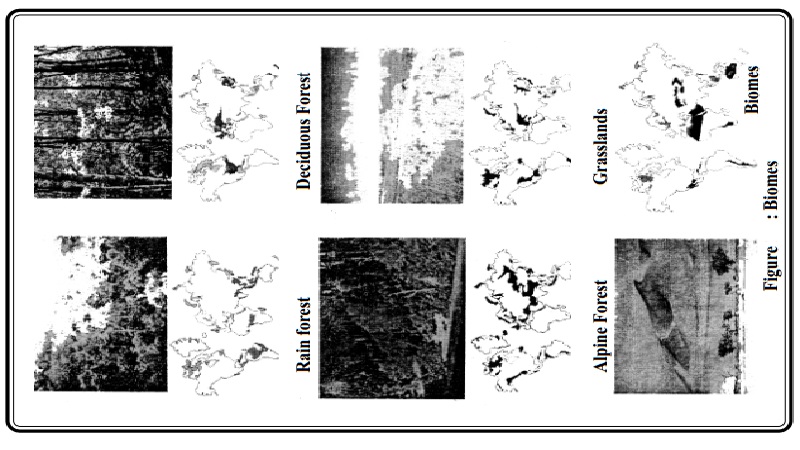 Pyramidal trees with needle like leaves are a special feature of this biome. Immense colonies of same species are commonly found here. As there is plenty of food and protection, the biome is rich in flora and fauna. Karibu and Rodents are in abundance. Foxes

and Minsks are bred and brought up by the people. Woodpeckers and Grosbeaks are the birds that live hereabout.

The birds migrate from the southern regions and live here in the spring and leave here only in winter. However, the animals have the furs that could stand severe cold. The Red Cross Bill that lives here has a strong beak that could break the hardest of the nuts to get at the kernel. In the severe climatic conditions here, humans are unable to live naturally. Further, this region is far away from the other regions of the world. Therefore, a vast expanse of several thousands of square kilometres remain uninhabited. The tribes here have hunting and fishing as the most important activities.

Temperate, Deciduous Forest Biome: This biome is found along the western and the eastern continental margins of the mid latitudes. This biome is found in both the hemispheres. However, it is seen in a vast area in the northern hemisphere. It is in areas such as those of the eastern United States, southern Chile, southeast Australia, Tasmania and New Zealand. Here, the winter is mildly warmer and the summer is mildly hot. The annual rainfall is regular and high. It is here the brownish forest soils are found.

In the forests here, the trees grow tall. They shed their leaves in the months of January and February. It is for this reason, the forests here are known as the deciduous forests. The Oak, the Maple and the Peach that grow here have broad leaves and thick stems. In the European regions, the deer, bears, oxen, wolves, foxes, pigs and wild cats besides other small animals are seen. In the American deciduous forests, there live deer, bear, panther, red fox and squirrel. These animals, to avoid the cold during the winter, go into hibernation. Therefore, they gather food and store them for the winter much before the cold begins.

The deciduous forests are not as widespread in the southern hemisphere as they are in the northern hemisphere. In the forests of Chile, the Peaches are the dominant. In Australia and New Zealand, there are unique plants and animals.

Except for the forests of the Mediterranean, the other forest biomes of this variety elsewhere are being changed much by the humans. In Eurasia, this biome is the target for human settlements. The prevalent environment here is conducive to human life and living. Therefore, a large number of people live here. They are engaged in fishing, mining, timbering and industrial activities. In recent times, these areas have been occupied by the humans and have been converted into settlements and dairy farms.

Tropical Biome: This includes the rain forests of the equatorial region and the tropical deciduous forests. The tropical rain forests are found in the Amazon and the Congo valleys, East Indies, India and Myanmar. In the equatorial regions of high temperature and high rains, there is profuse tree growth. These supply oxygen to the atmosphere in large quantities. In these forests, there are trees, bushy plants, creepers, parasites and epiphytes and hundreds of thousands of other species.

The vegetation is organised in ways suitable to high temperature and heavy rainfall of the region. To get at the sunshine, the trees grow tall. To help with high evapotranspiration, the leaves are broad and with wider pores. The stems of the trees are propped up by the aerial roots.

As the tropical rain forests are thick, there are marshes. The reptiles and the other animals show characteristics typical of the environments. And as it is difficult to move about through the thick forests, large animals live at the edges of these forests. In the thick forests, there are innumerable insects and furless animals. Further, they live on the leaves and fruits of the forests. For example, the gorillas and the monkeys and the leopard that live on these are found in the mangroves.

In the islands of Malaysia and the Philippines of the East Indies, these forests have been cleared and plantation crops are grown. Rubber in Malaysia and cocoa in Africa and South America are grown in these areas.