The Planetary System and The Solar System 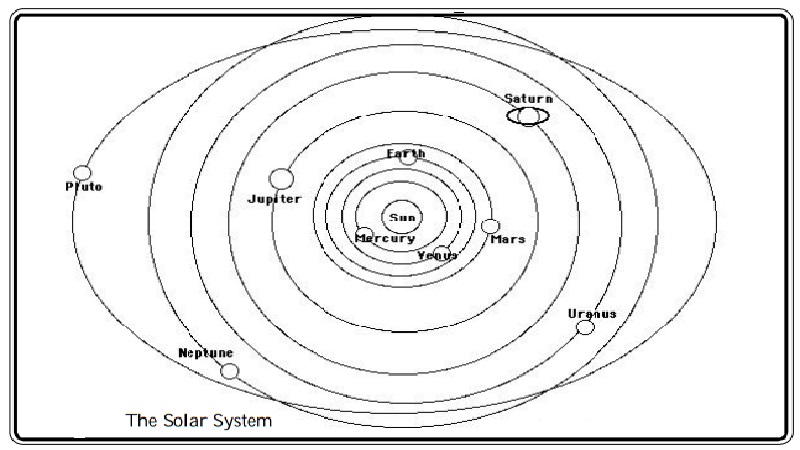 All these planets revolve around the Sun on their own axes. Every planet has its own elements and mechanisms irrespective of their size. Mercury, Venus, Earth, and Mars are smaller in size. They have large amounts of rocks and smaller amounts of gases. Hence, these planets are called rocky planets. Jupiter, Saturn, Uranus and Neptune are bigger in size. They have small amounts of rocks and large amounts of gases, and are called Gaseous Planets.The lastly positioned Pluto is the smallest planet of the planetary system. Pluto is an asteroid, captured by the Sun's gravity and brought into the orbital path of the planetary system. The prevailing temperature (-2100C)on Pluto freezes the gases into solid. So Pluto is called, a Snow Ball. This planetary system is maintained by the Sun. This system is a subsystem of the Solar System (Fig.No.2.2).

The Sun is the main source of energy for the planetary system. The Sun is a mixture of gases. It consists of 92% hydrogen, 7.8% helium and 0.2% other gases. The temperature on the surface of the Sun is 6,000 degrees Celsius and the temperature at the center of the Sun is more than 15,000,000 degree Celsius. The Sun shines as a consequence of the fusion of hydrogen into helium, which is constantly taking place in its core. Hence, astronomers call the Sun a 'Big Fire Ball'.

Scientists believe that the Sun will cease its function when the hydrogen is exhausted. If so, how long it can burn? It can burn for another 5,000 million years. It is estimated that the Sun had enough hydrogen to burn for 10,000 million years. It has burnt already for 5,000 million years. So, now it is literally a middle-aged star. The Sun and its components namely the planets, form the Solar System. This Solar System is a subsystem of the Universe (Fig No. 2.3). The Universe consists of millions and millions of galaxies. Our Solar System is part of one such galaxy known as the Milky Way. Thus Universe is considered as a general system that consists of many subsystems.

So far we learnt that the Earth is a system and has components. These components interact with each other and create the Earth's environment. But how do we know about the Earth's components and its interactions ? Are there any operating manuals / pamphlets like the ones

we get when we buy electrical / electronic goods? These manuals / pamphlets contain information about how to operate the system and also its functions. But for our Earth system, there is no such operating manuals. Only through science and technological research activities, we come to know about how Earth operates and how its components functions. In the next lesson, let us learn about the lithosphere, a component of the Earth.