Major Components of an Ecosystem and Ecosystem Types 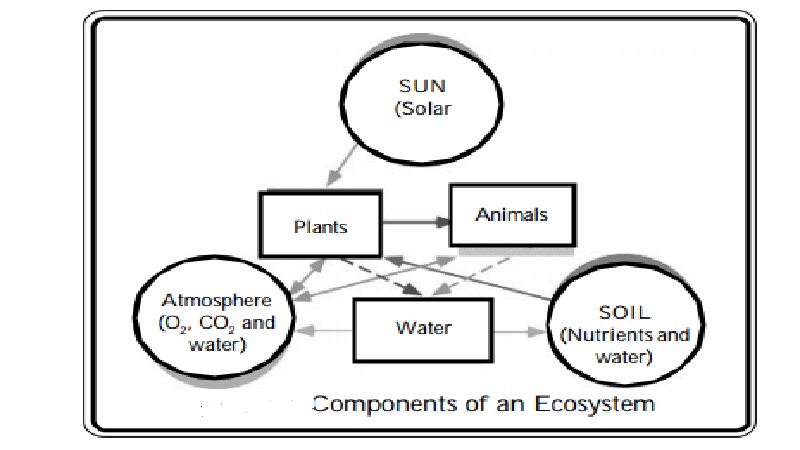 Ecosystems are composed of a variety of abiotic and biotic components and they function in an interrelated fashion. Some of the important components are : Soil, atmosphere, radiation from the sun, water, and living organisms.

Major Components of an Ecosystem

Ecosystems are composed of a variety of abiotic and biotic components and they function in an interrelated fashion. Some of the important components are  : Soil, atmosphere, radiation from the sun, water, and living organisms.

Soils contain a mixture of weathered rock fragments, highly altered soil mineral particles, organic matter, and living organisms. Soils provide nutrients, water, a home, and a structural growing medium for organisms. The vegetation found growing on top of a soil is closely linked to this component of an ecosystem through nutrient cycling.

The atmosphere provides organisms found within ecosystems with carbon dioxide for photosynthesis and oxygen for respiration. The processes of evaporation, transpiration, and precipitation, cycles water between the atmosphere and the Earth's surface.

Solar radiation is used in ecosystems to heat the atmosphere and to evaporate and transpire water into the atmosphere. Sunlight is also necessary for photosynthesis. Photosynthesis provides the energy for plant growth and metabolism, and the organic food for other forms of life.

Most living tissue is composed of a very high percentage of water, up to and even exceeding 90%. The protoplasm of a very few cells can survive if their water content drops below 10%, and most are killed if it is less than 30 - 50%. Water is the medium by which mineral nutrients enter and are translocated in plants. It is also necessary for the maintenance of leaf turgidity and is required for photosynthetic chemical reactions. Plants and animals receive their water from the Earth's surface and soil. The original source of this water is precipitation from the atmosphere.

The ecological communities in the biosphere, interact with their environment and create a variety of ecosystems. These ecosystems fall into two groups : Water and Land.

The largest recognizable division of the natural ecosystem is the 'Biome'. Although the biome includes the assemblage of plant and animal life interacting within the biosphere, the green plants dominate the biome physically as compared with that of other organisms.

In geography, the concept of natural vegetation represented by biomes; and the vegetation sustained in a modified state by humanity are like the two sides of a coin. Natural vegetation can still be seen over vast areas of the wet equtorial climate where rainforests are scarcely touched by humans. Much of the Arctic Tundra and the needle leaf forest of the subarctic zones is in a natural state. In contrast, much of the continental surface in the middle latitudes is almost totally under human control through intensive agriculture, organizing or urbanization.

Humans have influenced vegetation by moving plant species from their indigenous habitats to foreign lands and foreign environments. The eucalyptus three is a good example. From Australia the various species of eucalyptus have been transplanted to such far-off lands as North America, North Africa and India.