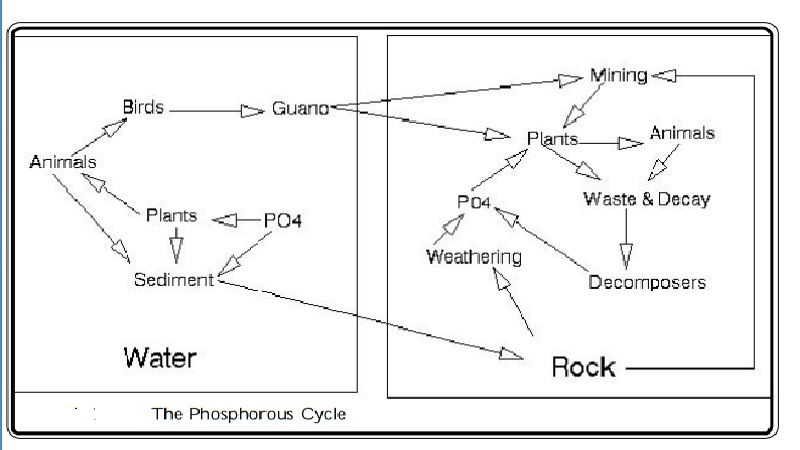 The phosphorous is the simplest of all cycles. Phosphorous has only one form, phosphate, which is a phosphorous atom with 4 oxygen atoms. This molecule never makes its way into the atmosphere, it is always part of an organism, dissolved in water, or in the form of rock.

It is an important constituent of cell membranes. Animals obtain their phosphorous from the plants they eat. Animals, by the way, may also use phosphorous as a component of bones, teeth and shells. When animals or plants die the phosphate may be returned to the soil or water by the decomposers. There, it can be taken up by another plant and used again. This cycle will occur over and over until at last the phosphorous is lost at the bottom of the deepest parts of the ocean, where it becomes part of the sedimentary rocks forming there. Ultimately, this phosphorous will be released if the rock is brought to the surface and weathered.

Two types of animals play a unique role in the phosphorous cycle. Humans often mine rock rich in phosphorous. For instance, in Florida, which was once sea floor, there are extensive Phosphate mines. The phosphate is then used as fertilizer. This mining of phosphate and use of the phosphate as fertilizer greatly accelerates the phosphorous cycle and may cause local overabundance of phosphorous, particularly in coastal regions, at the mouths of rivers, and any place where there is a lot of sewage released into the water. Local abundance of phosphate can cause overgrowth of algae in the water; the algae can use up all the oxygen in the water and kill other aquatic life. This is called eutrophication.

The other animals that play a unique role in the phosphorous cycle are marine birds. There birds take phosphorous containing fish out of the ocean and return to land, where they defecate. Their guano contains high levels of phosphorous and in this way marine birds return phosphorous from the ocean to the land. The guano is often mined and may form the basis of the economy in some areas.

In the biosphere, a group of organisms with their total assemblage of components entering into the interactions through biogeochemical cycles is known as an ecological system, or more simply an ecosystem. A.G. Tansely, a botanist, introduced the ecosystem concept in the year 1935.