The economic impact of the war was manifest in rising prices, shortage of food-grains and closure of war time industries causing retrenchment and employment.

The economic impact of the war was manifest in rising prices, shortage of food-grains and closure of war time industries causing retrenchment and employment. This merged with the anti-British sentiments evident in the mass scale of the protests revolving around the INA trials.

B.C. Dutt, a rating (the designation for the Indians employed in the various war-ships and elsewhere in the Royal Indian Navy) in the HMIS Talwar was arrested for scribbling ‘Quit India’ on the panel of the ship. This provoked a strike by the 1,100 ratings on the ship. The ratings resented the racist behaviour of the English commanders, the poor quality of the food and abuses that were the norm. Dutt’s arrest served as the trigger for the revolt on February 18, 1946. The day after, the revolt was joined by the ratings in the Fort Barracks and the Castle and a large number of them went into the Bombay cities in commandeered trucks waving Congress flags and shouting anti-British slogans. 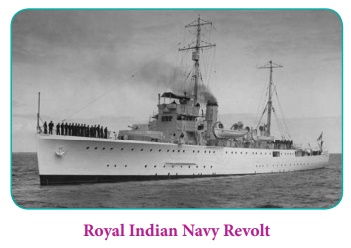 Soon, the workers in the textile mills of Bombay joined the struggle. The trade unions in Bombay and Calcutta called for a sympathy strike and the two cities turned into war zones. Barricades were erected all over and pitched battles fought. Shopkeepers downed shutters and hartals became the order of the day. Trains were stopped in the two cities with people sitting on the tracks. On news of the Bombay revolt reaching Karachi, ratings in the HMIS Hindustan and other naval establishments in Karachi went on a lightning strike on February 19. The strike wave spread to almost all the naval establishments across India and at least 20,000 ratings from 78 ships and 20 shore establishments ended up revolting in the days after February 18, 1946. There were strikes, expressing support to the ratings in the Royal Indian Air Force stationed in Bombay, Poona, Calcutta, Jessore and Ambala units. The Sepoys in the army cantonment station at Jabalpur too went on strike.

The ratings, in many places, hoisted the Congress, the Communist, and the Muslim League flags together on the ship masts during the revolt.

The colonial government’s response was brutal repression. It was, indeed, a revolt without a leadership; nor did the ratings move in an organised direction. While the trade unions came out in solidarity with the ratings in no time and the strikes in Bombay and Calcutta and Madras were strong expressions against British rule in India, these did not last for long and the ratings were forced to surrender soon.

Sardar Vallabhai Patel, then in Bombay, took the initiative to bring the revolt to an end. The RIN mutiny, however, was indeed a glorious chapter in the Indian National Movement and perhaps the last act of rebellion in the long story of such acts of valour in the cause of independence.

The March 23, 1940 resolution read as follows: ‘That geographically contiguous units are demarcated into regions which should be so constituted, with such territorial readjustments as may be necessary, that the areas in which the Muslims are numerically in a majority as in the north-western and eastern zones of India should be grouped to constitute “Independent States”, in which the constituent units shall be autonomous and sovereign.’ (Source: Sumit Sarkar Modern India 1885-1947, Pearson, 2018,)