A considerably large contingent of the Indian Army was posted on the South East Asian countries that were part of the British Empire. 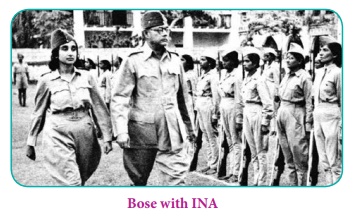 A considerably large contingent of the Indian Army was posted on the South East Asian countries that were part of the British Empire. They were in Malaya, Burma and elsewhere. The forces, however, could not stand up to the Japanese army. The command of the British Indian Army in the South-East Asian front simply retreated leaving the ranks behind as Prisoners of War (POWs).

Mohan Singh, an officer of the British Indian Army in Malaya, approached the Japanese for help and they found in this an opportunity. Japan’s interests lay in colonising China and not much India. The Indian POWs with the Japanese were left under Mohan Singh’s command. The fall of Singapore to the Japanese forces added to the strength of the POWs and Mohan Singh now had 45,000 POWs under his command. Of these, Mohan Singh had drafted about 40,000 men in the Indian National Army by the end of 1942. Indians in the region saw the INA as saviours against Japanese expansionism as much as the commander and other officers held out that the army would march into India but only on invitation from the Indian National Congress.

After the Indian National Congress acted against Bose in August 1939, shunting him out of all offices including as president of the Bengal Congress Committee, Bose embarked upon a campaign trail, to mobilise support to his position, across India. He was arrested by the British on July 3, 1940 under the Defence of India Act. and kept under constant surveillance. As the war progressed in Europe Bose believed that Germany was going to win. He began to nurture the idea that Indian independence could be achieved by joining hands with the Axis powers. In the midnight of January 16-17, 1941, Bose slipped out of Calcutta, and reached Berlin by the end of March, travelling through Kabul and the Soviet Union on an Italian passport. Bose met Hitler and Goebbels in Berlin. Both the Nazi leaders were cold and the only concession they gave was to set up the Azad Hind Radio. Nothing more came out of his rendezvous with Hitler and his aides. With Germany facing reverses, Bose found his way to Singapore in July 1943

Bose enlisted civilians too into the INA and one of the regiments was made up of women. The Rani of Jhansi regiment of the INA was commanded by a medical doctor and daughter of freedom fighter Ammu Swaminathan from Madras, Dr Lakshmi. On July 6, 1944, Subhas Chandra Bose addressed a message to Gandhi over the Azad Hind Radio from Rangoon. Calling him the ‘Father of the Nation’, Bose appealed to Gandhi for his blessing in what he described as ‘India’s last war of independence.’

INA with Axis Powers in War

A battalion of the INA commanded by Shah Nawaz accompanied the Japanese army, in its march on Imphal. This was in late 1944 and the Axis powers, including the Japanese forces, had fallen into bad times all over. The Imphal campaign did not succeed and the Japanese retreated before the final surrender to the British command in mid-1945. Shah Nawaz and his soldiers of the INA were taken prisoners and charged with treason.

The INA trials were held at the Red Fort in New Delhi. The Indian National Congress fielded its best lawyers in defence of the INA soldiers. Nehru, who had given up his legal practice as early as in 1920 responding to Gandhi’s call for non-cooperation, wore his black gown to appear in defence. Even though the INA did not achieve much militarily, the trials made a huge impact in inspiring the masses. 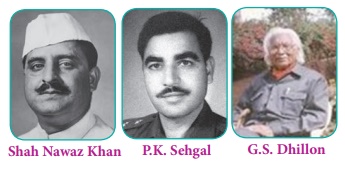 The colonial government’s arrogance once again set the stage for another mass mobilisation. The Indian National Congress, after the debacle at the Simla Conference (June 25 and July 14, 1945) plunged into reaching out to the masses by way of public meetings across the country. The INA figured more prominently as an issue in all these meetings than even the Congress’s pitch for votes in the elections (under the 1935 Act) that were expected soon.

It was in this context that the colonial rulers sent up three prominent officers of the INA – Shah Nawaz Khan, P.K. Sehgal and G.S. Dhillon – to trial. The press in India reported the trials with all empathy and editorials sought the soldiers freed immediately. The INA week was marked by processions, hartals and even general strikes across the nation demanding release of the soldiers.

The choice of the three men to be sent up for trial ended up rallying all political opinion behind the campaign. The Muslim League, the Shiromani Akali Dal and the Hindu Maha Sabha, all those who had stayed clear of the Quit India campaign, joined the protests and raised funds for their defence. Although the trial court found Sehgal, Dhillon and Shah Nawaz Khan guilty of treason, the commander in chief remitted the sentences and set them free on January 6, 1946. The INA trials, indeed, set the stage for yet another important stage in the history of the Indian National Movement in February 1946. The ratings of the Royal Indian Navy (RIN) raised the banner of revolt.