The year 1941 was bad for the allied forces. France, Poland, Belgium, Norway and Holland had fallen to Germany and Great Britain was facing destruction as well.

The year 1941 was bad for the allied forces. France, Poland, Belgium, Norway and Holland had fallen to Germany and Great Britain was facing destruction as well. Of far more significance to India was Japan’s march into South-east Asia. This was happening alongside the attack on Pearl Harbour, where Japanese war-planes bombed the American port on December 7, 1941. US President F.D. Roosevelt and Chinese President Chiang Kai-Shek were concerned with halting Japan on its march. India, thus, came on their radar and the two put pressure on British Prime Minister, Churchill to ensure cooperation for the war from the Indian people.

By the end of 1941, the Japanese forces had stormed through the Philippines, Indo-China, Indonesia, Malaysia and Burma and were waiting to knock at India’s doors in the North- East. The way the South East Asian region fell raised concerns to Britain and the Indian National Congress. The British forces ran without offering any resistance. The Indian soldiers of the British Indian Army were left to the mercy of the Japanese forces. It was from among them that what would later on to become the Indian National Army (INA) would be raised. We will study that in detail in this lesson (in Section 7.3). Churchill was worried that Calcutta and Madras might fall in Japanese hands. Similar thoughts ran in the minds of the leaders of the Congress too and they too were desperate to seek an honourable way out to offer cooperation in the war effort.

It was in this situation that the Congress Working Committee, in December 1941, passed a resolution offering cooperation with the war effort on condition that Britain promised independence to India after the war and transfer power to Indians in a substantial sense immediately.

A delegation headed by Sir Stafford Cripps reached India in March 1942. That Cripps, a Labour party representative in the War cabinet under Churchill, was chosen to head the delegation lent credibility to the mission. Before setting out to India, he announced that British policy in India aimed at ‘the earliest possible realisation of self-government in India’. But the draft declaration he presented before he began negotiations fell far short of independence.

Cripps promised Dominion Status and constitution-making body after the war.The constitution-making body was to be partly elected by the provincial assemblies and nominated members from the Princely states. The draft also spelt out the prospect of Pakistan. It said that any province that was not prepared to accept the new constitution would have the right to enter into a separate agreement with Britain regarding its future status. The draft did not contain anything new. Nehru recalled later: ‘When I read these proposals for the first time I was profoundly depressed.’ 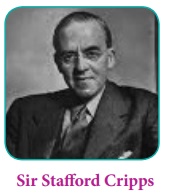 The offer of Dominion Status was too little. The Congress also rejected the idea of nominated members to the constitution-making body and sought elections in the Princely States as in the Provinces. Above all these was the possibility of partition. The negotiations were bound to breakdown and it did.

Options for Congress in the wake of Pearl Harbour Attack

Churchill’s attitude towards the Indian National Movement for independence in general and Gandhi in particular was one of contempt even earlier. Churchill did not change even when Britain needed cooperation in the war efforts so desperately. But he came under pressure from the US and China.

The Indian National Congress, meanwhile, was pushed against the wall. This happened in two ways: the colonial government’s adamant stand against any assurance of independence on the one hand and Subhas Chandra Bose’s campaign to join hands with the Axis powers in the fight for independence. Bose had addressed the people of India on the Azad Hind Radio broadcast from Germany in March 1942. This was the context in which Gandhi thought of the Quit India movement.