Rajaji Proposals and the Wavell Plan

Meanwhile, the communal challenge persisted and the Muslim League pressed with its demand for a separate nation.

Rajaji Proposals and the Wavell Plan

Demand for a Separate Nation

Meanwhile, the communal challenge persisted and the Muslim League pressed with its demand for a separate nation. The Lahore resolution of the Muslim League in March 1940 had altered the discourse from the Muslims being a ‘minority’ to the Muslims constituting a ‘nation’. Mohammed Ali Jinnah was asserting this right as the sole spokesperson of the community.

In April 1944, when the Congress leaders were in jail, C.Rajaji put out a proposal to resolve the issue. It contained the following:

·        A post-war commission to be formed to demarcate the contiguous districts where the Muslims were in absolute majority and a plebiscite of the adult population there to ascertain whether they would prefer Pakistan;

·        In case of a partition there would be a mutual agreement to run certain essential services, like defence or communication;

·        The border districts could choose to join either of the two sovereign states;

·        The implementation of the scheme would wait till after full transfer of power. 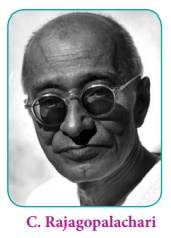 After his release from prison, Gandhi, in July 1944, proposed talks with Jinnah based on what came to be the ‘Rajaji formula’. The talks did not go anywhere.

In June 1945 Lord Wavell moved negotiate and called for the Simla conference. The rest of Congress leaders, including Jawaharlal Nehru, Sardar Patel and the Congress president, Maulana Abul Kalam Azad were released from jail for this. Wavell had set out on this project in March 1945 and sailed to London. There he convinced Churchill of the imperative for a Congress–Muslim League coalition government as a way to deal with the post-war political crisis. 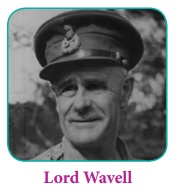 The Viceroy’s proposal before the leaders of all political formations and most prominently the Congress and the Muslim League was setting up of an Executive Council, exclusively with Indians along with himself and the commander-in-chief; equal number of representatives in the council for the caste Hindus and the Muslims and separate representation for the Scheduled Castes; and start of discussions for a new constitution.

The proposal displeased everyone. The Simla Conference held between June 25 and July 14, 1945 ended without resolution. The talks broke down on the right of the Indian National Congress and the Muslim League to nominate members to the Viceroy’s Council. 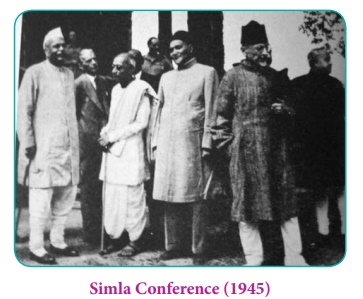 The Muslim League insisted on its exclusive right to nominate Muslim members to the Council. Its demand was that the Congress nominees shall only be caste Hindus and that the Indian National Congress should not nominate a Muslim or a member from the Scheduled Caste! This was seen as a means to further the divide on communal lines and deny the Congress the status of representing the Indian people. Lord Wavell found a council without Muslim League representation as unworkable and thus abandoned the Simla talks.

The years between the Lahore resolution of 1940 and the Simla Conference in 1945 marked the consolidation of a Muslim national identity and the emergence of Jinnah as its sole spokesperson. It was at a convention of Muslim League Legislators in Delhi in April 1946, that Pakistan was defined as a ‘sovereign independent state’. For the first time the League also declared its composition in geographical terms as ‘the region consisting of the Muslim majority provinces of Bengal and Assam in the Northeast and the Punjab, North-West Frontier Province, Sind and Baluchistan in the Northwest. The Congress president Maulana Abul Kalam Azad rejected this idea and held that the Congress stood for a united India with complete independence.

All these were developments after the Simla conference of June–July 1945 and after Churchill was voted out and replaced by a Labour Party government headed by Clement Attlee. Times had changed in a substantial sense. British Prime Minister, Attlee had declared the certainty of independence to India with only the terms left to be decided.