Discuss the respiratory, circulatory, and digestive changes that occur in the newborn at the time of birth.

The newborn, or neonate (nē′ ō-nāt; newborn), experiences several dramatic changes at the time of birth. The major and earliest changes are the separation of the infant from the maternal circula-tion and the transfer from a fluid to a gaseous environment.

The large, forced gasps of air that occur when an infant cries at the time of delivery help inflate the lungs. The fetal lungs produce a substance called surfactant (ser-fak′ tănt), which coats the inner surface of the alveoli, reduces surface tension in the lungs, and allows the newborn lungs to inflate .

Surfactant is not manufactured in the fetal lungs before about 6 months after fertilization. If a fetus is born before the lungs can produce surfactant, the surface tension inside the lungs is too great for the lungs to inflate. Under these conditions, the newborn may die of respiratory distress. Therefore, premature newborns are treated with bovine or synthetic surfactant. 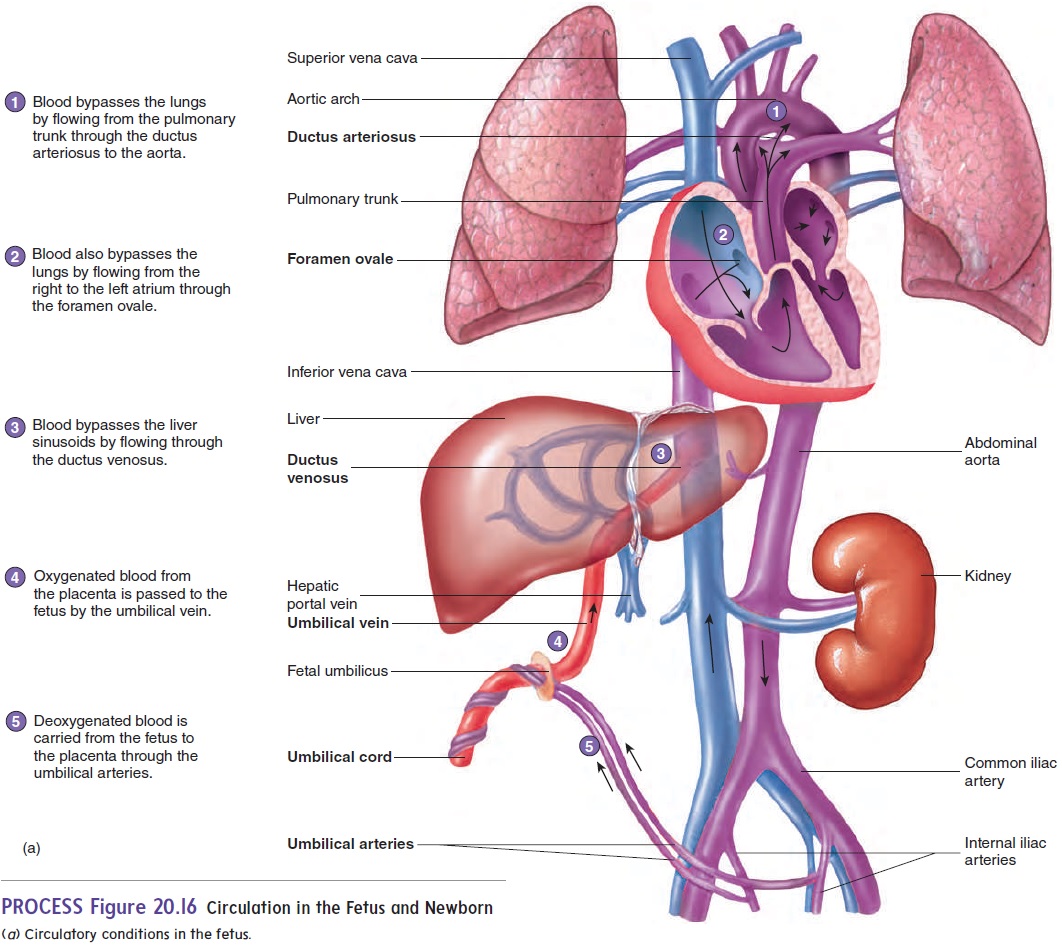 This action completes the separation of the heart into two pumps: the right side and the left side of the heart.

After birth, the neonate is suddenly separated from its source of nutrients, the maternal circulation. Because of this separationand the shock of birth, the neonate usually loses 5–10% of its total body weight during the first few days of life. Although the digestive system of the fetus becomes somewhat functional late in development, it is still very immature in comparison to that of the adult and can digest only a limited number of food types. The newborn digestive system is capable of digesting lactose (milk sugar) from the time of birth. The pancreatic secretions are suffi-ciently mature for a milk diet, but the digestive system only gradu-ally develops the ability to digest more solid foods over the first year or two. New foods should therefore be introduced gradually during the first 2 years. Parents are also advised to introduce only one new food at a time, so that, if an allergic reaction occurs, the cause is more easily determined.

Amylase secretion by the salivary glands and the pancreas remains low until after the first year. Lactase activity in the small intestine is high at birth but declines during infancy, although the levels still exceed those in adults. In many adults, lactase activity is lost, and an intolerance to milk develops.