Explain the events that occur during parturition.

Physicians usually calculate the gestation (jes-tā′ shŭn) period (length of pregnancy) as 280 days (40 weeks, or 10 lunar months) from the LMP to the date of delivery of the fetus. Parturition (par-toor-ish′ ŭn) is the process by which the baby is born (figure 20.14). Near the end of pregnancy, the uterus becomes progressively more excitable and usually exhibits occasional contractions that become stronger and more frequent until parturition is initiated. The cervix gradually dilates, and strong uterine contractions help expel the fetus from the uterus through the vagina.

Labor is the period during which uterine contractions occurthat result in expulsion of the fetus. Although labor may differ greatly from woman to woman and from one pregnancy to another for the same woman, it can usually be divided into three stages.

1.         The first stage of labor, often called the dilation phase, begins with the onset of regular uterine contractions and extends until the cervix dilates to a diameter about the size of the fetus’s head (10 cm) (figure 20.14). This stage takes approximately 24 hours, but it may be as short as a few minutes in some women who have had more than one child. During this phase, the amnion surrounding the fetus ruptures, and amniotic fluid flows through the vagina to the exterior. This event is commonly referred to as the “water breaking” and usually occurs naturally, but the amnion may need to be ruptured artificially.

2.         The second stage of labor, often called the expulsion phase, lasts from the time of maximum cervical dilation until the time the baby exits the vagina. This stage may last from1 minute to 1 hour or more. During this stage, contraction of the woman’s abdominal muscles assists the uterine contractions.

During the 4 or 5 weeks following parturition, the uterus becomes much smaller, but it remains somewhat larger than it was before pregnancy. A vaginal discharge composed of small amounts of blood and degenerating endometrium can persist for several weeks after parturition. 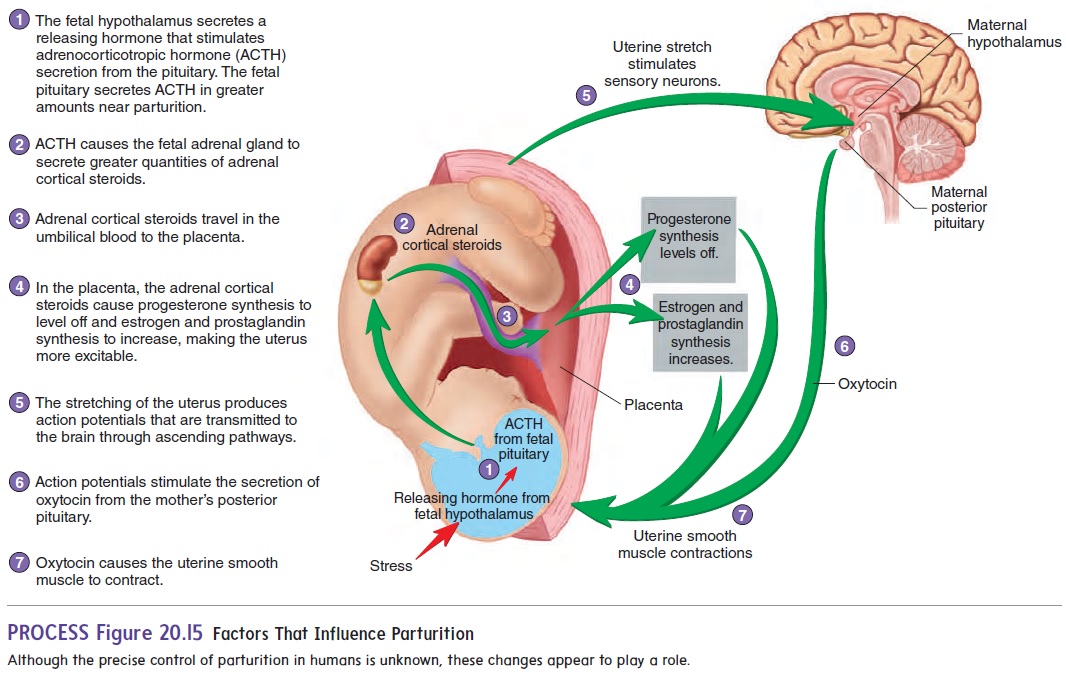 The precise signal that triggers parturition is unknown, but many factors that support it have been identified (figure 20.15).

The fetus also plays a role in stimulating parturition. Stress on the fetus triggers the secretion of a releasing hormone from the fetal hypothalamus, which in turn causes adrenocorticotropic hormone (ACTH) to be released from the fetal anterior pituitary. ACTH stimulates the fetal adrenal gland to secrete hormones from the adrenal cortex that reduce progesterone secretion, increase estrogen secretion, and increase prostaglandin production by the placenta. Prostaglandins strongly stimulate uterine contractions.

During parturition, stretching of the uterine cervix initiates nervous reflexes that cause the mother’s posterior pituitary gland to release oxytocin. Oxytocin stimulates uterine contractions, which move the fetus farther into the cervix, causing further stretch. A positive-feedback mechanism is established. This positive-feedback mechanism stops after delivery, when the cervix is no longer stretched.