A. Define genetics, and explain how chromosomes are related to inheritance. B. Describe the major types of inheritance.

Genetics is the study of heredity—that is, the characteristics chil-dren inherit from their parents. Many of a person’s characteristics, including specific abilities, susceptibility to certain diseases, and even lifespan, are influenced by heredity. The functional units of heredity are genes, which are carried on chromosomes. 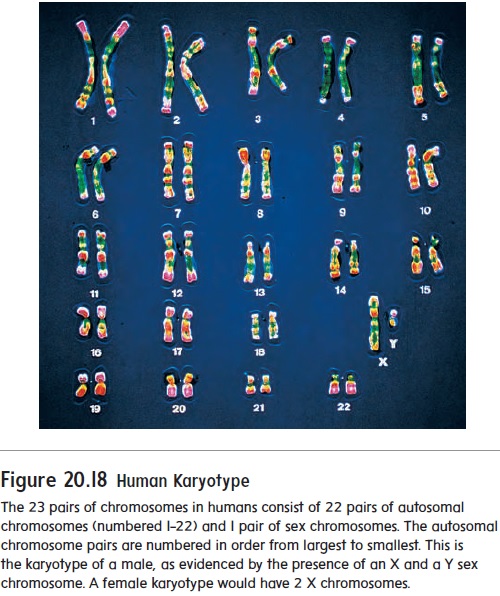 Gametes are produced by meiosis (mı̄-ō′ sis) . Meiosis is called a reduction division because it produces gametesthat have half the number of chromosomes that somatic cells have. When a sperm cell and a secondary oocyte fuse during fertilization, each contributes one-half of the chromosomes nec-essary to produce new somatic cells. Therefore, half of an indi-vidual’s genetic makeup comes from the father, and half comes from the mother. 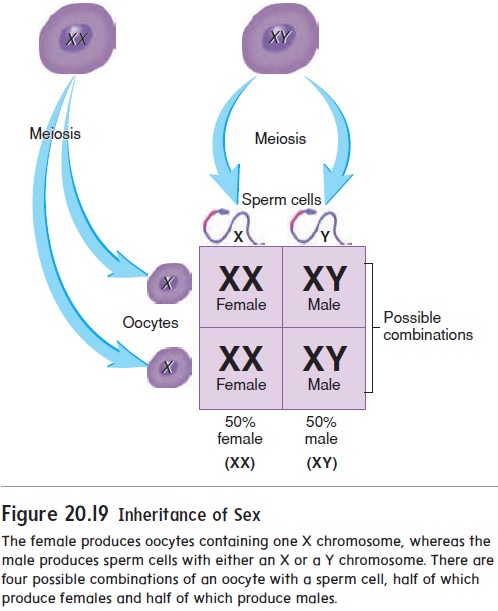 Each chromosome contains thousands of genes. Each gene con-sists of a certain portion of a DNA molecule, but not necessarily a continuous stretch of DNA.

Genes determine the proteins in a cell. Both chromosomes of a given pair contain similar but not necessarily identical genes. Similar genes on homologous chro-mosomes are called alleles (ă-lēlz′ ). If the two allelic genes are identical, the person is homozygous (hō-mō-zı̄′ gŭs) for the trait specified by that gene. If the two alleles are slightly different, the person isheterozygous (het′ er-ō-zı̄′ gŭs) for the trait. All the genes in one homologous set of 23 chromosomes in one individual con-stitute that person’s genome (jē′ nōm).

Through the processes of meiosis, gamete formation, and fertilization, the distribution of genes received from each parent is essentially random. This random distribution is influenced by sev-eral factors, however. First, all the genes on a given chromosome are linked; that is, they tend to be inherited as a set rather than as individual genes because chromosomes, not individual genes, segregate during meiosis. Second, homologous chromosomes may exchange genetic information during meiosis by crossing over.

Segregation errors may occur during meiosis. As the chro-mosomes separate, the two members of a homologous pair may not segregate. As a result, one of the daughter cells receives both chromosomes of a given pair, and the other daughter cell receives none. When the gametes are fertilized, the resulting zygote has either 47 chromosomes or 45 chromosomes, rather than the normal 46. When this condition results in an abnormal autosomal chromo-some number, it is usually, but not always, lethal and is one reason for a high rate of early embryo loss. Down syndrome, or trisomy 21, which results when there are three #21 chromosomes, is one of the few autosomal trisomies that is not lethal. In contrast, sex chromo-some abnormalities are not usually lethal. For example, TurnerSyndrome ormonosomy X,in which only one X chromosome ispresent, results in sterility and abnormal sexual development but does not affect the mental development of the female.

Most human genetic traits are recognized because defective alleles for those traits exist in the population. For example, on chromo-some 11 is a gene that produces an enzyme necessary for the synthesis of melanin, the pigment responsible for skin, hair, and eye color . An abnormal allele, however, produces a defective enzyme not capable of catalyzing one of the steps in melanin synthesis. If a given person inherits two defective alleles, a homozygous condition, the person is unable to produce melanin and therefore lacks normal pigment. This condition is referred to as albinism (al′ bi-nizm).

For many genetic traits, the effects of one allele for that trait can mask the effect of another allele for the same trait. For example, a person who is heterozygous for the melanin-producing enzyme gene has one normal gene for melanin production and one defective gene for melanin production. One copy of the gene and its resulting enzymes are enough to make normal melanin. As a result, the person who is heterozygous produces melanin and appears normal. In this case, the allele that produces the normal enzyme is said to be dominant, whereas the allele producing the abnormal enzyme is recessive. By convention, dominant traits are indicated by uppercase letters, and recessive traits are indicated by lowercase letters. In this example, the letter A designates the domi-nant normal, pigmented allele, the letter a the recessive abnormal allele. Not all dominant traits are the normal condition, and not all recessive traits are abnormal. Many examples exist of abnormaldominant traits. For example,Huntington disease, a degenerative neurological disease, is caused by an abnormal dominant gene.

The possible combinations of dominant and recessive alleles for normal melanin production versus albinism are AA (homo-zygous dominant, normal), Aa (heterozygous, normal), and aa (homozygous recessive, albino). The combination of alleles a person has for a given trait is called the genotype (jen′ ō-tı̄p). The person’s appearance is called the phenotype (fē′ nō-tı̄p). A person with the genotype AA or Aa has the phenotype of normal pigmen-tation, whereas a person with the genotype aa has the phenotype of albinism. The recessive trait is expressed only when no allele for the dominant trait is present. A carrier is a heterozygous person with an abnormal recessive gene but a normal phenotype because the normal dominant allele for that gene is also present. 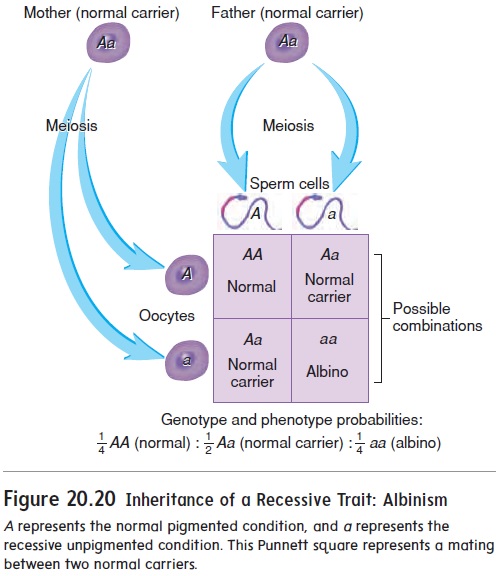 Traits affected by genes on the sex chromosomes are called sex-linked traits. Most sex-linked traits are X-linked; that is,they are on the X chromosome. Only a few Y-linked traits exist, largely because the Y chromosome is very small. An example of an X-linked trait is hemophilia A (classic hemophilia), in which the person is unable to produce one of the clotting factors . Consequently, clotting is impaired, and persistent bleeding can occur, either spontaneously or as a result of an injury. Hemophilia A is a recessive trait, and the allele for the trait is located on the X chromosome. The possible genotypes and phe-notypes are therefore 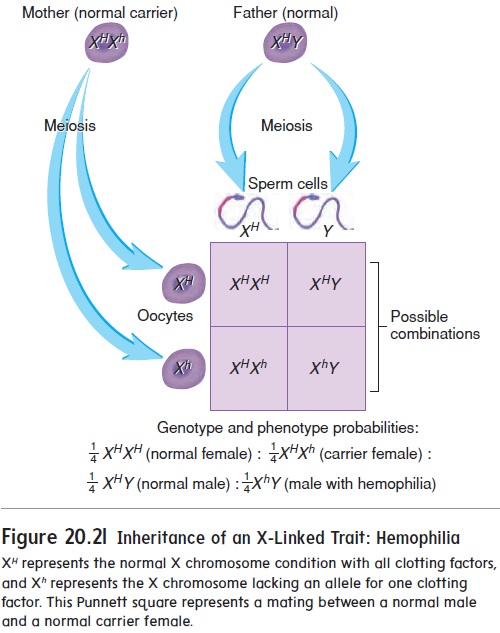 Other Types of Gene Expression

In another type of gene expression, called codominance (kō-dom′ i-năns), two alleles can combine to produce an effect without either of them being dominant or recessive. For example, a person with type AB blood has A antigens and B antigens on the surface of his or her red blood cells . The antigens result from a gene that causes the production of the A antigen and a different gene that causes the production of the B antigen, and neither gene is dominant or recessive in relation to the other.

Many traits, called polygenic (pol-ē-jen′ ik) traits, are deter-mined by the expression of multiple genes on different chromo-somes. Examples are height, intelligence, eye color, and skin color. Polygenic traits typically have a great amount of variability. For example, there are many shades of eye color and skin color (figure 20.22).

Genetic disorders are caused by abnormalities in a person’s geneticmakeup—that is, in his or her DNA. They may involve a single gene or an entire chromosome. Some genetic disorders result from a mutation (mū-tā′ shŭn; to change), a change in a gene that usu-ally involves a change in the nucleotides composing the DNA . Mutations occur by chance or can be caused by chemicals, radiation, or viruses. If mutations occur in reproductive cells, abnormal traits resulting from these mutations can be passed from one generation to the next.

The importance of genes is dramatically illustrated by situa-tions in which the alteration of a single gene results in a genetic disorder. For example, in phenylketonuria(fen′ il-kē′ tō-nū′ rē-ă) (PKU), the gene responsible for producing an enzyme that convertsthe amino acid phenylalanine to the amino acid tyrosine is defective. Therefore, phenylalanine accumulates in the blood and is eventually converted to harmful substances that can cause mental retardation. 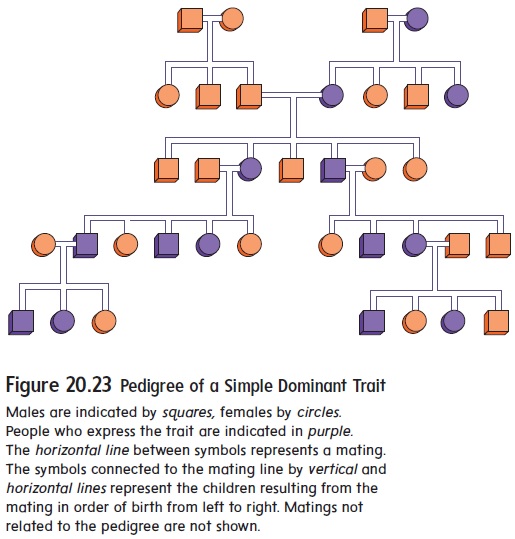 The first step in genetic counseling is to attempt to deter-mine the genotype of the individuals involved. A family tree, or pedigree, provides historical information about family members.Figure 20.23 shows the pedigree for a simple dominant trait, such as Huntington disease, a neurological disorder. Sometimes, knowing the phenotypes of relatives makes it possible to determine a person’s genotype. As part of the process of collecting informa-tion, a karyotype can be prepared. For some genetic disorders, the amount of a given substance, such as an enzyme, produced by a carrier can be tested. For example, carriers for cystic fibrosis pro-duce more salt in their sweat than is normal.