1 Use of Lex 2 Structure of Lex Programs 3 Conflict Resolution in Lex 4 The Lookahead Operator 5 Exercises for Section 3.5

In this section, we introduce a tool called Lex, or in a more recent implemen-tation Flex, that allows one to specify a lexical analyzer by specifying regular expressions to describe patterns for tokens. The input notation for the Lex tool is referred to as the Lex language and the tool itself is the Lex compiler. Behind the scenes, the Lex compiler transforms the input patterns into a transition diagram and generates code, in a file called l e x . y y . c, that simulates this tran-sition diagram. The mechanics of how this translation from regular expressions to transition diagrams occurs is the subject of the next sections; here we only learn the Lex language.

Figure 3.22 suggests how Lex is used. An input file, which we call l e x . l , is written in the Lex language and describes the lexical analyzer to be generated. The Lex compiler transforms l e x . 1 to a C program, in a file that is always named l e x . y y . c. The latter file is compiled by the C compiler into a file called a . o u t , as always. The C-compiler output is a working lexical analyzer that can take a stream of input characters and produce a stream of tokens.

The normal use of the compiled C program, referred to as a. out in Fig. 3.22, is as a subroutine of the parser. It is a C function that returns an integer, which is a code for one of the possible token names. The attribute value, whether it be another numeric code, a pointer to the symbol table, or nothing, is placed in a global variable y y l v a l , 2 which is shared between the lexical analyzer and parser, thereby making it simple to return both the name and an attribute value of a token. 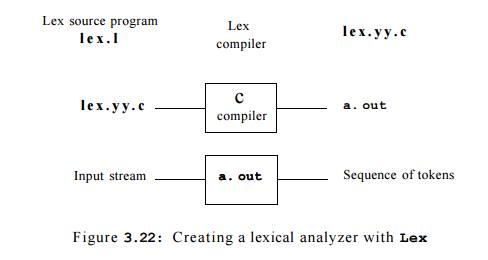 A Lex program has the following form:

The declarations section includes declarations of variables, manifest constants (identifiers declared to stand for a constant, e.g., the name of a token), and regular definitions, in the style of Section 3.3.4.

The translation rules each have the form

Each pattern is a regular expression, which may use the regular definitions of the declaration section. The actions are fragments of code, typically written in C, although many variants of Lex using other languages have been created.

The third section holds whatever additional functions are used in the actions. Alternatively, these functions can be compiled separately and loaded with the lexical analyzer.

Example 3.11 : Figure 3.23 is a Lex program that recognizes the tokens of Fig. 3.12 and returns the token found. A few observations about this code will introduce us to many of the important features of Lex.

Also in the declarations section is a sequence of regular definitions. These use the extended notation for regular expressions described in Section 3.3.5. Regular definitions that are used in later definitions or in the patterns of the translation rules are surrounded by curly braces. Thus, for instance, delim is defined to be a shorthand for the character class consisting of the blank, the tab, and the newline; the latter two are represented, as in all UNIX commands, by backslash followed by t or n, respectively. Then, ws is defined to be one or more delimiters, by the regular expression {delim}+.

In the auxiliary-function section, we see two such functions, install l D ( ) and install Num O . Like the portion of the declaration section that appears between °/0{. . . % } , everything in the auxiliary section is copied directly to file l e x . y y . c , but may be used in the actions.

Finally, let us examine some of the patterns and rules in the middle section of Fig. 3.23. First, ws, an identifier declared in the first section, has an associated empty action. If we find whitespace, we do not return to the parser, but look for another lexeme. The second token has the simple regular expression pattern if. Should we see the two letters if on the input, and they are not followed by another letter or digit (which would cause the lexical analyzer to find a longer prefix of the input matching the pattern for id), then the lexical analyzer consumes these two letters from the input and returns the token name IF, that is, the integer for which the manifest constant IF stands. Keywords then and else are treated similarly.

The fifth token has the pattern defined by id. Note that, although keywords like if match this pattern as well as an earlier pattern, Lex chooses whichever

int installlDQ {/* function to install the lexeme, whose first character is pointed to by yytext, arid whose length is yyleng, into the symbol table and return a pointer thereto */

pattern is listed first in situations where the longest matching prefix matches two or more patterns. The action taken when id is matched is threefold:

1. Function install l D ( ) is called to place the lexeme found in the symbol table.

2. This function returns a pointer to the symbol table, which is placed in

global variable y y l v a l , where it can be used by the parser or a later

component of the compiler. Note that instal l l D ( ) has available to it

two variables that are set automatically by the lexical analyzer that Lex generates:

• y y text is a pointer to the beginning of the lexeme, analogous to lexemeBegin in Fig. 3.3.

• yyleng is the length of the lexeme found.

The token name ID is returned to the parser.

The action taken when a lexeme matching the pattern number is similar, using the auxiliary function instal l N u m O . •

We have alluded to the two rules that Lex uses to decide on the proper lexeme to select, when several prefixes of the input match one or more patterns:

Always prefer a longer prefix to a shorter prefix.

If the longest possible prefix matches two or more patterns, prefer the pattern listed first in the Lex program.

Example 3 . 1 2 : The first rule tells us to continue reading letters and digits to find the longest prefix of these characters to group as an identifier. It also tells us to treat <= as a single lexeme, rather than selecting < as one lexeme and = as the next lexeme. The second rule makes keywords reserved, if we list the keywords before id in the program. For instance, if t h e n is determined to be the longest prefix of the input that matches any pattern, and the pattern then precedes { i d } , as it does in Fig. 3.23, then the token THEN is returned, rather than ID. •

Lex automatically reads one character ahead of the last character that forms the selected lexeme, and then retracts the input so only the lexeme itself is consumed from the input. However, sometimes, we want a certain pattern to be matched to the input only when it is followed by a certain other characters. If so, we may use the slash in a pattern to indicate the end of the part of the pattern that matches the lexeme. What follows / is additional pattern that must be matched before we can decide that the token in question was seen, but what matches this second pattern is not part of the lexeme.

E x a m p l e 3 . 1 3 : In Fortran and some other languages, keywords are not re-served. That situation creates problems, such as a statement

where IF is the name of an array, not a keyword. This statement contrasts with statements of the form

where IF is a keyword. Fortunately, we can be sure that the keyword IF is always followed by a left parenthesis, some text — the condition —- that may contain parentheses, a right parenthesis and a letter. Thus, we could write a Lex rule for the keyword IF like:

This rule says that the pattern the lexeme matches is just the two letters IF. The slash says that additional pattern follows but does not match the lexeme. In this pattern, the first character is the left parentheses. Since that character is a Lex metasymbol, it must be preceded by a backslash to indicate that it has its literal meaning. The dot and star match "any string without a newline." Note that the dot is a Lex metasymbol meaning "any character except newline." It is followed by a right parenthesis, again with a backslash to give that character its literal meaning. The additional pattern is followed by the symbol letter, which is a regular definition representing the character class of all letters.

Note that in order for this pattern to be foolproof, we must preprocess the input to delete whitespace. We have in the pattern neither provision for whitespace, nor can we deal with the possibility that the condition extends over lines, since the dot will not match a newline character.

For instance, suppose this pattern is asked to match a prefix of input:

the first two characters match IF, the next character matches \ ( , the next nine characters match .*, and the next two match \) and letter. Note the fact that the first right parenthesis (after C) is not followed by a letter is irrelevant; we only need to find some way of matching the input to the pattern. We conclude that the letters IF constitute the lexeme, and they are an instance of token if.

a)  Add the keyword while .

b)  Change the comparison operators to be the C operators of that kind.

c) Allow the underscore (_) as an additional letter.

! d) Add a new pattern with token STRING. The pattern consists of a double-quote ("), any string of characters and a final double-quote. However,

if a double-quote appears in the string, it must be escaped by preceding

it with a backslash (\), and therefore a backslash in the string must be represented by two backslashes. The lexical value, which is the string without the surrounding double-quotes, and with backslashes used to es-cape a character removed. Strings are to be installed in a table of strings.

Exercise 3 . 5 . 2 : Write a Lex program that copies a file, replacing each non-empty sequence of white space by a single blank.

Exercise 3 . 5 . 3 : Write a Lex program that copies a C program, replacing each by instance of the keyword float double.

! Exercise 3 . 5 . 4: Write a Lex program that converts a file to "Pig latin." Specifically, assume the file is a sequence of words (groups of letters) separated by whitespace. Every time you encounter a word:

If the first letter is a consonant, move it to the end of the word and then add ay.

If the first letter is a vowel, just add ay to the end of the word.

All nonletters are copied intact to the output.

! Exercise 3 . 5 . 5 : In SQL, keywords and identifiers are case-insensitive. Write a Lex program that recognizes the keywords SELECT, FROM, and WHERE (in any combination of capital and lower-case letters), and token ID, which for the purposes of this exercise you may take to be any sequence of letters and digits, beginning with a letter. You need not install identifiers in a symbol table, but tell how the "install" function would differ from that described for case-sensitive identifiers as in Fig. 3.23.