This law is based on the characteristics of human wants, i.e., wants are satiable.

H.H.Gossen, an Austrian Economist was the first to formulate this law in Economics in 1854. Therefore, Jevons called this law as “Gossen’s First Law of Consumption”. But credit goes to Marshall, because he perfected this law on the basis of Cardinal Analysis. This law is based on the characteristics of human wants, i.e., wants are satiable.

Marshall states the law as, “the additional benefit which a person derives from a given increase of his stock of a thing, diminishes with every increase in the stock that he already has”.

2.        The marginal utility of money of the consumer remains constant.

3.        The consumer should be a rational consumer and his aim is to attain maximum satisfaction with minimum expenditure.

4.        The units of the commodity consumed must be reasonable in size.

5.        The commodity consumed should be homogeneous or uniform in character like weight, quality, taste, colour etc.

6.        The consumption of goods must take place continuously at a given period of time.

7.        There should be no change in the taste, habits, preferences, fashions, income and character of the consumer during the process of consumption.

The Law of Diminishing Marginal Utility states that if a consumer continues to consume more and more units of the same commodity, its marginal utility diminishes. This means that the more we have of a thing, the less is the satisfaction or utility that we derive from the additional unit of it.

“The Law of Diminishing Marginal Utility’. 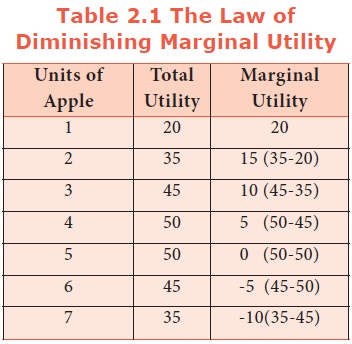 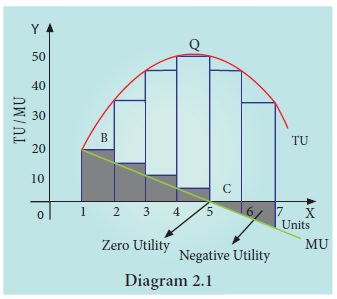 1.        Utility cannot be measured numerically, because utility is subjective.

3.        This law is not applicable to indivisible commodities.

Exceptions to the Law

Importance or Application of the Law of DMU

1.        The Law of DMU is one of the fundamental laws of consumption. It has applications in several fields of study.

2.        This law is the basis for other consumption laws such as Law of Demand, Elasticity of Demand, Consumer’s Surplus and the Law of Substitution etc.

3.        The Finance Minister taxes a more-moneyed person more and a less-moneyed person less. When a person’s income rises, the tax-rate rises because the MU of money to him falls with every rise in his income. Thus, the Law of DMU is the basis for progressive taxation.

4.        This law emphasises an equitable distribution of wealth. The MU of money to the more-moneyed is low. Hence, redistribution of income from rich to poor is justified.