F.W.EdgeWorth (English Economist) and Vilfredo Pareto (Italian Economist) criticised the Cardinal Utility Approach. They assumed that utility cannot be measured absolutely, but can be compared or ranked or ordered by ordinal numbers such as I, II, III and so on. Edgeworth first developed a more scientific approach to the study of consumer behaviour, known as “Indifference Curve Approach” in1881. In 1906, Vilfredo Pareto modified the “Edgeworth Approach”. Again J.R.Hicks and R.G.D.Allen refined the Indifference Curve Approach in 1934. Later, in 1939 J.R.Hicks in his book “ Value and Capital” gave a final shape to this “Indifference Curve Analysis”. 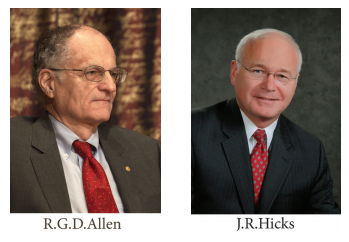 The theory of indifference curve was given by J R Hicks and RJD Allen, ‘A reconsideration of the theory of value’, Economics in 1934.

1.        The consumer is rational and his aim is to derive maximum satisfaction.

2.        Utility cannot be cardinally measured, but can be ranked or compared or ordered by ordinal number such as I, II, III and so on.

3.        The Indifference Curve Approach is based on the concept “Diminishing Marginal Rate of Substitution”.

4.        The consumer is consistent. This assumption is called as the assumption of transitivity. If the consumer prefers combination A to B and B to C, then he should prefer A to C. If A>B and B>C, then A>C.

An indifference schedule may be defined as a schedule of various combinations of two commodities which will give the same level of satisfaction. In other words, indifference Schedule is a table which shows the different combination of two goods that gives equal satisfaction to the consumer. 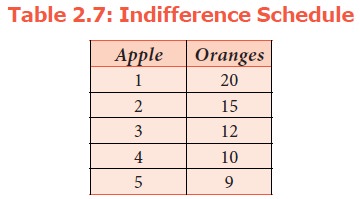