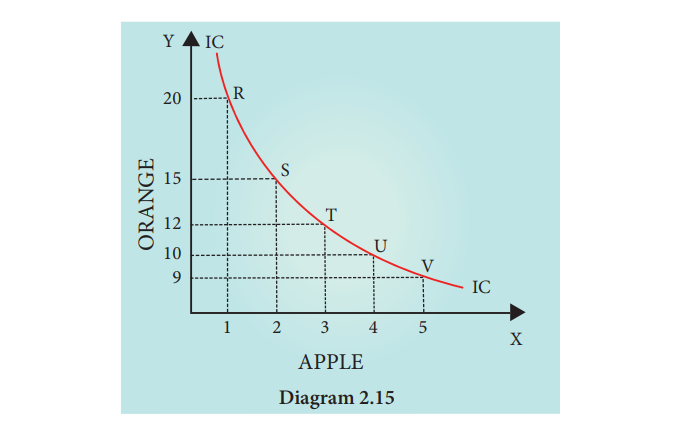 Different combinations of two commodities (as found in Indifference Schedule) can be presented in a diagram.

Different combinations of two commodities (as found in Indifference Schedule) can be presented in a diagram. Then consumer gets different points and when such points are connected, a curve is obtained. The said curve is called as “Indifference Curve”. Therefore, an indifference curve is the locus of all combinations of commodities from which the consumer derives the same level of satisfaction. It is also called “Iso-Utility Curve” or” Equal Satisfaction Curve”. Indifference Curve is illustrated in diagram 2.15. X axis represents apple and Y axis represents orange. Point ‘R’ represents combination of 1 apple and 20 oranges, at ‘S’ 2 apples and 15 oranges and at ’T’ 3 apples and 12 oranges. Similarly UKV points are obtained. These five points give the same level of satisfaction. The consumer will be neither better off nor worse off in choosing any one of these points. When one joins all these five points (RS, T) U and V one can get the Indifference Curve ‘IC’.