Demand in economics means desire backed up by enough money to pay for the good demanded.

Demand is essential for the creation, survival and profitability of a firm. “Demand in economics is the desire to possess something and the willingness and the ability to pay a certain price in order to possess it”.

Time : Demand always means demand per unit of time, per day, per week, per month or per year.

Market : Demand is always related to the market, buyer and sellers.

Amount : Demand is always a specific quantity which a consumer is willing to purchase.

Demand depends upon price. This means demand for a commodity is a function of price. Demand function mathematically is denoted as,

The Law of Demand was first stated by Augustin Cournot in 1838. Later it was refined and elaborated by Alfred Marshall.

The Law of Demand says as “the quantity demanded increases with a fall in price and diminishes with a rise in price”.

“The Law of Demand states that people will buy more at lower price and buy less at higher prices, other things remaining the same”.

Assumptions of Law of Demand

2.        The taste, habit and preference of the consumer remain the same.

4.        There should be no substitutes for the commodity in study. 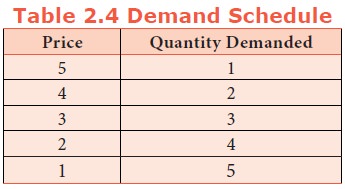 The law of demand explains the relationship between the price of a commodity and the quantity demanded of it. 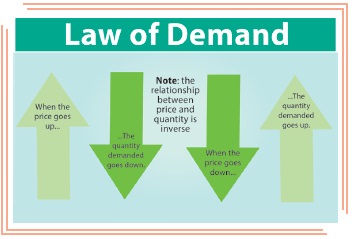 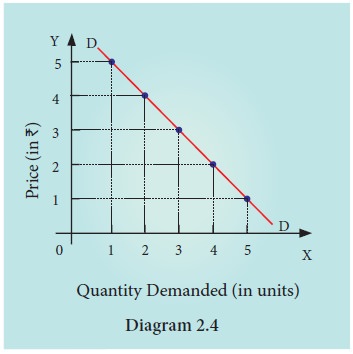 Market Demand for a Commodity 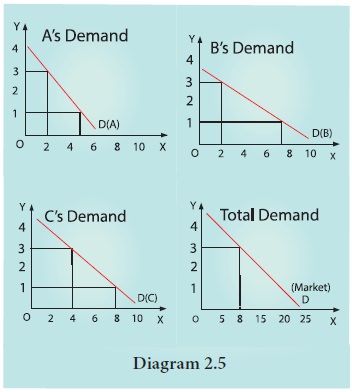 As in the case of individual demand schedule, the Market Demand Curve is at a price, at a place and at a time.

2.        Changes in Weather: An unusually dry summer results in a increase in the demand for cool drinks.

3.        Taxation and Subsidy: If fresh taxes are levied or the existing rates of taxation on commodities are increased their prices go up. The subsidies will bring down the prices. Therefore taxes reduce demand and subsidies raise demand.

5.        Changes in Savings: Savings and demand are inversely related.

6.        State of Trade Activity: During the periods of boom and prosperity, the demand for all commodities tends to increase. On the contrary, during times of depression there is a general slackening of demand.

7.        Advertisement: In advanced capitalistic countries advertising is a powerful instrument increasing the demand in the market.

8.        Changes in Income: An increase in family income may increase the demand for durables like video recorders and refrigerators. Equal distribution of income enables poor to get more income. As a result consumption level increases.

5. Exceptions to the law of demand 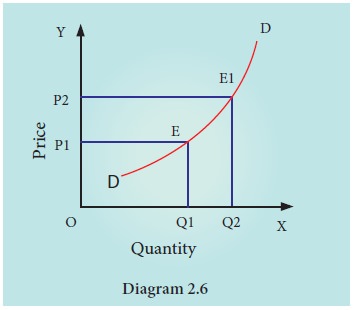 In the diagram 2.6, DD is the demand curve which slopes upwards from left to right. It shows that when price is OP1, OQ1 is the demand and when the price rises to OP2, demand also extends to OQ2.

1.        Giffen Paradox: The Giffen good or inferior good is an exception to the law of demand. When the price of an inferior good falls, the poor will buy less and vice versa.

2.        Veblen or Demonstration effect: Veblen has explained the exceptional demand curve through his doctrine of conspicuous consumption. Rich people buy certain goods because it gives social distinction or prestige. For example, diamonds.

3.        Ignorance: Sometimes, the quality of the commodity is judged by it’s price. Consumers think that the product is superior if the price is high. As such they buy more at a higher price.

4.        Speculative effect: If the price of the commodity is increasing then the consumers will buy more of it because of the expectation that it will increase still further. Eg stock markets.

5.        Fear of shortage: During times of emergency or war, people may expect shortage of a commodity and so buy more.

7. Extension and Contraction of Demand 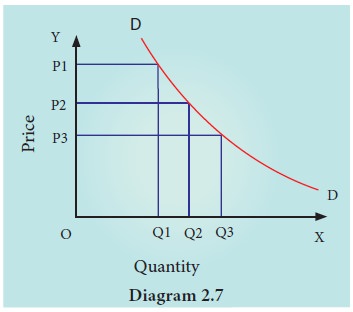 9. Shift in the Demand Curve

A shift in the demand curve occurs with a change in the value of a variable other than its price in the general demand function. An increase or decrease in demand due to changes in conditions of demand is shown by way of shifts in the demand curve.

On the right hand side of the diagram 2.8, the original price is OP1 and the quantity demanded is OQ1 . Due to changes in other conditions, the quantity purchased has increased to OQ2 . Thus the demand curve shifts to the right d1d1. This is called increase in demand.

‘Extension’ and ‘Contraction’ of demand follow a change in price. Increases and decreases in demand take place when price remains the same and the other factors bring about demand changes.