This concept is based on the Law of Diminishing Marginal Utility.

Alfred Marshall defines consumer’s surplus as, “the excess of price which a person would be willing to pay a thing rather than go without the thing, over that which he actually does pay is the economic measure of this surplus satisfaction. This may be called consumer’s surplus”.

2.        The marginal utilities of money of the consumer remain constant.

3.        There are no substitutes for the commodity in question.

5.        Utility of one commodity does not depend upon the other commodities.

Consumer’s surplus = What a person is willing to pay – What he actually pays.

The measurement of consumer’s surplus is illustrated in Table 2.3.

The concept of Consumer’s Surplus can also be explained with the help of a diagram. 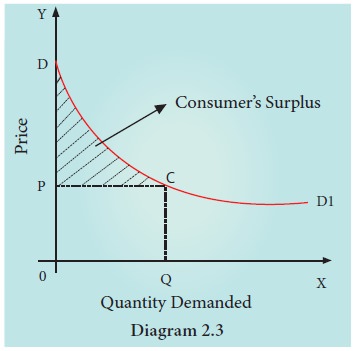 1.        Utility cannot be measured, because utility is subjective.

2.        Marginal utility of money does not remain constant.

3.        Potential price is internal, it might be known to the consumer himself.