Arrival of Europeans and the Aftermath - The Dutch | 11th History : Chapter 16 : The Coming of the Europeans

The first Dutch expedition to the South East Asia was in 1595 by a trader (Jan Huyghen van Linschoten), a merchant from Netherlands who lived in Lisbon.

The first Dutch expedition to the South East Asia was in 1595 by a trader (Jan Huyghen van Linschoten), a merchant from Netherlands who lived in Lisbon. There were several companies floated by the traders and individuals to trade with the East. The state intervened and amalgamated them all and created a Dutch East India company in 1602 [known as the United East Indies Company (in Dutch: Verenigde Oost-Indische Compagnie-abbreviated to VOC). The newly created company established its hold over the Spice Islands (Indonesia). In 1641 the Dutch captured Malacca from the Portuguese and in 1658 the Dutch forced Portuguese to part with Ceylon. The Dutch were successful in Spice Islands but they suffered reverses in India at the hands of the British. 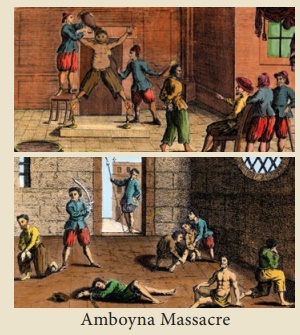 The Portuguese who established a control over Pulicat since 1502 were overthrown by the Dutch. In Pulicat, located 60 kilometers north of Chennai, the Dutch built the Castle Geldria. The remains of this 400 year old fort can be seen even now. This fort was once the seat of Dutch power. The Dutch established control of Masulipatnam in 1605 and they established their settlement at Pulicat in 1610. The other Dutch colonial forts and possessions include Nagapattinam, Punnakayal, Porto Novo, Cuddalore (Tiruppathiripuliyur) and Devanampatinam. 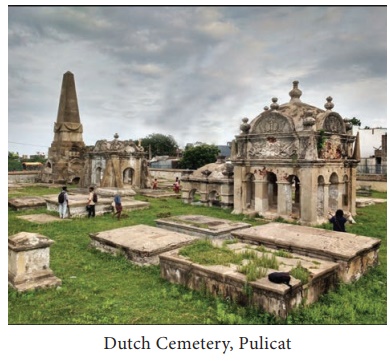 Pulicat served as the Coromandel headquarters of the Dutch East India Company. Diamonds were exported from Pulicat to the western countries. Nutmeg, cloves, and mace too were sent from here to Europe. A gun powder factory was also set up by the Dutch to augment their military power.

One less known fact about the Dutch is they were involved in slave trade. People from Bengal and from settlements such as Tengapattinam and Karaikal were brought to Pulicat. The Dutch employed brokers at Madras for catching and shipping slaves. Famines, droughts and war that resulted in food shortage led to the flourishing of the slave trade.

Wil O Dijk, a Ph.D. Scholar at Leiden University in one of her research papers noted that the passenger list of slaves transported in VOC ships within and from the Bay of Bengal from June 1621 to November 1665 showed a total of 26,885 men, women and children – of which 1,379 died. She further wrote that the export of Coromandel slaves surged during a famine caused by the Nayak rulers of Thanjavur, Senji and Madurai, after the fall of Vijayanagara empire.

A subsequent invasion of the Bijapur army led to the destruction of fertile agricultural lands of Thanjavur pushing more people into slavery. This time (1646) around 2118 slaves, mostly drawn from places situated along the coasts like Adirampattinam, Tondi and Kayalpattinam.