Arrival of Europeans and the Aftermath - The Danes | 11th History : Chapter 16 : The Coming of the Europeans

Denmark and Norway (together till 1813) possessed colonial settlements in India and Tamil Nadu.

Denmark and Norway (together till 1813) possessed colonial settlements in India and Tamil Nadu. Tarangambadi or Tranquebar in Tamil Nadu, Serampore in West Bengal and Nicobar Islands were their possessions in India. On March 17, 1616 the King of Denmark, Christian IV, issued a charter and created a Danish East India Company. This Company did not get any positive response from the Danish traders. Admiral Ove Gjedde led the first expedition to Ceylon in 1618. The Danes could not get any trade contract in Ceylon. While they were returning in disappointment their main vessel was sunk by the Portuguese at Karaikkal. Thirteen stranded sailors with their trade director Robert Crappe were taken to the Nayak ruler of Thanjavur. Robert Crappe ably negotiated with the Thanjavur King and struck an agreement. According to the agreement signed on 20 November 1620, the Danes received the village of Tarangambadi or Tranquebar and the right to construct a Fort there. 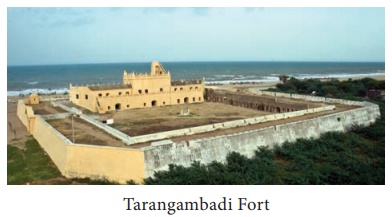 The Danish fort at Tarangambadi was vulnerable to high tidal waves which frequently damaged roads and houses. Despite their involvement in the Thirty Years War and the financial loss they suffered, the Danish managed to set up a factory at Masulipatnam. Small trading posts were established at Pipli (Hoogly River) and Balasore. Investors in Denmark wanted to dissolve the Danish East India Company, but King Christian IV resisted it. Finally after his death in 1648 his son Frederick abolished it.

A second Danish East India Company was started in 1696. Trade between Denmark and Tarangambadi resumed and many new trade outposts were also established. The Nayak king of Thanjavur gifted three more villages surrounding Tarangambadi. Two Danish Missionaries, the first protestant missionaries, arrived on 9 June 1706. The Danish settled in Andaman and Nicobar in 1755, but due to the threat of malaria they abandoned it in 1848. During the Napoleonic wars the British caused heavy damage to their possessions. Serampore was sold to the British in 1839 and Tranquebar and other settlements in 1845.

The Danes in Tamil Nadu

The Danish Fort built in Tarangambadi is still intact. Bartholomaeus Ziegenbalg along with Heinrich Pluetshau arrived in Tranquebar in September 1706, as the first Lutheran missionaries in India. They began preaching, and baptized their first converts within ten months of their stay. Their work was opposed both by Hindus and by the local Danish authorities, and in 1707-08 Ziegenbalg had to spend four months in prison on a charge that by converting the natives he was encouraging rebellion.

The Copenhagen Missionary Society wanted to encourage an indigenous Christian Church, and accordingly instructed its missionaries simply to preach the Gospel, and not to bother about other matters. Ziegenbalg, however, contended that a concern for the physical welfare of “others” was implicit in the Gospel.

Ziegenbalg set up a printing press, and published studies of the Tamil language and of Indian religion and culture. His translation of the New Testament into Tamil in 1715 was first in any Indian language. The church building that he and his associates constructed in 1718 is still in use today. He succeeded in establishing a seminary for the training of local clergy. When he died on 23 February 1719, he left behind a full Tamil translation of the complete Bible and of Genesis to Ruth (Bible Story book series), many brief writings in Tamil, two church buildings, the seminary, and 250 baptized Christians.