The Europeans were quite aware of the wealth and power of the Mughals, and English poets even wrote about the fabulous “wealth of India”.

This was the period when the Mughal empire was at the peak of its power. The Europeans were quite aware of the wealth and power of the Mughals, and English poets even wrote about the fabulous “wealth of India”. Travellers from all parts of Europe visited India regularly during the sixteenth and seventeenth centuries. The journals of their travels present a detailed contemporary account of the empire and society in India.

By 1600 Akbar had achieved his imperial dream and extended the frontiers of the Mughal empire through his conquests in Rajasthan and Gujarat. Gujarat was conquered in 1573, and this gave the Mughal empire valuable access to the port of Surat, which was the gateway to west Asia and Europe. Besides trade, the ships carrying pilgrims to Mecca left from Surat. The importance of Surat to the Mughals can be appreciated from the fact that Surat had two governors, one the governor of the city, and the other, the governor of the castle which had been built on the river Tapti to protect the city. The governor of the city was in charge of civilian affairs and collecting the revenues from customs duties. 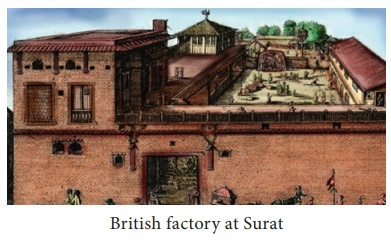 Akbar had also tried to extend his empire in the east beyond Bihar by conquering Bengal. But Bengal was not really integrated into the empire until nearly three decades later, when it became one of the provinces (subah) under Jahangir. Under Akbar, the revenue system of the empire had been revamped by Todar Mal so that a unified system of governance and revenue collection could function throughout the empire. At his death, therefore, Akbar left a powerful, economically prosperous and well-administered empire.

The Dutch, followed by the English, arrived in Surat in the early years of the 1600s to begin their trading activities. The Mughal governor permitted them to trade, and to set up their “factories” (as the business premises of the European traders which also functioned as warehouses were termed), but they were not allowed to have any territorial authority over any part of the city. This frustrated their ambitions to follow the Portuguese model.

The English acquired the islands of Bombay in 1668, and set up their headquarters in Bombay in 1687. Their primary objective was to develop Bombay as an alternate base for their operations.

But Surat under the protection of the Mughal state still remained the preferred centre of commercial activity for the merchants.

South India, especially the Tamil region, presented a sharp contrast to the centralized stability of the Mughal empire in these decades. Politically the region was fragmented and unsettled. Under Vijayanagar rule, three Nayak kingdoms had been set up in the Tamil region: in Madurai, Thanjavur and Senji. The objective was to provide financial and manpower resources to the empire. After the defeat of Vijayanagar in 1565 in the Battle of Talikota by the combined forces of the rulers of Ahmednagar, Bijapur and Golkonda, the central authority of the once dominant kingdom became very weak. The Nayak kingdoms became virtually autonomous, though they made a ritualistic acknowledgment of the authority of the Vijayanagar emperor. In addition to the larger Nayak kingdoms, several local chiefs also controlled some parts of the region. The most notable of them was probably the Setupati of Ramanathapuram, who was also keen to assert his independence. Between 1590 and 1649 the region witnessed several military conflicts arising out of these unsettled political conditions. 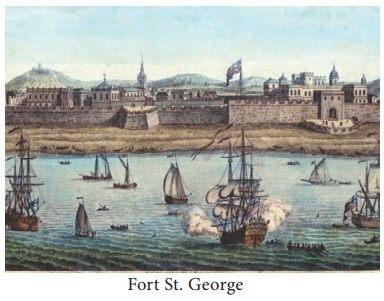 Madurai and Thanjavur fought several times to establish their superiority. There were also rebellions against the Vijayanagar emperor. Besides these on-going conflicts, Golkonda invaded the Coromandel in 1646 and annexed the area between Pulicat and San Thome, which also changed the political scenario in the region.

The Dutch and the English were able to acquire territorial rights on the east coast during these years. They realized that they needed a base on the Coromandel coast to access the piece goods needed for trading with the spice-producing islands of Indonesia. The Dutch had successfully negotiated to acquire Pulicat (Palaverkadu) from the Nayak of Senji and constructed a fort there. The English got a piece of land further south from the local chief, Damarla Venkatadri Nayak on which they built Fort St. George in 1639. Thus an English settlement came up which eventually grew into Chennai (Madras), the capital of the Madras Presidency.

Emperor Aurangzeb began an ambitious programme of extending his empire south to the Deccan, and the kingdoms of Ahmednagar, Bijapur and Golkonda were conquered in the 1680s. This extended the Mughal control of the Deccan as far south as Chennai. But the overextended Mughal empire soon began to reveal its inherent weakness. This became most apparent when the Marathas, under Shivaji, began to grow in power and military strength. They attacked Surat with impunity in 1664, though it was soon abandoned. But their second raid in 1670 devastated Surat and its trade took several years to recover. This seriously challenged the claim of Mughal invincibility and it sounded the beginning of the gradual disintegration of the Mughal empire.

In the 1660s, after the attack on Surat, Shivaji turned his attention to south India, and defeated the Nayaks of Senji and Thanjavur. Though Senji was conquered by the Mughals a few years later, Thanjavur survived as a Maratha-ruled state. The Maratha kings, with their inclusive policy of assimilating Tamil intellectual and cultural traditions, made Thanjavur the cultural capital of the Tamil region.

Aurangzeb, the last of the “great Mughals”, died in 1707. One of the major developments following his death was the establishment of what have been called ‘successor states’. Mughal viceroys in various parts of the country Oudh, Bengal, Hyderabad and the Carnatic set themselves up as independent rulers. The English and the Dutch had understood this vulnerability of the Mughal state.

In Bengal and the Carnatic, the Nawabs had borrowed heavily from the English, and assigned vast tracts of land to them so that the English could collect the land revenue as repayment for the loans. This marks the beginning of British rule as revenue collectors.

The name Carnatic originally refered to the region occupied by the Kannada-speaking people. In the eighteenth century it included the region lying between the Eastern Ghats and the Western Ghats, in the modern Indian states of Tamil Nadu, Karnataka, and southern Andhra Pradesh. The Nawab of Arcot controlled this region.

By this time the Dutch had given up Pulicat and moved their headquarters further south to Nagapattinam. They had decided to shift their focus to the spice-producing islands of Indonesia and established their capital at Jakarta (Batavia). Chennai, in the meantime, had grown into a prosperous town. The English, after many years of struggle, became a power to reckon with in the region. Surat continued to suffer due to the uncertain political conditions, and by 1750, the local merchants had begun to declare themselves to be “under the protection” of the Dutch or the English in order to feel more secure. Bombay therefore became a viable alternative as a trade centre, attracting merchants from Surat and other parts of Gujarat. 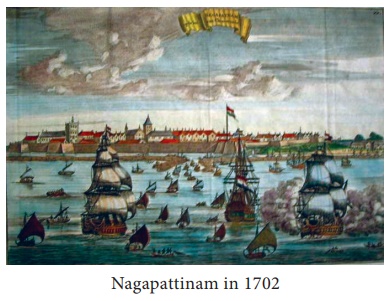