Arrival of Europeans and the Aftermath - Portuguese in India | 11th History : Chapter 16 : The Coming of the Europeans

During his first voyage Vasco da Gama came with 170 men in three vessels.

Arrival of Europeans and the Aftermath

During his first voyage Vasco da Gama came with 170 men in three vessels. The cordiality of Zamorin, the ruler of Calicut, made him comfortable. He journeyed back on 29 August 1498 with only fifty five surviving men and of the three ships, two were laden with Indian goods. Gama’s success made Portugal to send 1200 men with 13 vessels under Pedro Alvarez Cabral. 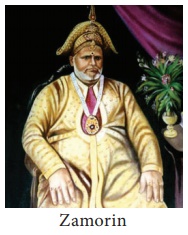 On 29 October 1502 Gama visited Calicut for the second time with a fleet of 20 vessels. Gama moved from Calicut to Cochin as its harbour was better. He soon realized that the monopolistic trade of the Arabs needed to be broken if European trade was to thrive. He used the enmity between the two Hindu rulers of Cochin and Calicut for this purpose. Before he returned to Portugal he established a factory [warehouse] in Cochin and a prison at Kannur. 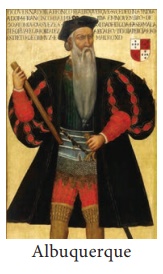 Consolidation of the Portuguese Trade

The Portuguese stopped yearly expeditions and instead decided to appoint a Viceroy. The first Viceroy was Francisco d’ Almeida who followed what is known as ‘Blue Water Policy,’ and accordingly, he added more ships to strengthen the navy rather than adding more settlements. He destroyed the fleet of Zamorin and a fleet sent by the Sultan of Egypt. He befriended the ruler of Cochin and built fortresses at Cochin, Kannur and other places on the Malabar coast.

Albuquerque (1509-1515), the successor of Almeida, was the real founder of the Portuguese empire in India. He defeated Yusuf Adil Khan, the ruler of Bijapur in 1510 and captured Goa. He developed Goa into a centre of commerce by making all the ships sail on that route. He encouraged people of all faiths to settle in Goa. He was in favour of Europeans marrying Indian women and settling down in Portuguese controlled territories. His conquest of Malacca (in Malaysia) held by the Muslims, who commanded the trade route between India-China and Mecca and Cairo, extended the empire.

He attacked the Arabs and was successful in taking Aden. In 1515 he took control of Ormuz.

Two more viceroys played a significant role in consolidating the Portuguese empire in India. They are Nino da Cunha and Antonio de Noronha. Da Cunha occupied Bassein and Diu in 1534 and 1537 respectively. The port of Daman was wrested from the hands of Imad-ul Mulk in 1559. Meanwhile in the middle of the sixteenth century, the Portuguese control over Ceylon increased with the completion of a fort in Colombo. It was during the period of De Noronha (1571) the Mughal ruler Akbar visited Cambay in Gujarat and the first contacts between the Portuguese and the Mughal emperor established. 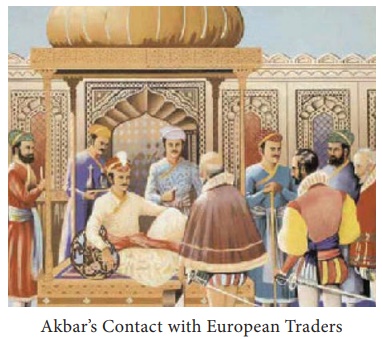 In 1580 Philip II, King of Spain, defeated Portugal and annexed it. In India the Dutch defeated the Portuguese in Ceylon and later seized the Portuguese fort on Malabar Coast. Thereafter rather than protecting their settlements in India, Portuguese began to evince greater interest in Brazil.

The Impact of Portuguese Presence

·        For the first time in the political history of India the Europeans conquered and seized territories from the Indian rulers.

·        Indian rulers remained divided and Europeans took advantage of it.

·        The Portuguese could contain the monopolistic trade of the Arabs. But it did not really help them. Instead, it benefited the British who removed pirates on the sea routes and made the sea voyage safe.

·        The marriages between Europeans and Indians, encouraged by the Portuguese in the territories occupied by them, created a new Eurasian racial group. They were the ones who were later taken to other Portuguese colonies in Africa and Asia.

·        The presence of Portuguese is very much evident in Chennai’s San Thome. Mylapore was the Portuguese ‘Black Town’. (Black Town of the British period was George Town)

·        Following the establishment of Portuguese settlements, Jesuit missionaries visited India. Notable among them are: 1. Fr. Roberto de Nobili, whose linguistic ability enabled him to write extensively in Tamil and Sanskrit. He is considered the father of Tamil prose. 2. Fr. Henriques introduced printing in Tamil and is called the father of printing press. 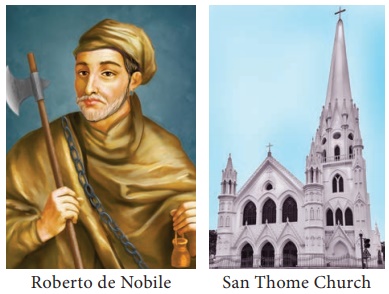 Clashes occurred between the Portuguese and the Muslim groups on the pearl fishery coast in the 1530s over the control of fishing and pearl diving rights and a delegation of Paravas complained to the Portuguese authorities at Cochin about the atrocities inflicted on them by Arab fleets and sought protection. Seizing the opportunity, the Portuguese sent their Roman Catholic priests (Padres) who converted thousands of fisher people to the Catholic religion. Following this St. Francis Xavier, one of the founders of the Society of Jesus, arrived in Goa in 1542 and travelled as far as Thoothukudi and Punnakayal to baptize the converts. Xavier established a network of Jesuit mission centres. His visit is evident from the shrines dedicated to St. Xavier and the towering churches that came up in the fishing villages on the Coromandel Coast.

The Portuguese threatened disruption of trade by violence unless their protection, cartaz, was bought. Under the cartaz system, the Portuguese exacted money from the traders as price for protection against what they termed as piracy. But much of this was caused by Portuguese freebooters themselves and so the whole system was a blatant protection racket.