Although biotechnology does not exclusively make use of cells but also of complete organisms or of cell constituents, knowledge of basic cell biology is re-quired to understand biotechnology to its full extent.

Although biotechnology does not exclusively make use of cells but also of complete organisms or of cell constituents, knowledge of basic cell biology is re-quired to understand biotechnology to its full extent.

Cells from all sorts of organisms are used in biotechnology. Not only prokaryotic cells like simple unicellular bacteria are used, but also eukaryotic cells, like cells of higher microorganisms, plants, and animals, are exploited. Those cell types are not dealt with in detail. The unifying concepts in cell biology and the diversification as far as relevant for pharma-ceutical biotechnology will be the main topic of discussion in this chapter.

The prokaryotes, to which the bacteria belong, represent the simplest cells in nature. A schematic illustration (Fig. 1) depicts a prokaryotic cell. Such a cell is in fact no more than cytoplasm surrounded by some surface layers, generally described as the cell envelope. In the bacterial world one distinguishes two main types of organisms. They are called Gram-positive or Gram-negative based on different beha-vior in a classical cell staining technique. The fundamental differences between these two prokar-yotic types are mainly apparent in the structure of the cell envelope. 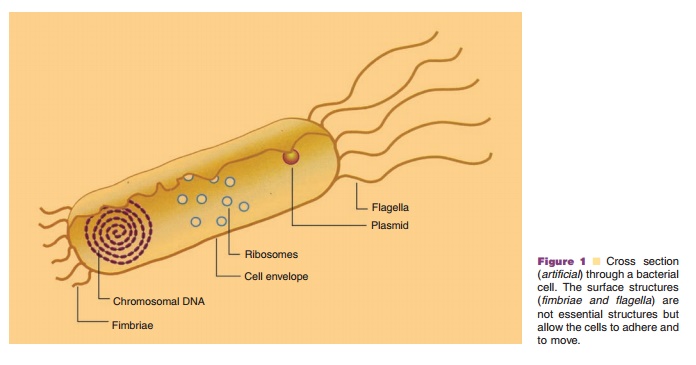 The bacterial cell envelope consists of a cyto-plasmic membrane and of a very characteristic wall structure called the peptidoglycan layer. The cells of Gram-positive organisms are multilayered with pep-tidoglycan while only one or two such layers are found in cells of Gram-negative organisms. However, the clearest distinction between the two types of bacterial cells is that in Gram-negative organisms the cell is surrounded by a very specific extra membrane layer, called outer membrane (OM) (Fig. 2). Next to the cytoplasmic membrane, also called the inner membrane (IM), the OM is a permeation barrier for substances that are transported into or out of the cell.

A prominent and very particular chemical constituent of the OM is the compound named lipopolysaccharide (LPS). Biopharmaceutical pro-ducts gained from Gram-negative organisms must be extensively purified especially when they are used as a pharmaceutical for man or animal, since LPS set free during the isolation of the product has, even in a very low concentration, severe toxic effects to man and animals.

In the bacterial cell DNA is generally organized in one large circular molecule. The bacterial DNA is not surrounded by a nuclear membrane and is not as complex in organization as DNA in eukaryotic cells. One generally refers to bacterial DNA as chromoso-mal DNA, analogous to the nomenclature in eukar-yotic cells. Bacteria may, apart from the chromosomal DNA, harbor autonomously replicating small DNA molecules, called plasmids. Functions that are essen-tial for a bacterial cell are usually encoded by the chromosome, whereas functions encoded by plasmids are generally in no way essential. Nevertheless, plasmids endow the bacterial cell with properties that may be very important for the survival of the bacteria. Antibiotic resistances and production of toxic pro-teins, for example, are well-known plasmid encoded traits. As we will see later, plasmids are used in biotechnology as important and basic tools for the recombinant DNA technology.

When we refer to plasmids as small DNA molecules, this is of course in comparison to the size of the chromosomal DNA. Besides, one has to realize that plasmids vary in size. Small plasmids, generally the relevant ones for biotechnology, harbor about 6000 DNA building units, called nucleotides. Chromosomal DNA of a bacterium contains at least 1000 times more nucleotides. The DNA content of an animal or plant cell on the other hand exceeds several hundred times that of a bacterial cell. Moreover, the DNA of the former cells is no longer organized in one molecule, but in several linear chromosomes. A popular way to illustrate this fast growingcomplexity of DNA molecules in nature is based on pages and books. One can easily write on one page the composition of the DNA of a small plasmid by its nucleotide composition, using the symbols A, C, G, and T for the various nucleotides in the DNA. To do the same for the bacterial chromosome, a book with about 1000 pages is needed. For an animal cell or a plant cell it requires a few hundred books, each containing about 1000 pages to describe the DNA.

Bacterial cells, like all cells, harbor in their cytoplasm the ribosomes as essential structures for protein synthesis, as well as a great variety of enzymes and other (macro)molecules required for the proper physiology of the cell. Most important, however, is that, apart from chromosome, ribosomes and some-times plasmids, generally no other distinct structures are visible in the cytoplasm of the bacterial cell, even when studied with an electron microscope. Furthermore, there are no compartments present in the cytoplasm of the prokaryotic cell.

Figure 3 presents a schematic picture of a plant cell as an example of an eukaryotic cell. The eukaryotic cell has a very complex structure, not only by the presence of cell organelles like the nucleus, mitochondria, and chloroplast (exclusively found in plant cells), but also by the presence of specific internal membranes and of vacuoles. This complex and compartmentalized struc-ture implies a complicated functional behavior and is one of the reasons that in the initial phase of modern biotechnology simple bacterial cells, easier to handle and more simple to modify, were prominently used. Nowadays, molecular biotechnologists use all sorts of eukaryotic cells, exploiting the fast growing insights in cell biology. 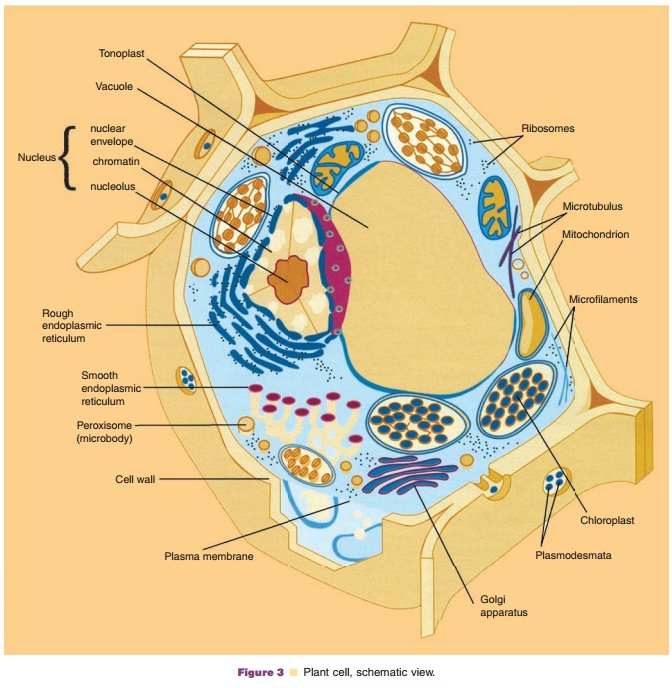