Biotechnology depends heavily on techniques to cultivate pro- and eukaryotic cells, since these cells are sources of bioproducts or of mediators of various bioconversions.

Biotechnology depends heavily on techniques to cultivate pro- and eukaryotic cells, since these cells are sources of bioproducts or of mediators of various bioconversions. The scale of culturing is an important issue in biotechnology. Experience from small scale cultures is not directly transferable to large scale culturing in manufacturing industries. What can be cultivated in small flasks in a research laboratory cannot always be cultivated efficiently on an indus-trial scale. Simply enlarging the culture devices from small flasks to tanks containing many thousand liters is not enough. Cultivation on an industrial level requires very sophisticated and delicate process technologies.

Some microbial species are very popular in biotech-nology since they can be cultivated in an easy and safe way. To microbial species with a long lasting tradition in biotechnology belong bacterial species like Clostridium acetobutyricum, Corynebacterium sp., Xanthomonas sp., Bacillus sp.,Lactobacillus sp. as wellas the fungi Saccharomyces cerevisiae (baker’s yeast), Penicillium sp. and Aspergillus sp.

In general, microbes can be cultivated either in vessels or tanks filled with an appropriate liquid growth medium or on plates containing a growth medium solidified with agar. Culturing in this way implies that the conditions for the growing cells gradually diminish, since nutrients are depleted by the growing cells and growth inhibiting metabolites gradually accumulate. Consequently, microbial growth under these condi-tions will stop after a while. However, there are culture devices, the continuous culture apparatus, which allow indefinite growth of the microorganisms. This is achieved by continuously adding fresh medium to the culture, meanwhile removing growing cells and metabolites by an overflow device. Under a proper regimen of addition and removal, a “steady state” situation where cells continuously grow is created. The suggestive name for such cultures is “continuous culture.” Most industrial biotechnology, however, is based on culturing in tanks without a supply and overflow device. Such culture devices are called “batch cultures.” 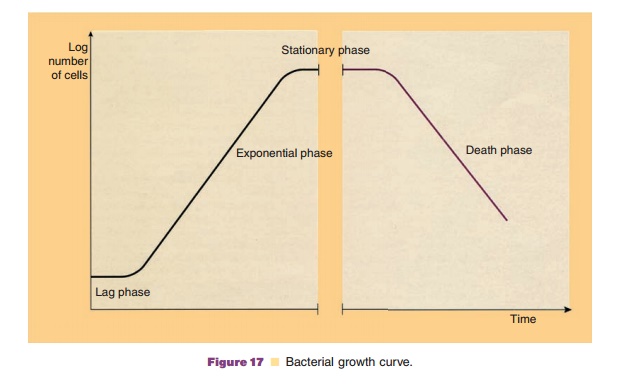 Figure 17 presents a typical picture of bacterial growth in a batch culture. There are several char-acteristic phases in the so-called bacterial growth curve. Bacteria generally do not immediately start multiplying when they are inoculated in a fresh medium. A phase, called the lag phase, where cells do not divide but gradually adapt to the specific growth conditions in the medium precedes the phase where all cells start to divide. This phase, the actual growth phase, is called the logarithmic or exponential phase. The exponential growth phase is for many biotechnological applications very relevant since most of the genes are then optimally expressed. The exponential phase is followed by the stationary phase, where active growth comes to an end due to depletion and spoilage of the medium.

The stage where the exponential growth is about to end is of interest for some biotechnological purposes. At that stage, for reasons that are not completely understood, some microorganisms start the synthesis of so-called secondary metabolites. These metabolic products are, according to their name, not essential for the basic cellular metabolism, but may be very relevant as bioproducts. Secondary metabolites relevant for pharmaceutical biotechnology are for example anti-biotics as produced by some microorganisms.

After some time the stationary phase is followed by a phase where the bacteria die off. This stage is clearly not of great interest for biotechnology.

The bacterial growth curve is not directly applicable for microbes that do not reproduce by binary fission. However, a lag phase preceding a phase of active growth and followed by a stationary phase is generally found.

Also in biotechnology time is money and maximum cell yields are therefore required. Thus one tries to keep the lag phase as short as possible and to postpone the onset of the stationary phase. The first goal is achieved by inoculating the tank with cells that, by proper preculturing, are optimally adapted to the medium in the tank. The second goal is achieved in various ways. A successful approach, especially when cells are limited in outgrowth by medium depletion, consists of adding fresh medium near the end of the exponential phase. This technique is called “fed batch culture.”

To achieve optimal growth of microorganisms it is not only essential to provide a medium with the proper nutrients, but also conditions like pH, oxygen tension and temperature have to be chosen appro-priately and should be controlled while cultivating. Last but not least, infection with other microorgan-isms should be prevented. This requires strict sterility measures and work protocols.

To give an idea about the impressive perfor-mance of fast growing microbial cells, such cells may grow with doubling times of about 30 minutes and cultures can easily reach densities of 109 cells per mL. If one cultivates bacterial cells on plates, a colony on such plate, appearing after one day or so, might easily harbor millions of cells.

Animal cells can be isolated out of a particular tissue after a protease (trypsin) treatment. When such cells are transferred to glass or plastic they will adhere and start growing, if supplied with a suitable liquidgrowth medium. A cell culture of this type is called a “primary” culture. Such cultures will die after a while and are thus not very useful for biotechnology.

Some animal cell types, however, become excep-tional in their growth characteristics when they are cultivated. The main characteristic is that the cell becomes immortal. Such cells are used to prepare “continuous” cell lines. They may survive for months or even years, as long as they are diluted and recultured at frequent intervals. Some cells of malignant origin or originating from normal cells transformed by a virus like the Epstein Barr virus are immortal and grow to high cell densities. For pharmaceutical biotechnology the latter cell lines may be of limited value since they are of malignant nature and may release transforming viruses as a contaminant for the pharmaceutical product. Most useful are non-malignant immortalized cell lines, e.g., 3T3 fibroblasts.

Some cell lines depend on a solid support for their growth; others can be cultivated in suspension which may be advantageous for biotechnology. Successful cultivation of animal cells in vitro requires a suitable, in general very complex, growth medium providing not only all nutritional requirements for the cells but also a number of specific growth factors and hormones. The pH must be buffered around 7.0 and proper osmotic conditions isotonic with the cell cytoplasm are required.

Animal cell cultivation is certainly much more complicated than cultivation of common microorgan-isms. For pharmaceutical biotechnology there are various safe cell lines available, each with their specific characteristics.

Plants have always been an important source of pharmacologically active compounds. The complex structure of many of these compounds precludes their chemical synthesis, certainly on a commercial scale. Many active compounds are extracted from intact plants or plant parts. Such compounds usually are present in very low quantities and this has triggered research into the use of alternative production methods.

Cell biologists have tried to produce high levels of active compounds in plant cell cultures but this has not been an easy task. Next to the problems associated with large scale cell cultures, a major problem with plant cells is that they can not be kept in the differentiated state. When fully differentiated plant tissues are excised to initiate a cell culture this differentiated state is usually lost. Often the com-pound of interest is made only in specialized tissues in the intact plants. Use of these tissues for cell culture initiation results in a significant decrease in the production of the compound of interest. The addition of plant hormones (e.g., auxins and cytokinins) may alleviate this problem, but up until now efficient production of pharmaceutically interesting com-pounds in plant cell culture systems is rare. Systems that are available are usually based on procedures involving repeated selection of cell lines with the highest production potential.

Production capacity of cell lines can be further improved by feeding to the culture strategically chosen cheaply available precursors for the com-pound of interest. The cells then perform the final and chemically most demanding biosynthetic steps. A better understanding of cellular differentiation processes combined with genetic modification tech-nology of plant cells may help in overcoming these problems and allow for a more efficient use of plantcell cultures in pharmaceutical biotechnology. To circumvent the plant culturing problems one might exploit the recombinant DNA technology, described before. Several of the plant genes which encode enzymes involved in biosynthesis of pharmaceutically active compounds have been cloned. Expression of such genes in heterologous host systems opens an explanta way for enzymatic synthesis of activecompounds.