As stated above, transfer of a recombinant DNA molecule to a cell is an essential step in DNA technology.

As stated above, transfer of a recombinant DNA molecule to a cell is an essential step in DNA technology. Some bacterial cells, like those of the species Bacillus subtilis which are frequently used in industrial biotechnology, are able to take up DNA under physiological conditions. This process is de-scribed as natural transformation. In most cases, however, microbial cells have to be forced by an unusual regimen to take up DNA. For example, in the case of microorganisms such non-physiological con-ditions are created by applying a heat shock to the host cells in the presence of high amounts of Ca2þ ions. An alternative technique used to force DNA uptake is electroporation. For that purpose DNA and cells are brought together in a cuvette which is then subjected to a vigorous electrical discharge. Under those artificial conditions the cell envelope is forced to open itself, after which DNA may enter through the “holes” that are created. The brute force in these techniques kills a large fraction of the cells, but sufficient cells survive, among which are several that took up DNA. The technique of electroporation is widely applicable and frequently used.

Next to direct transfer of recombinant DNA molecules as such, there is at least for transfer to bacterial cells the possibility to package DNA in a bacteriophage capsid and then to mimic the normal bacteriophage infection procedure (Fig. 11). Transfer to bacterial cells can also be achieved by making use of conjugation. Conjugation is a process where DNA transfer takes place by cell–cell mating. For 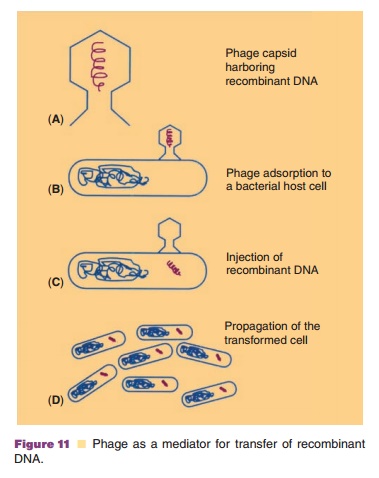 conjugation a special class of plasmids is required, so-called conjugative plasmids. If a cell with such a plasmid—the donor—meets a cell without such plasmid—the recipient—they may form together cell aggregates. In the so-called mating aggregate theplasmid from the donor has the ability to transfer itself, as a consequence of a conjugative replication process according to the rolling circle model, to the recipient cell. By manipulating the conjugative plas-mids one may create donors harboring recombinant DNA molecules which can then rather efficiently be transferred by cell–cell contact.

If an animal virus or a plant virus is used as vector for the recombinant DNA technology, one may exploit natural virus infection processes to transfer DNA to an animal or a plant cell. Like the case in microorganisms, DNA transfer to animal cells can be forced by a treatment with high amounts of Ca2þ ions or by another chemical treatment. Next to that, it is possible to inject DNA with a syringe into the nucleus of the cell. The latter technique (one could speak of a kind of micro-surgery) is feasible due to the relative large dimensions of the animal cells com-pared to bacteria and is also applied to plant cells. The technique is illustrated in Figure 12. The cell is brought on the tip of a thin glass tube and is fixed to the tube by suction at the other end of the tube. By means of a micromanipulator a small syringe filled with DNA is directed to the nucleus of the fixed cell and then the DNA is injected into the nucleus. 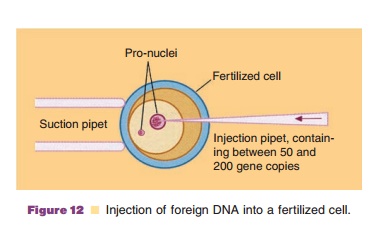 A very successful way to transfer DNA into plant systems is based on a special type of conjuga-tion. The soil bacterium, Agrobacterium tumefaciens, harbors a conjugative plasmid called Ti (acronym for tumor inducing). If such a bacterium infects wounded tissues of certain plants, part of the Ti-plasmid is transferred to a plant cell in a conjugation-like process. This transfer is followed by integration of the transferred DNA into the genome of the plant. The infected plant cells lose normal growth control and develop a tumor (a plant disease called crown gall). By manipulating the Ti-plasmid, such that its tumor inducing properties are lost and foreign DNA frag-ments are linked to it, any DNA can be transferred in a convenient way from the modified Agrobacterium donor to a plant cell. Figure 13 illustrates this remarkable process, where, in fact, biological king-dom barriers are crossed in a natural fashion. 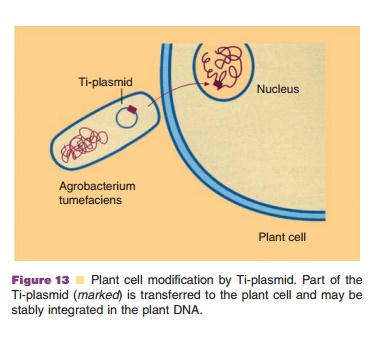 Since the wall of the plant cell is the main barrier for uptake of DNA, one has exploited protoplasts of plant cells (i.e., plant cells lacking walls) to introduce DNA. Protoplasts can take up DNA quite easily. It is feasible to regenerate from genetically modified protoplasts intact plant cells. Finally, a very artificial method to introduce DNA in plant tissue has been developed. Microprojectiles covered with DNA are shot with a gun into plant cells. In fact, many plant species that can not readily be genetically modified with any of the methods mentioned above can be modified using this rather bizarre gun method.

The various techniques that are used to transfer DNA are generally not very efficient and may cause, as stated before, extensive killing of cells. Moreover, the fate of the transferred DNA is not always predictable. For example, in some cases the intro-duced DNA is subject to nuclease-mediated break-down, while in animal or plant cells the introduced DNA does not always reach the nucleus, nor is it always integrated in a proper way. All methods to transfer DNA yield, in general, only a few cells that are vital and stable. Therefore, selection techniques are highly desirable to find these rare cells. Most selection techniques use a marker on the vector that codes for a selective property. Markers which code for a resistance towards a specific antibiotic substance are frequently used. If the cell that has to be modified is sensitive towards that antibiotic, the few modified cells from the transfer trial can easily be selected by bringing samples of the treated cells (either microbial cells, plant cells or animal cells) in a medium containing the relevant antibiotic. Only the cells that took up DNA and do maintain that DNA in their progeny will proliferate, all other cells are killed or, at least, do not grow. An alternative selection method uses recipient cells with specific growth deficiencies and vectors carrying genes which overcome such deficiencies.