Axial skeleton forms the main axis of the body. It consists of the skull, hyoid bone, vertebral column and thoracic cage.

Axial skeleton forms the main axis of the body. It consists of the skull, hyoid bone, vertebral column and thoracic cage.

The skull is composed of two sets of bones cranial and facial bones. It consists of 22 bones of which 8 are cranial bones and 14 are facial bones (Figure 9.7). The cranial bones form the hard protective outer covering of the brain and called the brain box. The capacity of the cranium is 1500 cm3.. These bones are joined by sut ures which are immovable. They are a paired parietal, paired temporal and individual bones such as the frontal, sphenoid, occipital and ethmoid. 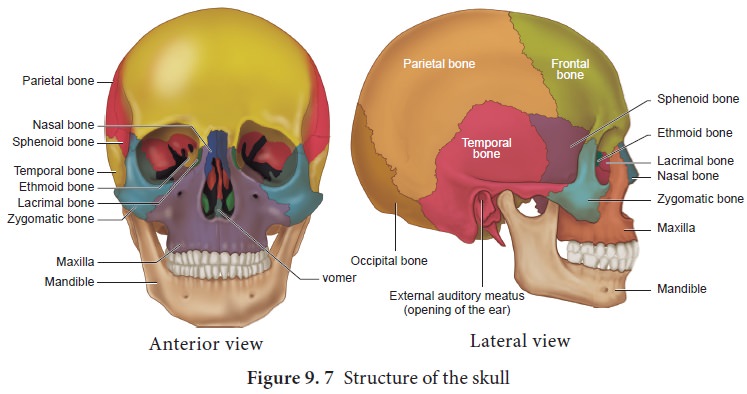 The large hole in the temporal bone is the external auditory meatus. In the facial bones maxilla,  zygomatic,  palatine,  lacrimal,  nasal  are  paired  bones  whereas mandible or lower jaw and vomer are unpaired bones. They form the front part of the skull. A single U-shaped hyoid bone is present at the base of the buccal cavity. It is the only one bone without any joint. Each middle ear contains three tiny bones - malleus, incus and stapes collectively are called ear ossicles . The upper jaw is formed of the maxilla and the lower jaw is formed of the mandible. The upper jaw is fused with the cranium and is immovable. The lower jaw is connected to the cranium by muscles and is movable. The most prominent openings in the skull are the orbits and the nasal cavity.

Foramen magnum is a large opening found at the posterior base of the skull. Through this opening the medulla oblongata of the brain descends down as the spinal cord.

b) The Vertebral Column

The vertebral column protects the spinal cord, supports the head and serves as the point of attachment for the ribs and musculature of the back.

Sternum is a flat bone on the mid ventral line of the thorax. It provides space for the attachment of the thoracic ribs and abdominal muscles. 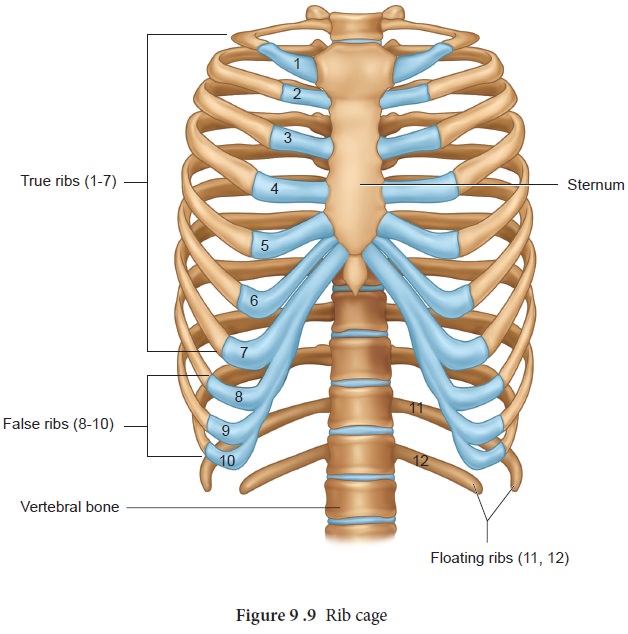