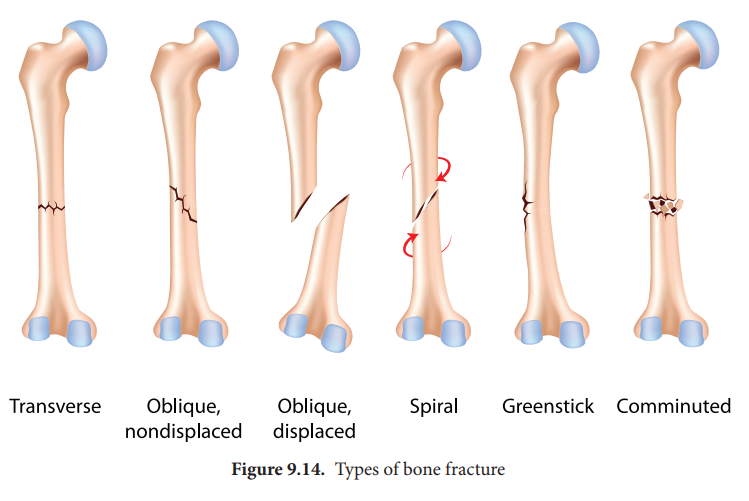 Even though the bones are strong, they are also susceptible to fractures or breaks.

Even though the bones are strong, they are also susceptible to fractures or breaks. Fractures may be classified based on the 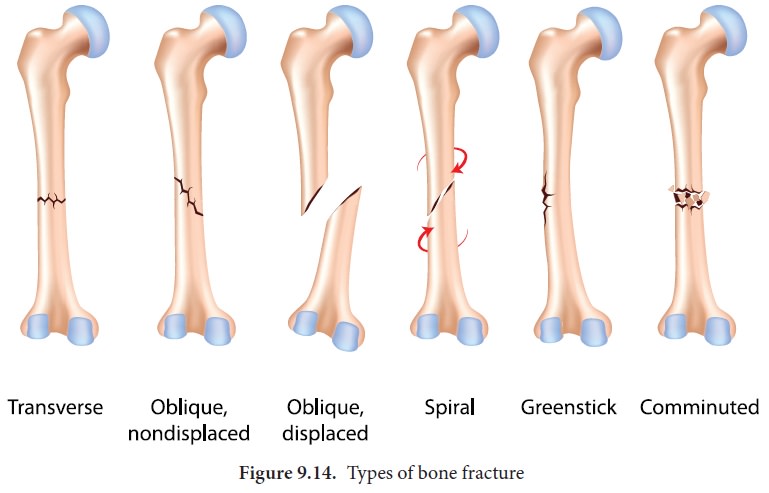 The following are the common types of fractures,

1.Tranverse - A fracture that is at right angle to the bone's long axis.

2. Oblique non-displaced-A fracture that is diagonal to the bone's long axis and the fractured bone is not displaced from its position.

3. Oblique displaced A fracture that is diagonal to the bone's long axis and the fractured bone is displaced from its position.

5. Greenstick - Bone breaks incompletely, just like a green twig breaks. It is common in children, because of the flexibility of the bones.

6 . Comminuted – Bone fragmented into three or more pieces. Particularly common in the aged, whose bones are brittle (hard but easily broken).

1. Mechanism and healing of a bone fracture

Bone is a cellular, living tissue capable of growth, self-repair and remodeling in response to physical stresses. In the adult skeleton, bone deposit and bone resorption occur. These two processes together constitute in remodeling of bone. There are four major stages in repairing a simple fracture (Figure 9.15). 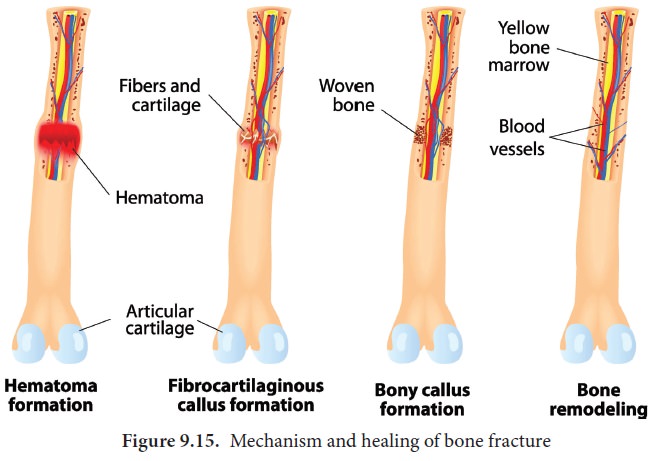 When a bone breaks the blood vessels in the bone and surrounding tissues are torn and results in haemorrhage. Due to this a haematoma, a mass of clotted blood forms at the fracture site. The tissues at the site becomes swollen, painful and inflammed. The death of bone cells, occur due to lack of nutrition.

Within a few days several events lead to the formation of soft granulation tissue called callus. Capillaries grow into the haematoma and phagocytic cells invade the area and begin to clean up the debris. Meanwhile the fibroblasts and osteoblasts invade from the nearby periosteum and endosteum and begin reconstructing of the bone. The fibroblasts produce fibres. The chondroblasts secrete the cartilage matrix. Within this repair tissue, osteoblasts begin forming spongy bone. The cartilage matrix later calcifies and forms the fibrocartilaginous callus.

New bone trabeculae begin to appear in the fibro cartilaginous callus. Gradually that is converted into a bony (hard) callus of spongy bone. Bony callus formation continues until a firm union is formed about two months later to an year for complete woven bone formation.

Bony callus formation will be continued for several months. After that the bony callus is remodelled. The excess material on the diaphysis exterior and within the medullary cavity is removed and the compact bone is laid down to reconstruct the shaft walls. The final structure of the remodelled area resembles like the unbroken bony region.