Skeletal muscle is attached to the bone by a bundle of collagen fibres known as tendon (Figure 9.1).

Skeletal muscle is attached to the bone by a bundle of collagen fibres known as tendon (Figure 9.1). Each muscle is made up of bundles of muscle fibres called fascicle. Each muscle fibre contains hundreds to thousands of rod-like structures called myofibrils that run parallel to its length. The connective tissue covering the whole muscle is the epimysium, the covering around each fascicle is the perimysium and the muscle fibre is surrounded by the endomysium. They control the voluntary actions such as walking, running, swimming, writing hence termed as voluntary muscles. 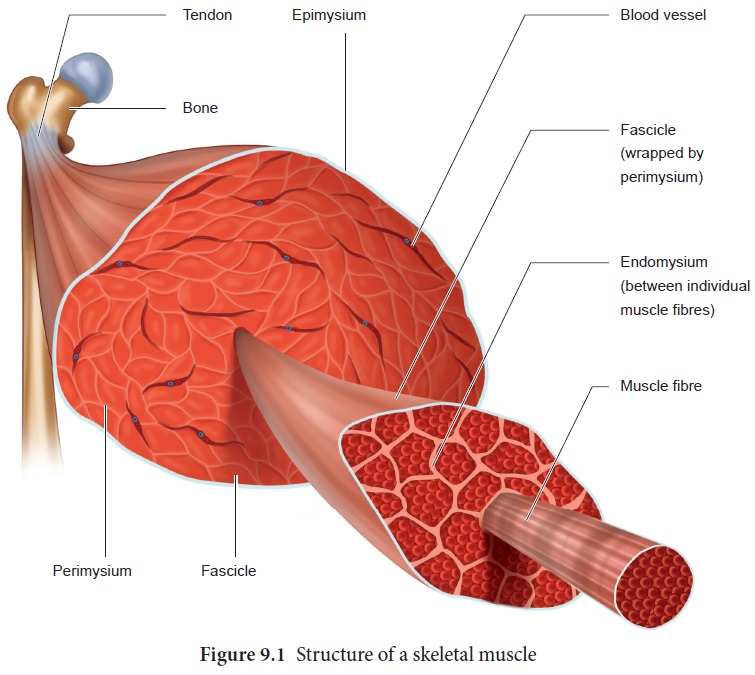 Structure of a skeletal muscle fibre

Each muscle fibre is thin and elongated. Most of them taper at one or both ends. Muscle fibre has multiple oval nuclei just beneath its plasma membrane or sarcolemma. The cytoplasm of the muscle fibre is called the sarcoplasm. It contains glycosomes, myoglobin and sarcoplasmic reticulum. Myoglobin is a red- coloured respiratory pigment of the muscle fibre. It is similar to haemoglobin and contains iron group that has affinity towards oxygen and serves as the reservoir of oxygen. Glycosomes are the granules of stored glycogen that provide glucose during the period of muscle fibre activity. Actin and myosin are muscle proteins present in the muscle fibre.

Along the length of each myofibril there are a repeated series of dark and light bands (Figure 9.2). The dark A-bands (Anisotropic bands) and the light I-bands (Isotropic bands) are perfectly aligned with one another. This type of arrangement gives the cell a striated appearance. Each dark band has a lighter region in its middle called the H-Zone (H-helles, meaning clear).

Each H-zone is bisected vertically by a dark line called the M- line (M-for middle). The light I-bands also have a darker mid line area called the Z–disc (from the German "Zwischenscheibe" the disc inbetween the I-bands).

The myofibrils contain the contractile element, the sarcomere which is the functional unit of the skeletal muscle. A Sarcomere is the region of a myofibril between two successive Z- discs. It contains an A-band with a half I-band at each end. Inside the sarcomere two types of filaments are present namely the thick and thin filaments.

The thick filaments extend the entire length of the A-band, the thin filaments extend across the I-band and partly into the A-band. The invagination of the sarcolemma forms transverse tubules(T–tubules) and they penetrate into the junction between the A and I-bands.